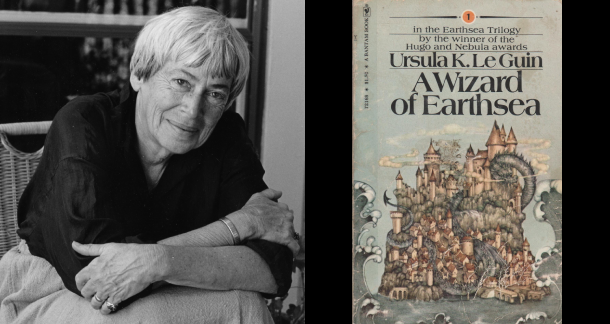 There is only one Ursula in the sci-fi/fantasy writing world. She inspired many of us before her passing a couple of years ago, paving the way for imaginative creatives (especially females). Without her Earthsea series it is very likely that Harry Potter would have never existed.

Forty years of writing allowed Le Guin to influence multiple generations of authors from various walks of life. She was born into the California Kroeber family. They appreciated art and ideas which encouraged her to love mythology and fairy tales.

In college she explored her talents and later married French historian Charles Le Guin. The start of her career was frustrating. Not many doors opened for her work. It was not until she opened herself up to writing original myths and fairy tale-type stories that she found her place in the publishing world.

But once she was true to herself and her background, support came pouring in. Her first science-fiction novel, Rocannon’s World, was considered groundbreaking. Released in 1966 it took on the issues of the times.

Without [the] Earthsea series it is very likely that Harry Potter would have never existed.

That first release sparked a popular series. Then came the ever monumental A Wizard of Earthsea. The Earthsea series sold millions worldwide.

Although known best for these series, her short stories are also captivating. Her ability to move from long form to short form and successfully write children's books as well seemed effortless. She knew how to craft a world and connect to readers.

In her later days interest grew in her poetry. Both fans and critics were highly invested in her verses because she was such a unique force in the writing world.

Throughout her career, Ursula K. Le Guin wrote twenty-one novels, twelve children's books, eleven short story collections, six poetry volumes, and four essay collections. After passing away, more works have been published, gaining even more acclaim. There are no limits to her importance even after death, as young writers continue to discover her work.

Not many authors accomplish as much as her, and even fewer receive the praise and success she found in life. She received nine Hugo awards, six Nebulas, the National Book Award, The Howard Vursell Award, the PEN/Malamud, and a National Book Foundation award for her distinguished contribution to American letters.

Though she never won a Pulitzer or the American Book Award, three of her novels were finalists for both. The writing speaks for itself.

She didn’t need prestige to be great, yet in 2000 the Library of Congress named her a “living legend.” In 2016 she joined the short list of authors to be published by the Library of America.

Just two years after that last honor, in early 2018, she died in her home at the age of 88. Her death stirred the writing community to pay many respects and tributes. From aspiring writers, across the indie circuit, and through the big names, her talents were celebrated and the loss mourned, but she lived a full life and enjoyed a rich career.

She would have been 91 today, and although she isn’t here with us physically, what she left behind was more than most of us could ever dream of.

Get Worlds of Exile and Illusion at Bookshop or Amazon

Get A Wizard of Earthsea at Bookshop or Amazon