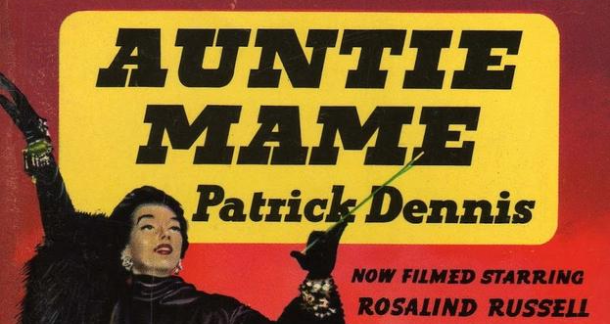 “Life is a banquet and most poor bastards are starving to death!”

The strongest, most eccentric female lead ever created was written by a man who struggled with his sexuality and died a servant to the wealthy after becoming the first author in U.S. history to have 3 consecutive books on the New York Times Best Seller list. Why hasn’t Hollywood optioned this story yet?

To some it would be considered a great tragedy, but to anyone who knows his writing, it is a final joke that may have been somewhat intentional. A true comedic writer, Patrick Dennis found humor at inappropriate times. It became his best skill. Instead of wallowing in his past after being wounded twice in WWII, or fearing his bisexuality, he created a unique auntie character who would inspire and thrill audiences for years to come.

I was first introduced to Auntie Mame on the silver screen. My own eye-opening Aunt, Aunt Peggy, swung this door wide for me and I never wanted it to close. I came to find that the movie had also been a Broadway musical, but the origin of this larger-than-life character began with a man who found his success in publishing. The book and its sequel were designed for laughter.

Auntie Mame embodies escapism without running away. She is the most flamboyantly expressive woman on the planet.

“She thought that 9AM was in the middle of the night.”

The author created a pen name, which is also the name of the young nephew character who finds himself thrust into a world of excitement and adventure under the care of his “crazy Aunt.” She does come off as an oddball, but her heart is made of gold and she depicts life as an art form.

I know so much about her, but it took me longer to find out about her originator. Patrick Dennis was actually, Edward Everett Tanner III, but his father nicknamed him Pat after a boxer and it stuck. He later took on this pseudonym and found success.

His writing was fictional, but the first person style worked well for him, I think, because he led a double life. He was a conventional married man with two children to some, but a flamboyant bisexual who became a well-known participant in the Greenwich Village’s gay scene in New York as well. Writing Mame allowed him to let out that side of himself that society so desperately closed off in those days. I believe she was his outlet. His window to freedom.

And what a window she was. Always changing her interests and throwing herself into insane new projects, she represented that part of ourselves that isn’t afraid to, "Live! Live! Live!” And the work held up.

Auntie Mame embodies escapism without running away. She is the most flamboyantly expressive woman on the planet.

Patrick Dennis took comedy to a new level by giving us a character who was graceful and extravagant, but also humble and accepting of others. She had money but wasn’t a snob. She was made to take us away from our troubles while still somehow forcing us to deal with them at the same time. She took art and class and grace and dignity and insanity, and wrapped them all in a big bubble, all while having fun and enjoying herself in order to teach her nephew lessons (even though they seemed like they were going nowhere at certain points).

It was brilliantly done.

I don’t think any other writer on the planet could ever do what Patrick Dennis did. Because he needed it so desperately. He needed her. And we all need her.

For anyone looking to read a perfectly developed story that offers laughs and confidence, The Auntie Mame books are the right fit, but Patrick Dennis didn’t stop there. He wrote others. He also had the good humor to write two hilarious parody memoirs.

Unfortunately his work went out of print in the 70s. With the social revolution of the 60s, people were less interested in art forms that peered out from a box. The walls had been torn down, and with that tastes changed.

Dennis went back to working under his legal name. He found employment as a butler and never let on to anyone that he had been a best-selling author. Whether out of embarrassment or as a joke, we’ll never know. He died of pancreatic cancer at the age of 55.

People may have forgotten his wit and charm in the 70s, but interest was revived as time went on. 80s babies like me and younger audiences who enjoyed classics brought it back to life. His books are back in print and available! The Auntie Mame movie has been re-released on DVD, Blu-Ray, and streaming services. The musical, Mame, is performed in theaters all across the United States.

99 years ago a writer was born. He didn’t live too long or die in a mansion, but he left behind the most memorable personality in all of comedic history.

“I always start writing with a clean piece of paper and a dirty mind.”