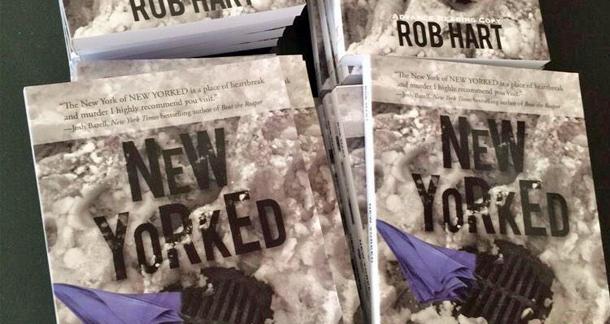 It's been two months since I checked in, and suddenly it feels like things are moving at warp speed. Screw the pleasantries. There's a lot to talk about, so let's dive in...

My galleys arrived, and damn if that wasn't a sweet moment. The first thing I did was flip through it for a little while, so I could savor all those words I fought over for so long, finally printed on a page. Then I showed it to my six-week-old daughter and she screamed at me, but I think that was less an editorial opinion and more that she was hungry.

A little later in the evening, as my wife and I were watching television, I realized the galley was sitting in my lap. I didn't even remember picking it up. I just found myself holding it.

Galleys are not cheap. They're a big investment in the success of a book. Polis is throwing down and wants to make sure this gets in as many hands as possible. It's paying off. I got a sneak peek of the list of bookstores that have already ordered, and I'm a little taken aback by the breadth of it. It's going to be stocked at destination bookstores. The kind of stores that, if I'm in a given city, I need to visit. It's an incredible feeling, seeing places I love will be carrying it. That there's so much enthusiasm and we're still this far out.

So much of this process crawls. You spend so much time waiting for the next thing you have to do. To be in a place where everything's finally hitting... it's incredible.

Polis also just released Not Even Past by Dave White in paperback. The build quality on this thing is nuts. Fantastic layout, nice heft, good feel. I hear the inside, the story part, is really good too, and I'll be digging into that soon. But I'm a nerd for the feel of a book, so it's hugely encouraging to see the time and care Polis puts into the printed product.

Back when I was on sub, whenever my agent sent me a new list of editors the book had gone out to, I would immediately head up to the sales floor of The Mysterious Bookshop and look for their stuff. See how their books felt. Some books feel cheap. And these don't. That's a nice place to be.

Speaking of The Mysterious Bookshop: That's where my release party is going to be! This is a place that’s near and dear to my heart. Not just because I’ve been a customer for years, and not just because it’s where my office is—but because it’s the last crime and mystery specialty store in Manhattan. It’s an institution. And it’s an honor to have my first major book event there.

You're all invited. You can RSVP to the Facebook event here, or just write it down on your calendar like a Luddite. June 9, 6:30 p.m., 58 Warren Street, Manhattan. There will be booze. And maybe snacks. But definitely booze. So if you're local or you're going to be in town, stop on by.

Going back to the galleys—I've got one to give away. One that I specifically put aside for LitReactor. But I don't want to do a regular giveaway. That would be boring.

A few years ago, Stephen Elliott started a "lending library" for galleys of his (excellent) book, The Adderall Diaries. It worked like this: You would e-mail him with your address, and your name would go on a list. You would get a copy of the galley in the mail. You'd read it, and then mail it along to the next person on the list. It was a smart, effective way to build word-of-mouth—and it was a great way to get more mileage out of fewer galleys.

Plus, it was fun. There was a social aspect to it, passing a book from person to person, even people you didn't know. There's something special about a book that's been held by another person. It's why I like getting books signed by their authors. I like that they held this mass-produced thing. That makes it unique again.

So I'm going to adopt Elliott's idea, which is the polite way of saying I am going to steal it.

If you want to read the book, sound off in the comments. The first person who raises his or her hand will be the first person to get it. Everyone else will go on a list (don't post your address—I'll get in contact with you for that).

Come June 9, or the end of the list, I'm going to ask that the book be mailed back to me. But you have to agree to a few terms.

Those first four are important. This won't work if the book sits on your to-be-read pile. I want to keep this as a souvenir, so signing it is a big deal, too. And it shouldn't cost more than a few bucks to mail it (which is also why you have to be a US resident).

Those last two items are optional. You don't have to do it. But it'd be nice if you did. Besides book sales being a plus, reviews are also hugely important—they contribute to search algorithms and discoverability (which means that if you read a book you love by anyone, you should review it).

I'm happy to say that City of Rose is done and handed in to Polis. Now I'm just waiting to find out whether it's any good, and how much surgery it's going to need. We've also bumped the release date to early 2016, as opposed to the original plan, which was October of this year.

October was exciting and ambitious, but maybe it was too ambitious. I feel more comfortable with 2016—so a six month gap as opposed to four—and I'm lucky enough to work with a publisher who's willing to re-assess a plan.

I will say this: Having gotten a couple of weeks out from handing it in, I'm excited at digging back in. I loved the editorial process on New Yorked. I like notes. I like making a book better. I really like fighting to keep the things I'm precious about. I'm happy with how City of Rose turned out but I know there's potential for it to be even better.

As for right now, I'm taking notes on book three and four in the Ash McKenna series, but I'm not starting them just yet—because I'm trying to finish the draft of an all-new, standalone project, separate from this series.

I think I read someplace that Stephen King will often draft a book, put it in a drawer, and then work on a draft for a new book. When he's done with the draft of the second book, he'll go back to the first. It's a way to keep things fresh and ensure his productivity isn't flagging between projects. So I'm going to make a run at that—see if I can finish the first draft of this new project (tentatively titled: The Warehouse) in the next few months. And if all goes well, by the time I reach the end, I'll be able to dig into the third Ash book.

Where we are, where we're going...

This is all a little overwhelming.

So much of this process crawls. You spend so much time waiting for the next thing you have to do. To be in a place where everything's finally hitting, where pre-order pages are live and trade mags are confirming they'll review it and people are telling you they can't wait to read it—it's incredible.

Right now my whole life is marketing. Thinking of new ways to promote myself and the book. I finished and submitted some short stories, so I'll have stuff in circulation leading up to the release. I stumbled across a half-insane half-brilliant idea with a fellow writing buddy under the Polis banner, for a way we can co-promote each other (more on that soon, I think). I've got an idea for a book trailer, and I'm reaching out to people who might want to review the book, outlets maybe we didn't initially think of, but might be responsive. I'm coming up with some non-fiction articles to pitch to a couple of outlets, that are tangentially related to New Yorked.

Because as of today, there are 83 days left until this thing hits.

Great stuff as usual Rob, can't wait to have a read and things are going to plan. Would love to be involded and have my hand up to post the book on but I'm not in the states :(

Been following these articles. Would be cool to read ahead of release.

Can't wait to read this. Great chain-reading idea too. I'd be very happy to be included.

Awesome idea, even if it is stolen. I'm game.

Hey, I'm in. Get that shit out to the west coast! I'll review it for Pantheon Magazine.

Tzara from Everywhere, but originally Jersey is reading The Rum Diary and The Corrections March 17, 2015 - 11:31am

Hand is up. Would love to be a part of this and will happily follow through with all five criteria!

Hey Rob, that book lending/first page signing idea is really cool. I can't be part of it, but it's awesome :)

It's a fantastic book, peoples. Seriously, you won't be disappointed.

Such a fun idea. Put me on the list, please. And hopefully I'll be able to make the release party as well.

Love doing this type of thing. I'd love to be part of it. I agree to all of the above!