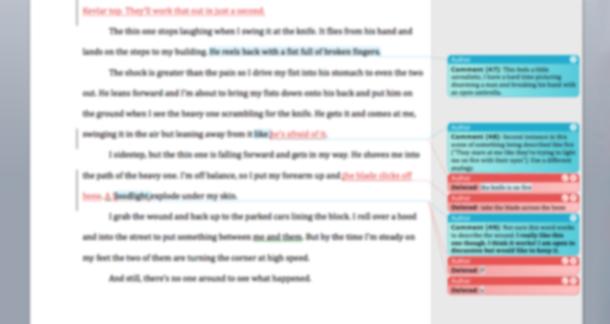 Polis Books will release my debut novel, New Yorked, in June 2015, and has contracted me for a follow-up, City of Rose. This is a monthly column about taking a book over the finish line.

Before I got my agent, I must have re-written New Yorked a dozen times. At least. Two of those were nearly ground-up rewrites.

I even gave it a pass while it was on sub. After two or three rounds of submissions, I asked my agent if we could hit the pause button—I had just taken a weekend-long Dangerous Writing course with Tom Spanbauer and wanted to apply what I learned. It wasn't any major surgery, but still, it was another opportunity to read through it.

There are entire subplots and characters that were taken out, added back, and removed again. The first draft barely resembles the book that it is now.

But there's been one scene that's been there since the beginning. Ash McKenna on the R train, riding through the Cortland Street station, which was destroyed on 9/11, and took a shamefully long time to rebuild. It's a small scene, but I wanted to take a shot at all the mayors and the governors and businessmen who dragged their feet on the redevelopment of Ground Zero.

I've got that raw, terrified feeling that people are going to read this thing soon. They're going to see the part of me that I put on the page, which is intimate and scary.

And it's just now, right at the finish line, that I realized Ash is riding the train in the wrong direction.

I just got finished with my final two passes on the book (one to address my editor's questions, another to be double-sure they all work). After this, the story is set in stone, save the proofreading.

It's an odd feeling.

On one hand, I'm nervous—what if I get the final book and I don't like how something turned out? What if I made another mistake, similar to the R train goofup? I figure that's inevitable. Nothing's ever done, we just get it to the point where we can live with it, and let it go live another life. But still, I'm nervous.

Worse than that, I've got that raw, terrified feeling that people are going to read this thing soon. They're going to see the part of me that I put on the page, which is intimate and scary.

It's a better book for his input, for sure. I think a lot of writers live in fear of getting the kind of edit that makes them compromise their vision. Changing first person to third, present tense to past, losing a major plot thread or storytelling device. There are sections of New Yorked where the narrator falls into second person, talking to a dead girl. Stuff like that is important to me.

Granted, I didn't take all of Jason's suggestions. But that's not uncommon. As an editor myself, I've had authors come back to me on a suggestion and say that it doesn't work, or they don't want to do it that way. The mark of a good editor is someone who leaves things open to discussion, and doesn't just hand things down by fiat.

Editing is like a dance. With a bad partner, you're stumbling all over each other. A good partner, and you can do something special.

And now this book is done. It's a quiet but encouraging moment of victory.

There's this poem by Jane Hirshfield titled "Changing Everything" about a person walking in the woods and picking up a stick, and moving it to the other side of the path, and that person says:

There, I said to myself,
that's done now.

It's done. I moved my stick.

Now, with a complete edit, I can start hammering away at blurbs. I sent the file to FedEx, had them print and spiral-bind a few copies. One of them went to Jenny Milchman. We met at a Noir at the Bar reading, where she chased me down after I read and told me how much she loved my story (which was published by Needle here). Then she read the opening of her novel, Cover of Snow, and I loved it so much that I bought the book and finished it in two days.

When I sent it to her for a blurb, I was worried—what if it's too dark? What if she doesn't like it? Shortly after I sent her the book, she sent me this:

One part Dennis Lehane, one part Lee Child, and one part pure Rob Hart, New Yorked is a dark, gritty love story to its eponymous city, and to one lost girl, which blends both mystery and romance while turning the two genres into something altogether new.

And shortly afterward, I got this gem from the fabulous Suzy Vitello, a good friend of LitReactor:

In Rob Hart’s urban picaresque, New York is a verb, and the chase is on. You won’t be able to turn the pages fast enough. Add an epic love story to the mix and an insider’s cunning wit, and you’ll be panting breathlessly, waiting for whatever Hart cooks up next.

So that raw, terrified feeling is getting easier to manage. Because of stuff like this. Writers whom I admire a great deal, getting on board with this thing. You have to win a lot of people over in the process of publishing a book—an agent, then a publisher, then your readers. And it's funny—it's very easy to succumb to feelings of inadequacy, even after you've won people over.

Every little bit helps. And these blurbs help a whole lot.

At some point soon I'm going to do a column on blurbs—the whole messy process of it—but for now, I had to at least share these. How could I not?

Having finished the final-pass edit on New Yorked, it was right back into City of Rose. I had finished it in a marathon writing session, and it's going to take a lot of work to complete. Digging back into the draft, I'm feeling pretty good about where it is. Though the first couple of chapters got more work, so they're a little more set.

It's due in February, and I was being ambitious, saying I'd have it done by the end of the year. Except I was invited to write a story for an anthology (which has already been sold), and it's due a little sooner than I thought.

And then a friend sent me an idea for a story that he meant as a joke and I love it so much that I want to write it.

And then I thought of a column I wanted to write about Tom Hanks getting a book deal (the theme of which is: shut the fuck up and worry about your own writing), so I did that and I'm shopping it around.

And I got invited to be the new guest host of the Books & Booze podcast.

And Bouchercon is next week. It's the year's big crime and mystery convention—I will bring my laptop and my running shoes with dreams of doing some editing and putting in some gym time. Truth is I'll probably just run around Long Beach drinking whiskey and looking for sober people to drive me to In-N-Out Burger.

But hey, we all have to have goals.

And it's good to be busy. But it's time to buckle down and get some work done. I'm going to take December off on this, and come back strong in January.

In the mean time, got questions about working with copyedits? Ask away. I'm happy to dish.

Did any of the edits you got on New Yorked influence how you're approaching City of Rose? Subplots, tone, how a character might react to a situ, stuff like that.

Class Director
Rob from New York City is reading at a fast enough pace it would be cumbersome to update this November 6, 2014 - 9:21am

There were one or two small bits that I took out of this book so I could use them in the second. But in a general sense, no--Jason's edits were more focused on clarity and tone.

It was hugely helpful to go through this again and then dive into edits on the second book, though. Made me feel like I got the rhythm of the voice back.

Edits on the second book are going to be way more interesting, I think--the first got worked over for years, and the second is being turned around in a couple of months. Curious to see how that changes the dynamic.

Glad to see you making progress and looking forwarded to your article on blurbs. I don't know many published authors traditional, indie, or otherwise. I have acquaintances here on Litreactor, guys like you who I peak in on through the articles and forums, but that's about it. I wonder how someone without connections secures blurbs. Does it have to be from a published author or a known critic/publication to carry any weight? How does one secure a useful blurb if they hardly have time to network to begin with? Would be cool to see you speak to that a bit in your article.

Anyways, keep on keepin' on, buddy.

Class Director
Rob from New York City is reading at a fast enough pace it would be cumbersome to update this November 11, 2014 - 9:32pm

Thanks for the kind words--and I'm definitely going to talk about that stuff in the column about blurbs.

Having connections has made it easier, for sure. Suzy is a teacher here and we've hung out a couple of times and I love her work. But Jenny is someone I met at a reading, and we hit it off. So part of it is just cultivating relationships and putting yourself out there.

This is helpful, though--gives me some stuff to think about as I look forward to writing about it, so thanks for that.

Dwayne from Cincinnati, Ohio (suburbs) is reading books that rotate to often to keep this updated November 14, 2014 - 1:24am

Get a random person you barely know who has nothing to do with writing to do a mildly positive as a blurb and act like it is manna from heaven.  That would be the best.