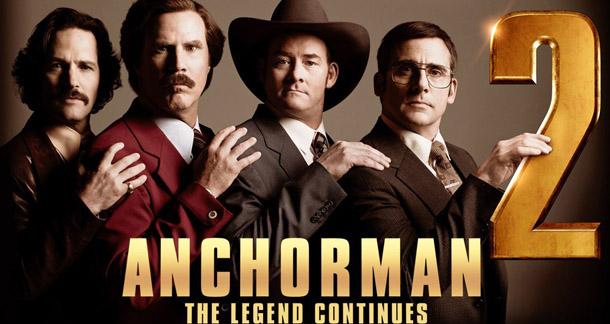 My debut novel, New Yorked, will be published by Exhibit A Books in January 2015. Until then, I'll be writing about the path to getting that book published...

Anchorman: The Legend of Ron Burgundy is one of the greatest achievements in the history of cinema. Full stop.

I remember the first time I saw it, with a few friends in a near-empty theater. I laughed so hard I pulled a muscle. There's something magical about that movie. The creators targeted it directly at the pleasure centers of my brain. I love that movie so much I put off seeing the sequel when it hit theaters.

I'm not one of those goons who thinks the experience of something can be ruined by a sub-par follow-up. I can still love Raiders of the Lost Ark on a deep and profound level even though Indiana Jones and the Kingdom of the Crystal Skull is garbage. But I also didn't feel the need to revisit an idea that stood so well on its own.

Still, I knew I'd give in eventually. And I did. A couple of weeks ago I watched Anchorman 2: The Legend Continues.

And it was okay. I don't regret watching it. There were certainly some funny bits. But it falls into the trap that sequels often do. Rehashing bits from the first installment. Playing things safe. Not breaking any new ground.

This is where my head is at right now. On sequels. Because in case you missed the news, Exhibit A has bought City of Rose, my proposed follow-up to New Yorked. Which is exciting! And also terrifying!

How to not suck

Now, this is a little different than Anchorman 2. It's a book, not a movie, and it's less a sequel and more a series. I've got five installments of this thing plotted out, to varying degrees of specificity. A private detective character—which this is—can play well in a series format.

It can also play boring. Case-of-the-week type stuff. Bad-guy-gets-away-then-gets-caught stuff. Stuff that I'm not interested in.

What I'm trying to do is look at these as a vehicle to work through my own shit. New Yorked is me struggling with being a grown-up. City of Rose is more about sexual politics. Specifically, how I view and interact with women, and how I see them viewed and interacted with. And I'm using a vegan strip club in Portland as the setting, because c'mon. Like there's a better place to set it.

I figure if I can invest myself in these things—use them as a roadmap for the person I've been growing into—maybe then I can stave off that feeling of rehashing the first book. Which is something I don't want to do. I want my protagonist, Ash McKenna, to grow and evolve. When he stops growing and evolving, that's when the series will have to end, I think.

Shows like Breaking Bad and Mad Men have it right. Don't keep making episodes because you're making money. Pick an end date. Tell the best story you can within the confines of that. That's what I want. Five books sounds like it could work.

What do you think are the biggest problems that plague sequels and series books?

What do you want to see in a sequel?

The other thing I'm doing right now is research. Reading stuff and watching stuff I think will push me in the right thematic direction. Because the second book is going to be a Western (or, Western-ish), I read Shane by Jack Schaefer. Which was great. It really embodied the aesthetic I'm aiming for—quiet stranger rolls through town to clean up a corrupt system and maybe drop the chip that's on his shoulder.

Though, maybe this was just me, but did anyone else get really heavy homosexual undertones in this book? Like, when Shane and the dad finished chopping the tree stump I was pretty convinced they were going to kiss. Which is okay! Just a little unexpected.

I'm also due to re-watch Road House, because Road House is a Western. Maybe with all this talk of sequels, I'll watch Road House 2: Last Call. It's supposed to be terrible, but maybe that's the point. I'm also hoping to mix in a little Kurosawa. I've never seen Yojimbo. Ronin arrives in a small town where competing crime lords vie for supremacy? Sounds about right.

Community Manager
helpfulsnowman from Colorado is reading But What If We're Wrong? by Chuck Klosterman May 27, 2014 - 1:08pm

My favorite westerns are The Sisters Brother by Patrick DeWitt (awesome, almost eerie that this came out around the same time as the Cohen Brothers' True Grit) and Far Bright Star by Robert Olmstead (great story, different POV as the main character's brother seems to be the unapologetic badass, and most of this badassery goes unseen).

If you're looking for that Western vibe, you can't go wrong with the American version of Yojimbo, Last Man Standing. I love that movie. Prohibition-era badass gunslinger rolls into a tiny Texan border-town to encounter a proxy war between two Chicago gangs, Italians and Irish, running booze in from Mexico. He decides to stick around, play them off of each other, and make some money in the process. Starring Bruce Willis at his most Willis-y and Christopher Walken, because that guy's in everything. Lots of excellent character actors, as well.