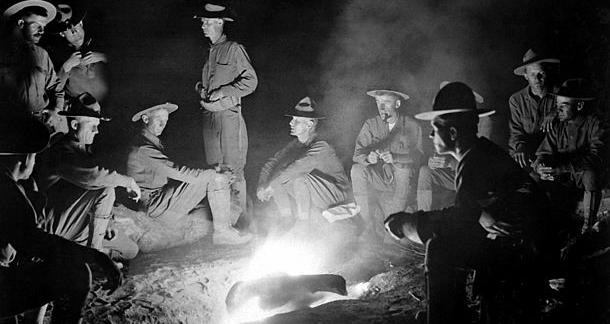 August and September are some of the best months of the year for camping. The bugs have died down, and the weather’s cooler and drier than in July. For thousands of years, camping has held an intimate connection with storytelling. Wherever humans gather around food and a fire, there are guaranteed to be tales of monsters and heroic deeds, of faraway lands and strange cultures.

When people today speak of storytelling, it’s usually assumed that there’s a kind of medium attached, whether by print or some other means. But for a good chunk of man’s history, direct speech was the most efficient way of telling a tale amongst a largely illiterate population. The printing press, after all, wasn’t invented until the 15th century, and news had to travel somehow. The results could be…colorful, with events taking on dramatic proportions as they passed down the grapevine. Although methods of communication have changed, oral storytelling has managed to survive in a world where speaking with a person across the globe takes only the push of a button.

Oral storytelling has managed to survive in a world where speaking with a person across the globe takes only the push of a button.

One of the differences between telling a story and simply reading one is the level of engagement on the part of the audience. While a reader has a script, stories told off the cuff are more interactive. The listeners have a greater stake in the outcome of something that they feel like they’re an active part of, which is why oral storytelling is a technique often employed with young children. Besides serving as a form of entertainment, folktales and campfire stories are also survival lessons. What happens when you wander too far from the group at night? The protagonist in Dave Eggers’ “Francis” found out the hard way. Such tales are always tinged with an element of caution as if to say, enjoy the forest, but don’t enjoy it too much. Nature is better observed in close proximity to a fire, one of man’s earliest defenses against nighttime predators. Because many campfire stories began as a warning, it's only to be expected that they tend towards somewhat sinister subjects.

This leads to the first point in our quest for the perfect spine-tingling campfire story: use the setting to your advantage. Camping out in the desert? Stories of skinwalkers will hit a lot closer to home than those of a haunted covered bridge. Choosing a tale that relates to the immediate environment is another way of bolstering the audience’s investment. That cheesy story about an escaped serial killer will sound a little less so if the abandoned home of his last victim is just visible through the trees, with one light winking on and off…That light might be from a car alarm going off, but no one has to know that.

Keep It Short and Sweet

It’s not easy to catch an audience’s attention, but it’s even harder to keep it. In “A Beginner’s Guide to Telling Stories,” the Society for Storytelling recommends visualizing a story before telling it. That doesn’t necessarily mean memorizing a monologue; just have the thread of the story in mind before you begin. It’s bad enough when an author strays and rambles on paper, but listening to a speaker digress for an extended period of time can be torturous. The Society also advises storytellers not to stick too rigidly to less consequential details, since improvisation is what drives the evolution of a tale over time. “The urban myth of the ‘Vanishing Hitchhiker’ is related to an old story often called the ‘Suffolk Miracle’, when the story traveled to India it became the ‘Pink Pashmina.’” It's the adaptability of urban legends and folktales that makes them so tenacious.

Everyone has had a professor or teacher who spoke in only one tone. By the time the lecture was halfway over, your paper would be a mass of angry scribbles, and the minute hand on the clock appeared to actually be moving backwards. Don’t be that teacher incarnate. Snarl, yelp, punctuate your sentences with random barking—just promise that you'll move your voice up and down at least some of the time.

Go Out With Style

Oral storytelling is part authorial skill, part performance art. One of the better plays I’ve ever seen was a version of The Woman in Black. At one point during the production, a woman dressed in a long veil walked behind the seats, moving so quietly that it took a while before anyone in the audience noticed her presence. Instead of jumping out for a cheap scare, the actress allowed her hand to just gently graze the back of an unsuspecting onlookers’ neck while they were focused on the stage. The results were phenomenal, although a few heart attacks were only narrowly avoided.

Rest is an opportunity not only to recharge the “vital batteries”, but also to get enough of new emotions. A picnic trip, a fishing trip or a bike tour to nearby attractions - outdoor activities will never lose their relevance. And a team of professionals - aircraft design engineer - took care that you go on the adventure path in full readiness and with the best equipment. We offer a service that has been appreciated by professional engineers, and avid campers, and ordinary outdoor enthusiasts.