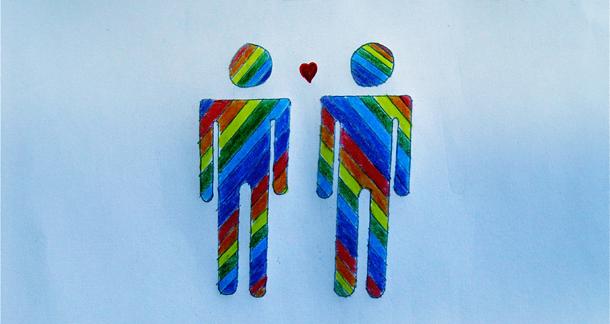 Image via Jenny is Such a Bookworm

Gone are the days when LGBTQ topics were taboo and the only available titles were poor, after-school special material. Today’s Young Adult canon features an immense wealth of rich characters that are not just struggling with their sexual identity, but are thriving as openly LGBTQ. It’s time to get to know four important openly gay Young Adult characters that are pleasantly diversifying YA lit. With authors like David Levithan, Bill Konisberg, Benjamin Alire Saenz, and Aaron Hartzler paving the way for excellent LGBTQ literature, there’s no time like the present for digging in. 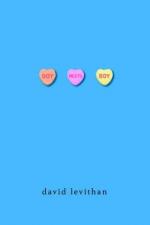 In this delightful romantic comedy, Levithan introduces us to Paul, a gay teen attending perhaps the most unusual and eclectic high school ever depicted. In Paul’s experience, the homecoming queen is the lovely Infinite Darlene, who used to be a guy named Daryl; the cheerleading squad enters pep rallies mounted on Harleys; and the gay-straight alliance is the place to be and be seen. Before you start moaning about how inconceivable this type of open and accepting environment might be, let me tell you why it’s an environment we need now.

We need Paul and his somewhat unconventional high school because that’s the social direction we are finally heading towards. States are passing bills that recognize legal gay marriage and sports superstars are coming out in a show of pride for who they really are. In Boy Meets Boy, Paul shows us what it’s like to thrive in an environment that doesn’t shame students for being themselves. Although the lead character and many of the supporting cast are gay, the story is focused on finding love and navigating tough friendships, not on the social struggle of kids who feel like they don’t belong. More than anything, Boy Meets Boy shows how easy it is to thrive in a world that isn’t hung up on a person’s sexuality and the labels that we use to define them. Paul is a wonderfully diverse and multi-faceted character you need to know now. 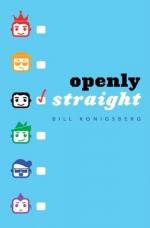 Speaking of labels, the next character you need to know now is the always smart and absolutely hysterical Rafe Goldberg. In Bill Konigsberg’s Openly Straight, Rafe comes from a super supportive Colorado community where he regularly speaks at high schools about being gay, and his mother is the president of PFLAG (Parents, Families, & Friends of Lesbians and Gays). That’s all fine and great, but Rafe is sick and tired of being the gay guy. He’s tired of the label that he feels defines his entire life. In order to finally escape the label of gay, he ships off to an all-boys boarding school in New England, where he isn’t so much going back into the closet as he is quietly omitting the real truth about his sexuality and starting over fresh. But what’s a boy to do when a well-meaning teacher pushes him to find his personal truth and Rafe starts to have feelings for a certain special classmate?

In this novel we see Rafe struggle with his own nature and learn along with him that being gay isn’t simply a label or a status, but an identity. In the all-important moment when Rafe realizes that he owes it not only to himself, but those around him to be honest and true, we are reminded that we are more than the way others perceive us. We need characters like Rafe to help us understand the way we put people in boxes and try to compartmentalize their behavior. Rafe is here to remind us that he’s not a walking stereotypical label; he’s a typical teenager who loves and feels and happens to be attracted to guys. In this wonderful coming-off-age novel, Rafe just tries to find a way to be himself, in spite of the labels. 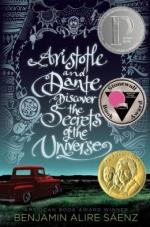 3. 'Aristotle and Dante Discover the Secrets of the Universe' by Benjamin Alire Saenz

Aristotle and Dante Discover the Secrets of the Universe is the story of two vastly different boys searching for meaning through a valuable friendship. Ari is obsessed with dark thoughts of his older brother in prison and tends towards the melancholy side. Dante is intrigued by poetry, art, and philosophy, and thinks deep thoughts about the world around him. When Ari and Dante meet for the first time they form an unbreakable bond and share everything together. As their friendship deepens they must each find their own truths and discover the power of true love.

What’s wonderful about this story is how seamlessly Saenz introduces the fact that Dante is gay. It’s not the central idea of the novel, nor is it ever a big deal to his friends and family. It isn’t until the two boys have been hanging out for a long time and have a very real friendship that Dante even brings up the idea that he might be attracted to Ari, and even then Ari just isn’t fazed by it. It takes an act of hate and violence against Dante and the gentle prodding of two very supportive parents for Ari to realize that the feelings he has for his best friend go beyond platonic friendship and have deepened into true love. We need these characters and this story to remind us once again that it’s not about being gay or straight, but about the feelings and the emotions behind real love. That's what matters. 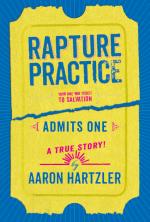 Although we have so far discussed only fictional characters, I would be remiss if I didn’t mention a real life character that is diversifying Young Adult through memoir. In Rapture Practice, Aaron Hartzler tells the story of his life growing up gay in an evangelical Christian family. From the time he is very young, he has been taught to believe that Jesus will return to Earth in what is known as the Rapture. Not only does he believe that the Rapture is coming, he also believes it could be at any moment in his young life. As he grows older, Aaron begins to question the absolute rules and beliefs that have governed his entire life. He begins listening to non-secular music, hiding the cassette tapes underneath his car seat, and sneaking off to the movies with his friends, when movies are clearly not allowed. After his parents move him to a very strict Christian school, Aaron makes friends with Bradley, who comes from a much less religious and strict family background. His friendship with a boy whose family is not religious, yet is entirely loving and honest, shakes up Aaron’s understanding of faith even more.

In this well-written memoir, Hartzler’s portrayal of his strict religious upbringing and its impact on his knowledge of self is unflinching and honest. While the actions of Aaron’s parents are pretty extreme in the treatment of religion and their way of raising a teenage boy, Hartzler does an excellent job of letting their true intention (clear love for their son) shine through. Hartzler is not afraid to show his own foibles, and readers will find themselves cringing right along with him with every misstep and apology in the book. Even readers who are not gay men growing up in an evangelical Christian family will relate to the intense emotions and dramas in the book. It’s easy to like Aaron Hartzler and to root for him along the way.

This excellent young adult memoir would be well received not only by young people struggling with their sexuality, but also by young adults who have questioned what they have been told to be true. Rapture Practice is a great story of a boy who questions everything and comes out on the other side well-rounded and self-aware. Hartzler is a character that reminds us that we can rise above our upbringing and thrive being who we really are.

These four books are only a few of the wonderful LGBTQ Young Adult titles available today. If you’re looking for more options and a wider variety of LGBTQ characters, here are a few recommendations:

We’ve discussed only openly gay characters in this piece, leaving a wide range of other LGBTQ characters to be discovered, and I encourage you to explore titles that expand on this experience.

Hey, thanks! I think I will give Rapture Practice a try.

Great article! I have to read these 4 books for sure. Two Boys Kissing by David Levithan is one of the best books I've read this past year so I know I will love Boy Meets Boy. :-)

Thanks for this post but you and LitReactor might want to think about a list that has a few more current titles on it.  Boy Meets Boy and Luna are 10 years old, Empress of the World is 13 years old, and Hero is 7 years old.  There's tons of newer titles that are great fits for this, including newer titles from David Levithan and Julie Anne Peters. It'd also be great to see some more of the LBTQ part of the spectrum.

You did include some wonderful books, but I would like to point out that the books you featured and wrote about in detail, the ones that are going to get the most notice, are all about cisgender males.  Saenz's book does involve characters of color, so that is nice, but queer/rainbow books cover a lot of characters beyond the cisgender male.  What about characters that identity as cisgender females, trans*, or genderqueer?  What about characters that are asexual, pansexual, bisexual, queer rather than just gay/homosexual?  You bring some great books to our attention, but next time I would suggest thinking about the story that the list tells about both the genre and the characters getting depicted, and whether or not that's representative of the genre or the thing you are listing (such as something involving queer/rainbow identity).