Open to Inspiration: How Your Own Family History Can Feed Your Fiction 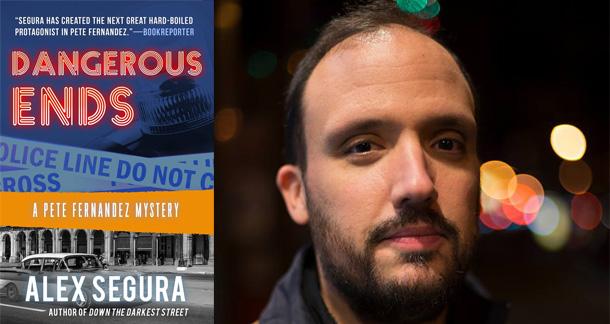 I didn’t expect to find the hook to my next book by the veggie platter. But that’s what happened, and it saved my novel.

Let me back up. This was a couple years ago, at my mother-in-law’s birthday party in Brooklyn. We’d all gathered to celebrate the day, eat some food and relax. I wasn’t even thinking about my third Pete Fernandez Miami mystery novel, Dangerous Ends. Hell, I was actively trying not to think about it. That was mostly because I was hitting a big wall with the story and the clock was tick-tick-ticking.

See, when I wrote my first novel in the series, Silent City, I was writing for me. No deadline, no agent, no publisher. I’d started it on a whim and ended it on its own terms. I had all the time in the world to tinker and mull over what the book would be. The second one, Down the Darkest Street, was born under similar circumstances. By the time I’d published the first, I had number 2 at the ready. I was locked and loaded. Sure, both went through revisions and rewrites and changes, but the bulk of each book was already on the page. I was just chipping away at the clay, but the source material was there, on the table.

Dangerous Ends was different, I was under contract to Polis Books and, while the general idea behind the book had been approved, they still needed to see a complete first draft by X date. There was actual pressure on the writing process now.

The specter of Castro and his communist regime hovered over my early days and added to the mystery of “Over There”—this different, not-so-distant land my family came from that I may never see. I wanted to learn more about it.

That said, I’ve always been deadline-oriented. I come from a journalism and PR background, where you have to write fast, on deadline and well. But at this point, as I grazed the snacks at the party, I only had part of a novel. I had the crime, some character arcs and the conflict, but I wanted more. I wanted this book to feel like a step forward. Not just for the story, but for me as a writer and for the series as a whole. I wanted readers to feel like each book took them in unexpected and fulfilling directions. No easy feat.

Silent City had served as the origin story for my detective, Pete Fernandez, a former journalist struggling with the bottle who gradually picks up experience and ability as a detective, incurring some bumps and bruises on the way. Down the Darkest Street took our shambling hero and dragged him through the sewer, showing him that things could—and would—get worse. By the end of that book, he’s defeated, bloodied and utterly alone—but slightly hopeful. I wanted the next book to be bigger in scope and feel more epic. I wanted to play with Pete’s own history and go deeper into his relationship with his hometown of Miami, where the series is set.

Now, here’s some background: I do a lot of “organic” research between books. It usually involves reading a lot of nonfiction or true crime novels to get my head in the right space for the kind of book I want to write. I call it organic because otherwise it’d seem much more strategic than it is. For example—Down the Darkest Street was my take on the serial killer genre. I wanted to do it a bit differently, and the big twist in the book pulls the curtain back on what that difference is, so I won’t spoil it here. But to get to that first blank page of the novel, I found myself reading books like Philip Carlo’s The Night Stalker, Anne Rule’s The Stranger Beside Me and Robert Keppel’s The Riverman. It wasn’t really by design, and it happened over years. I just got on a serial killer kick. By the time I was reading the last one, I’d started to get into the home stretch on my first book, so I needed to start thinking about the next. The two ideas blended together and I got rolling on Down the Darkest Street.

The same thing was happening with Dangerous Ends—I’d become obsessed with the case of Jeffrey MacDonald, the former green beret (and doctor) serving a life sentence for the bloody murder of his wife and two daughters in 1970. The case had it all—drug-fueled hippie murder theories, a potentially psychopathic suspect with shades of Manson, a mysterious eyewitness, and the backdrop of America in turmoil that was the early 70s. I wanted Pete and his partner, Kathy Bentley, to get ensnared in a case that they were unsure of, and have it slowly peel away to reveal something unexpected that also tied in to the history of Miami.

It was that last part that had me hung up. I had a great story, about a disgraced ex-cop hiring Pete to prove his innocence, but, like I said, I wanted more.

“How’s the book going?” my aunt asked as she reached for a carrot stick.

I told her: Okay, good but not great, only slightly freaking out. OhwaitI’mactuallyfreakingout.

She nodded politely and we started talking about books in general. While researching the MacDonald case (there are three or four essential books and they each take very different stances on the crime and its aftermath: Fatal Vision by Joe McGinniss, A Wilderness of Error by Errol Morris and The Journalist and the Murderer by Janet Malcolm), I was also reading a lot about Cuba. I grew up in Miami but my parents were born in Cuba and came to the US at a very young age. The specter of Castro and his communist regime hovered over my early days and added to the mystery of “Over There”—this different, not-so-distant land my family came from that I may never see. I wanted to learn more about it. In my head, it was unrelated to writing. It was about my own personal identity and figuring out the story of Where We Come From.

“Well, why don’t you write about that?”

I just kind of looked at her, a bit stunned at how obvious the idea was, but also excited at the possibilities. As my brain whirred, she started telling me a story—about how her father (my paternal grandfather), had worked in Batista’s government, and had actually been confronted by Castro’s men and asked to sign off on some unspeakable acts. It was something out of... a detective novel. The pieces started to fit together, and the novel I was working on became much bigger—not just in page count, but in scope and ambition. The fairly linear case now shunted between timelines and locations, delving deeper into not only the history of Miami, but its conflicted and long relationship with Cuba, while also taking readers back through Pete’s own family tree, and showing the legacy he carries with him as we move forward in the story. It added depth to the pieces already on the board and made what was already there stronger. The missing piece that made my book go from “the next book” to “the book I have to write now” had been staring back at me every day. It was my own family history.

What’s the lesson here? Well, it’s not the easiest needle to thread—but keep yourself open. Keep your senses on and absorb what’s around you and, no matter how tiring the cliche is to hear, embrace who you are and what you know. Bask in your experiences and knowledge, because those things may be the spark you need to go from stuck-in-neutral to typing “The End.”

Alex Segura is an acclaimed, award-winning writer of novels, comic books, short stories, and podcasts. He is the author of Star Wars Poe Dameron: Free Fall, the Pete Fernandez Mystery series (including the Anthony Award-nominated crime novels Dangerous Ends, Blackout. and Miami Midnight), and the upcoming Secret Identity (Flatiron Books). His short story “Red Zone” won the 2020 Anthony Award for Best Short Story, and his border noir short story, “90 Miles” will be included in THE BEST AMERICAN MYSTERY AND SUSPENSE STORIES of 2020. He has also written a number of comic books, most notably the superhero noir The Black Ghost, the YA music series The Archies, and the “Archie Meets” collection of crossovers, featuring real-life cameos from the Ramones, B-52s, and more. He is also the co-creator/co-writer of the Lethal Lit crime/YA podcast from iHeart Radio, which was named one of the best podcasts of 2018 by The New York Times. By day he is the Senior Vice President of Sales and Marketing at Oni Press, with previous stints at Archie Comics and DC Comics. A Miami native, he lives in New York with his wife and children.

Open to Inspiration: How Your Own Family History Can Feed Your Fiction

Nathaniel Mortlock from Bristol, UK is reading Chuck Palahniuk, HAUNTED May 3, 2017 - 7:25am

If I wrote a book about my family history I would have to call it "My Life With the Thrill Kill Cult". OK someone's 'had' that title but you get the gist.. Hopefully, one day, my parents will be locked away in prison.

Does this history inform my work? You bet it does..