One Year of Podcasting About Stephen King: A Retrospective 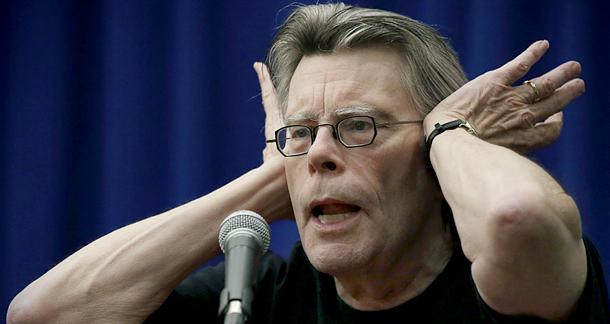 In March 2017 I launched the first episode of Castle Rock Radio, a Stephen King-themed podcast hosted by myself and my significant other, Lori Michelle. As of this week, we have released thirty-six episodes and attracted just over 12,500 total downloads. I don’t view this as a statistic to brag about, but it does confirm that someone, somewhere, is indeed listening to our show, and that will never cease blowing my mind. Sometimes fans even send us random Stephen King merchandise. Just take a look at this sweet-ass pin we received a couple weeks ago: 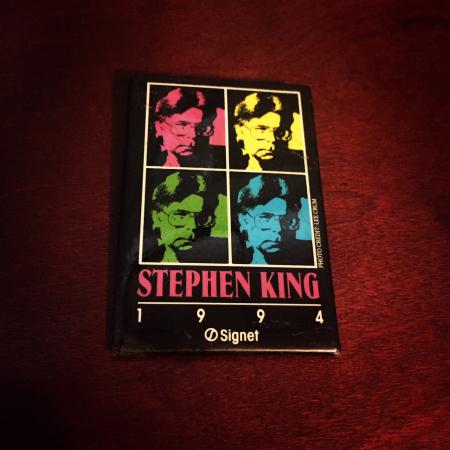 To say that I host a podcast for the cool gifts would be 100% accurate. Please continue sending us odd Stephen King items you no longer want. I will gladly position them around our house and force all solicitors to compliment them.

But to be honest, I started Castle Rock Radio for a variety of reasons, the biggest of all being the idea of hosting my own show scared the shit out of me. All my life, social interactions have plagued me with anxiety. Due to a stupid speech impediment that surgery and therapy only barely adjusted as a kid, talking to other people has never gone over too smoothly. In reality, it’s never as bad as I imagine it is in my head, but in the moment it’s often difficult to keep that in mind. This, of course, led to avoiding anything that involved having to actually speak, such as public readings, podcast appearances, and convention panels. My first public reading happened at the ass-end of 2015, at a neat little joint called The Wild Detectives in Dallas, TX. A number of talented folks joined me, including Joe Lansdale, who is easily my favorite author of all time, dead or alive. I ended up getting very drunk and trying to steal his wallet. It went pretty well.

I employed the “being very drunk” approach at the half dozen or so podcast and panel appearances that followed, until about a year ago when I decided if I was going to do this shit, I needed to do it sober.

The desire to host my own podcast started picking up steam as I received more and more invites to guest on other shows. After the initial anxiety attack before each appearance, I discovered just how much I actually enjoyed the experience, and looked forward to the next one. Eventually, a solid idea for my own show clicked after spending an entire month reading every single short story collection in Stephen King’s bibliography for a massive LitReactor article. It was a dumb challenge, reading them all in such a short amount of time, and I barely made it out alive. During this readathon, I often described the most ridiculous stories to Lori while struggling not to pass out from laughter, such as King's infamous “hitman is hired to whack a cat” tale (“The Cat From Hell”) or his wonderful story about a haunted laundry press that goes on a killing spree (“The Mangler”). One (naked) thing led to another, and we created Castle Rock Radio.

The way I usually describe the premise to potential listeners and guests goes like this:

Imagine you’re at some bar, and this drunk doofus starts talking about The Shining. He’s never seen the movie or read the book, but for whatever reason he wants to know everything about it. So, not exactly sober but not exactly blackout drunk, you try your best to explain the plot from beginning to end. The drunk doofus is the audience.

It’s not exactly a book review podcast. We don’t treat it serious enough to provide sincere analysis. We also don’t get drunk before recording, as the above description teases (in fact, neither Lori nor I even drink alcohol these days). Castle Rock Radio is a comedy show first and foremost. We don’t really give a shit about offering heavy criticism. We only care about entertaining our listeners.

The podcast has helped with my anxiety issues. They’re still present, of course, but nowhere near as extreme as they once were. Since we often utilize special guests on our show, I’ve forced myself to become more comfortable talking to others. Hell, after a year of doing Castle Rock Radio, I even found the courage to start a second podcast focused exclusively on interviews: The Taco Summit, with Andrew Hilbert joining me to share  hosting duties. I definitely have ideas for other shows in the future, but those will have to wait for now. Podcasting has turned into this weird addiction that I can’t quite shake. If anything, it’s getting worse.

If you are afraid of sharks, I would not recommend trying to fight one. You will lose.

Sometimes facing your fears head-on is definitely the way to go, although this technique should not be used in every scenario. For instance, if you are afraid of sharks, I would not recommend trying to fight one. You will lose. You will cease to live. Your body will be consumed and digested into shark feces, which will then consequently be consumed by much smaller fish, repeating the cycle until the end of time. Do not fight sharks.

But in my case, it was totally viable. I had to fight exactly zero sharks. All I did was speak into a microphone, then listen to what we recorded over and over for hours at a time, numbing myself to the sound of my own voice during the editing process.

Hey, speaking of the editing process…

Every day of my life is spent operating our small press, Perpetual Motion Machine, and the accompanying horror magazine, Dark Moon Digest. Some days I even manage to squeeze a couple thousand words into the current novel and whatever nonfiction deadline is the nearest. I am constantly staring at text, and sometimes just the thought of words is enough to make me sick. I did not realize how nice it is to occasionally take a break from reading until I started spending time editing Castle Rock Radio in GarageBand. Often in publishing, the work never feels like a singular task that can be finished and erased from the to-do pile. Nothing ever...ends. But with these podcasts, after the recording is done and I’ve gone through the editing process and clicked UPLOAD...that’s it. The episode is finished.

And, since I don’t stress about the podcast providing any kind of monetary income, there’s no extra pressure to overly promote it. A real catharsis comes with the ability to just release something and be done with it, to wash your hands of a creation and move on to the next thing. It’s difficult to reach that level of satisfaction with writing or publishing. Podcasting, however, is exactly the kind of side-project my anxiety-ridden ass needed. I'm glad I embraced it and I don't plan on stopping anytime soon.

Castle Rock Radio is available on iTunes, Stitcher, Google Play, Spotify, YouTube, and wherever else you typically listen to podcasts.