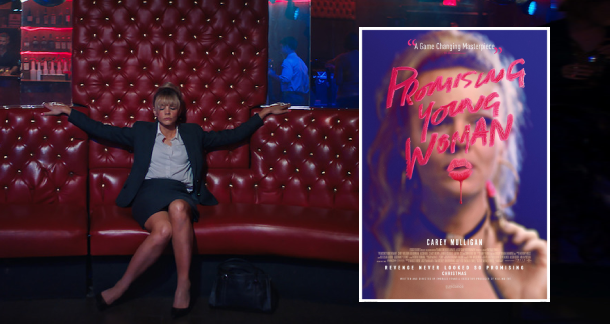 There are the bright gaudy colors. Costumes. Pop music, especially, though not limited to "Toxic" by Britney Spears. And to say that the experience of watching Promising Young Woman is similar to that of getting on a twisty, amusement park ride is not a stretch.

Nor is it an injustice to say that Promising Young Woman utilizes all of these tools to hook the viewer into watching a fantastical story of revenge. It is a revenge fantasy and we do get hooked as we watch it. It's just that Promising Young Woman is also more than that, because in its deconstruction of what we know about revenge fantasies it urgently seeks to say something about the current state of the world.

To be clear, and yes, spoilers are forthcoming, Cassandra, Carey Mulligan's protagonist, is bent on revenge. The question is what we as viewers are to make of her actions as they unspool before us?

The revenge fantasy is a narrative most of us become familiar with as soon as we begin to consume culture. It's the hook for an entire spate of Liam Neeson movies this last decade, and has found a place in pop culture spanning from Death Wish to True Grit to more recent work such as the television show Revenge, which was about just that, an extended, at times violent rumination on how one gains revenge on those who've wronged them.

...the whole project that is Promising Young Woman demands actions that call for nothing less than cultural transformation.

The key to these stories is that someone (or someone they love) is violated at the beginning of the story and in response the protagonist spends the rest of the story avenging those wrongs. What tends to be ignored is what these revenge fantasies say about the culture they emerge from and what they say about how society understands trauma and post-traumatic stress disorder.

These stories also remind us that every generation gets the horror movies appropriate for their time. It's why a movie such as I Spit on Your Grave gets remade again and again (as have Death Wish and True Grit for that matter): these stories mold themselves to contemporary issues and help us make sense of whatever we least understand, but must learn to understand if we are to evolve and survive.

While pandemic movies are yet to come (or come again anyway), we’re currently immersed in untangling the horrors that accompany the #MeToo movement. As higher profile stories such as those around Harvey Weinstein and Bill Cosby emerge (and remerge), we are forced to face the endemic male toxicity and violence that saturate the world we live in. We also have to ask ourselves why so many men feel they have the right to take what they want and why so many people look the other way as they do.

Which brings us back to Promising Young Woman, which is also then a horror story (though at moments, a rom-com as well). Which is also to say that there’s a lot going on in this movie, though the set-up itself is simple: Cassandra goes to bars, pretends to be too drunk to know better, and men who otherwise think of themselves as nice guys find ways to justify taking advantage of her inebriated state for their own sexual desires and compulsions.

Once in their homes however, Cassandra confronts them and their bullshit, and forces a reckoning about their behavior, as she picks apart their inane self-justifications for the decisions that have led to this point, Cassandra, sober, and in their face, seeking answers.

This element of the movie alone speaks to casual misogyny and the ease with which men justify both their micro aggressions and the actions they want to believe don't constitute assault. It also speaks however to the countless examples of sexual violence that occur, which don't involve celebrities, or bigger than life figures, and receive little to no attention or press coverage at all.

And so, on one level Promising Your Woman presents a story about how men live and the world women are forced to negotiate because of their choices, while presenting a conversation about the nature of sexual violence and just how commonplace it is.

This also speaks however to the more significant story arc of Promising Young Woman: At one point prior to the onset of the movie, Cassandra attended medical school with her best friend, the friend was sexually assaulted by a fellow student as their classmates, both male and female, watched, egged them on and laughed about it. The Dean blithely dismissed the assault. And a lawyer who represented the classmate, ignored the realities of the story and made it all go away.

This then is also a story that speaks to the endlessly complicit behavior by men, women, and the culture in which we live, that allows us to look the other way and enable this behavior.

All of which reflects Cassandra's efforts to cope, though not necessarily address, the trauma of her friend’s rape and apparent suicide, which culminates in the series of events that lead to movie’s unpredictable, and borderline surreal, finale.

I could spoil that finale for you, but what would that accomplish?

Instead, I'll say that the end of the movie and the whole project that is Promising Young Woman demands actions that call for nothing less than cultural transformation. What might these actions look like and what role can we play (because we all play a role):

The need for men to pay attention to male toxicity and the behaviors that accompany it, and to listen to what has become a national conversation (as opposed to telling their side of the story and their interpretations of the problem).

A more nuanced discussion of trauma, how we process it, recognize it and treat it, and how we support those who suffer from it.

A call for artists to tell more stories from all sides of this dialogue, which will help further illuminate the issues, their nuances, and add substance to stories that can otherwise feel abstract.

Ultimately, most of us are drawn to revenge stories because they speak to our fear, anger and confusion, and provide us with an outlet where we can unload these feelings even as we fail to sort through what they mean to us. It is when these stories speak to healing, though, that we may find an actual way forward, and this is why Promising Young Woman speaks to so many of us. As fantastical as it is, it offers solace and hope, and what could feel more necessary or contemporary than that?

Get Promising Young Woman at Amazon