Off The Grid Reads: 'The Weird' Edited By Ann & Jeff VanderMeer 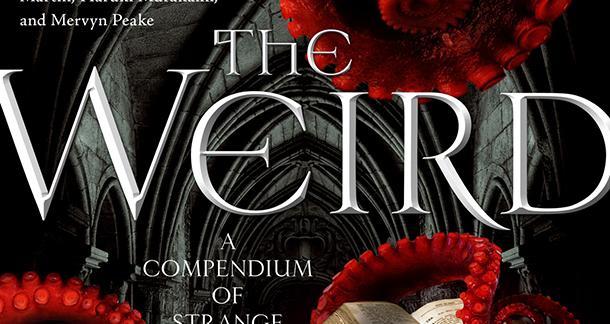 So you've finally had it. You're sick of the grind: the job, email, Facebook, Twitter, text messages, television constantly trying to sell you shit you don't need. When you were first starting out, you never pictured your life turning out the way it has. You always thought you'd live close to the land, maybe farm and hunt your food, build your house with your own hands, fall in love with a woman who had the same ideals. But nope, nothing of the sort has happened. After college you networked hard with your dorm-mate from Juarez and started a highly profitable "import/export" business. You married a gold-digging whore with a great rack, bleach blonde hair and zero activity going on between the ears. The two of you popped out three of the dumbest, most spoiled brats North America has ever seen, and for a few years, well, you forgot about living off the land. At least until your former roommate and business partner was found in a San Antonio landfill minus his head, and suddenly your dreams of living in the wild were reborn.

You ditch the gold digger, the brats, and your McMansion in Dallas. You hire a guy who can hide you indefinitely and provide you with the simple life you've always wanted for a mere fifty-thousand-dollars a month, which is a small price to pay considering the feeling of security and well-being your new middle of nowhere Montana environs is providing you. The only thing you miss is your library. You spent a lifetime building the damn thing up, and now it's probably nothing more than a pile of ash. What makes you even sadder is your little middle of nowhere cabin contains zero books. Plenty of shitty DVD's, but no reading material. For an extra five grand, your savior agrees to bring you a book a month. You make up a short list, provide him with your pick, a massive tome you've wanted to crack open, but haven't found the time to read, and your second pick is…

When I decided to write this column, I promised myself I wouldn’t attempt to define what weird fiction is, and I’m still keeping that promise to myself, but I will give you some examples:

The Southern Reach Trilogy by Jeff VanderMeer (and pretty much everything else VanderMeer has written), that’s weird fiction.

American Gods By Neil Gaiman (like VanderMeer, pretty much everything by Gaiman), that’s weird fiction.

The MaddAddam Trilogy By Margaret Atwood (okay, I might be stretching a little bit on that one, but come on, you’ve got to admit the children of Crake are pretty goddamn weird), that’s weird fiction.

H.P. Lovecraft, a good hunk of Stephen Graham Jones' output, another good chunk of Joe Lansdale’s material, Lisa Tuttle, Haruki Murakami, Thomas Ligotti (if there’s a modern father of weird fiction, it’s Ligotti), Poppy Z. Brite, Ray Bradbury, Kelly Link, Chuck Wendig, Julia Elliot, Victor LaValle … The list of writers who could be hammered into this broad genre goes on and on. But I think weird fiction is best summed up by the legendary Michael Moorcock in his introduction to The Weird:

… We’re clearly comfortable with a term covering pretty much anything from absurdism to horror, even occasionally social realism … There are no established rules for the weird tale, which is at least part of the attraction if the story an author wants to tell can’t readily be told in an established form. Although it might often contain a supernatural element, or a suggested supernatural element, it does not have to do so.

The other hallmark of weird fiction, I believe, is of how difficult it is to provide a pure definition for it. Because it’s not horror, it’s not speculative fiction. It’s not literary fiction … It’s just weird.

The day after Christmas back in 2013, I had my obligatory $50 Barnes & Noble gift card burning a hole in my pocket, and I decided that the two books I would pick up would be Wonderbook edited By Jeff VanderMeer (by the way, folks, if you haven’t picked up Wonderbook yet, do so. It is easily the most entertaining style guide I’ve ever read. Even if you don’t write weird or fantastic fiction, the essays included in the book—along with the pages and pages of lush illustrations—are absolutely essential to any writers collection) and The Weird edited by Ann & Jeff VanderMeer. I also vowed that the only book I would read for pure pleasure (This is, of course, a vow I broke) was The Weird. It took me a little over ten months to do it, but I dug my way through this beast. In fact, I largely created this column just so I could I review it.

'The Weird' is essential reading if you are a fan of horror/speculative/transgressive/dark fiction. Hell, if you’re a fan of great writing, this needs to be in your library.

Now before we get started, I’ll give you a few warnings. First off, there’s no real conventional way to review a work of this size—it clocks in at a massive 1,125 pages and contains 110 short stories. Yeah, this one is some seriously heavy lifting—so I picked a handful of stories that I think a lot of readers might skip over. But for those of you who need a nice encapsulated review in two sentences or less, here you go:

The Weird is essential reading if you are a fan of horror/speculative/transgressive/dark fiction. Hell, if you’re a fan of great writing, this needs to be in your library. Now that we have that out of the way, let’s move on to the stories.

"The Casting of Runes" by M.R. James

I think just about every fan of horror fiction and ghost stories have stumbled across M.R. James at one time or another, particularly "The Casting Of Runes". James is without question the father of the modern ghost story. He shredded the notion that haunted tales had to posses a gothic setting and instead set his stories in modern (at the time) times. James’ influence was vast and his voice can be heard in the stories of such writers as H.P. Lovecraft and Thomas Ligotti. Although "The Casting Of Ruins" is going to seem dated to some readers, but honestly it’s one of the best supernatural revenge stories I’ve ever run into, with each carefully crafted sentence virtually dripping with dread.

"The Book" by Margaret Irwin

Yeah, you know those gothic ghost story writers I wrote about a second ago, Margaret Irwin is one of those. Although she was primarily known for her historical novels, she penned more than a few gothic supernatural tales. Irwin was a favorite of my mother, and a writer she tried to push on me when she was trying to get me interested in reading more than just comic books. Admittedly, I found her a bit stale. But "The Book" stuck with me through the years and I was happy to see it included in The Weird. "The Book" basically breaks down to buttoned down psychopath meets demonic book, and demonic book and buttoned down psychopath fall in love. It’s a hell of a fun read.

You know, there’s a reason why Fritz Leiber is probably one of the most widely anthologized writers of the 20th century, and that’s because the man knows how to keep you entertained and turning pages. "Smoke Ghost" is another great little ghost story included in The Weird, but with one important difference. Instead of the ghost being the spirit of a tormented individual, the city in which "Smoke Ghost" takes place is the tormented soul. A very evocative and chilling story.

"The Howling Man" by Charles Beaumont

Beaumont is without question my favorite short story writer of all time. I’ve hung onto the mass market paperback of The Howling Man & Other Stories for nearly three decades and with good reason. Beaumont’s style as a writer is cinematically charged and extraordinarily vivid. Beaumont made his living as a screenwriter and penned some of the best episodes of the Twilight Zone, including his controversial adaptation of "The Howling Man". "The Howling Man" is the story of a young traveler making his way through Europe. The young man gets lost during a storm and ends up taking refuge in a monastery. Upon entering, he hears howling coming from somewhere in the building. He puts it out of his mind because of his exhaustion and goes to sleep. The next morning he hears the same howling and goes to track it down. He finds where the screaming is coming from: a cell in the basement of the monastery. The young man is convinced by the man in the cell that the monks are bugshit crazy and that he should let him out. The young man does, and needless to say, it’s a bad fucking move.

"The Genius of Assassins: Three Dreams Of Murder In The First Person" by Michael Cisco

I’m going to finish off with what I consider to be one of the strongest stories in this massive collection, and one that veers more towards social realism as opposed to having a supernatural bend. Admittedly, "The Genius of Assassins" was my first introduction to Cisco, and since originally reading this story, I’ve gone on to read Cisco’s debut, The Divinity Student, and The Traitor, and I’m bound and determined to write a Why The F*ck Aren’t You Reading column about Cisco sometime in 2015. To put it bluntly, this is one of the most uncomfortable stories I’ve encountered in a number of years. But trust me, this isn’t a bad thing. I like being uncomfortable, I like being challenged by what I’m reading, and I like it when a writer breaks from convention and surprises me. "The Genius of Assassins" is about psychopaths, but it is by no means your typical slasher porn. There were moments during the reading of "The Genius of Assassins" where I had to stop to catch my breath. If you’re a fan of American Psycho or Cows By Matthew Stokoe, you’ll love "The Genius of Assassins."

Three quarters of the way through this collection. So good...

I need to pick it up for reals again, read through the first 3-400 pages before I started to pick up other books, and then I just read a short story here and there. Great stuff though, such a beast.