Not There Yet: Diversity in Big Five Publishing 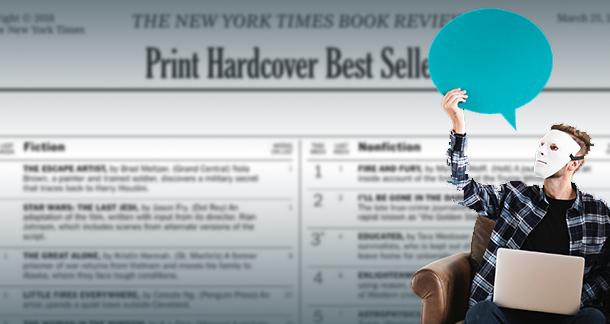 Nothing brings racists out on Twitter quite like asking for more diversity in publishing. Last week I tweeted:

The reactions were immediate and predictable. Anyone remotely familiar with who I am and what I do knows I hustle to get underrepresented voices heard and, as a reviewer and PANK Magazine’s book reviews editor, focus on books from indie presses, most of them written by women, LGBTQ folks, Native Americans, Appalachians, and people of color. However, here are some responses I received:

- The customers are the ones who buy the books.
- It’s obvious that professional jealousy is eating me alive.
- If I “organized my thoughts in a more coherent manner” I would increase my appeal in the marketplace.
- I should stop whining.
- I’m sour.
- Folks like Gabriel Garcia Marquez and Sandra Cisneros never complained about diversity, so I need to shut up and stop complaining.
- The only reason people of color aren’t getting published is because we’re not producing anything worth reading.

As someone who’s been dealing with assholes online for years, none of this bothered or surprised me. However, I had pitched this article a month before that tweet and thought the responses would make for a great opening. As you can see, bullshit and racism are alive and well. Unfortunately for those telling me to stay quiet, that’s something I’ve never done, and my platform is bigger than theirs. That’s one of the reasons I don’t get mad. Hah!

That diversity is necessary, that it would enrich our collective consciousness and our reading lives, is a given.

Diversity is still an issue in publishing, especially when it comes to Big Five publishing. The names in my tweet are just the tip of the iceberg. Want another example? Here are today’s NYT hardcover bestsellers: David Baldacci, Delia Owens, Sally Rooney, Martha Hall Kelly, Claudia Gray, Lisa Scottoline, Harlan Coben…you get the point. Not very diverse, is it? Now, let’s be honest. If you think there are no writers out there writing better narratives than the formulaic stuff that usually makes this list, then you don’t know shit about publishing. If you think readers are to blame because they buy the books, then you don’t understand how distribution and placement work, and let me tell you something: both of those favor the same writers you always see at the airport’s bookstore. Lastly, if you think no indie books can match or, in many cases, beat the shit out of any bestselling book in terms of quality, then I have a good idea of how many books from indie publishers you usually read.

That diversity is necessary, that it would enrich our collective consciousness and our reading lives, is a given. What I don’t understand is why people keep looking for excuses to keep that from happening. I think it has something to do with the same thing that makes folks scream when people of color complain about whitewashing in Hollywood: racists like the status quo and would do anything in their power to prevent diversity from getting a chance to show how great it can be. Well, fuck that. I’m here to shine one more light on this and invite you to do the same. Let’s be the Lego under the foot of publishers. Let’s be the voice of reason demanding equal opportunities. Let’s be the fist smashing against the yellow teeth of racists obsessed with keeping things the way they are.

Here’s a little exercise for you. Take your favorite genre. Don’t have one? Try horror. Or crime. Or YA. I don’t care. Now go look at the most successful writers in that genre. Done? Yeah, not much diversity there, is there? Now go look at the important awards. Look back a few years. See a trend? Yeah, I don’t think quality is necessarily the main thing giving the prize winners’ list a sense of cohesion.

We shouldn’t be afraid to point these things out. We shouldn’t fear for our careers because we’re “stepping out of line.” We shouldn’t keep seeing books with gay and brown and black and poor characters who are grossly misrepresented and caricaturized because the writer creating them has no idea what s/he’s doing. We shouldn’t keep seeing books with atrocious Spanish because the writer doesn’t know the language and the editor doesn’t know the language and they don’t care enough to ask someone who does. No Latino writing in this country should be told that a few Noble Prize winners never complained about diversity. If that is your argument, here are some words from 2017 Noble winner Kazuo Ishiguro’s acceptance speech:

It’s hard to put the whole world to rights, but let us at least think about how we can prepare our own small corner of it, this corner of 'literature,' where we read, write, publish, recommend, denounce and give awards to books. If we are to play an important role in this uncertain future, if we are to get the best from the writers of today and tomorrow, I believe we must become more diverse.

I mean this in two particular senses. Firstly, we must widen our common literary world to include many more voices from beyond our comfort zones of the elite first world cultures. We must search more energetically to discover the gems from what remain today unknown literary cultures, whether the writers live in faraway countries or within our own communities. Second: we must take great care not to set too narrowly or conservatively our definitions of what constitutes good literature. The next generation will come with all sorts of new, sometimes bewildering ways to tell important and wonderful stories. We must keep our minds open to them, especially regarding genre and form, so that we can nurture and celebrate the best of them.

I stand with Ishiguro. I stand with any minority writer who’s been turned down because their book is great but publishers don’t know if they can sell it. I stand with the hustlers that keep doing this thing when no one is listening. I stand with the writers with a hyphen as part of their identity who work knowing they won’t get equal opportunities.

We shouldn’t let assholes silence us with dumb comebacks online. We shouldn’t remain calm as so many work for the perpetuation of the status quo. We shouldn’t accept bad excuses like the ones listed above. We shouldn’t equate sales with quality. Is soda good because they sell a lot of it? Well, the opioid business is thriving, so those are great, right? We shouldn’t stay quiet when someone says a cry for diversity is a cry for pushing those at the top out of the picture. It’s not. There’s space for everyone. All we ask is to make the playing field equal so others can play ball on the same level. All we ask is for a little less bias. All we ask is for a system in which your chances of success don’t diminish if your skin isn’t white or your name is hard to pronounce or you like folks of the same sex. Why? Because none of that has a fucking iota to do with your talent as a writer. That’s not too much to ask. It’s fair. The options are simple: either we find a way to get there working together, helping each other along the way, or we will make it happen over a much longer period but in a much more chaotic and revolutionary manner. Change is coming…or we’re dragging it here kicking and scream.

As on point as this article is, I am sorry to say that at least some of your detractors may be correct. The goal for publishers will always be money and it is the readers that dictate which books are producing revenue streams.

Readers in America, by and large, are ironically staid and stagnant. They have select genres, subjects, or authors that are comfortable and they don't go looking for anything outside that box and actively shun 'New or diverse' when it is waved in their faces. Sadly, that true for more than just books.

I can't count the times I have asked an online group of supposedly diverse readers a question about topics, stereotypes of readers, and books genre and gotten shut down with answers like "I won't/don't read that", with no consideration for merit. It goes across publishing as a whole.  It is why there are so many posts that start, "I don't get it, I just read this bestseller that everyone is raving about and I hate it" and get multitudes of responses that agree with that confusion because they hated it too, BUT,  everyone is just raving about that book. Sadly humans are still herd animals and as such prefer the status quo.

This attitude is also why marketing Indie and self-published books are so difficult. While there is more that publishers can do, it can't exactly be said that diverse books and authors aren't being marketed by the publishers, my inbox is filled with them. Of the 200+ emails I receive a day fully half are about diverse books. That is just one marketing strategy. It is not that readers aren't getting the options, they just aren't choosing them.