No, You’re Freaking Out About Your New Book! 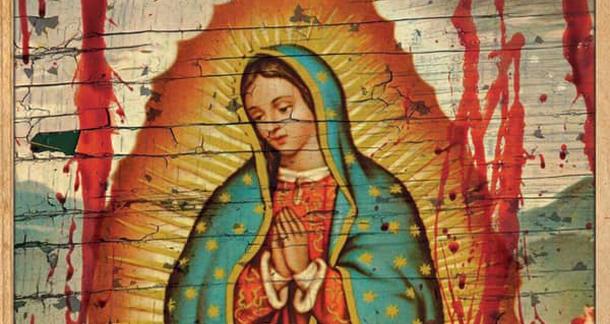 Listen, writing is the greatest gig in the world. It really is. I wouldn’t change it for anything. Some of the best people I’ve met and the coolest places I’ve been to have entered my life because of books. That said, some parts of it are…well, there’s a reason why most authors are slightly insane. In my case, I write because I have stories to tell, things to say, messages to deliver, imaginary people to kill, magic to explore, and a vision of identity, Otherness, violence, crime, and syncretism I want to share with the world. Once I have accomplished all of those, I also want people to read my words because they are entertaining and fun. And I want them to like what they read. Yeah, I want them to like my words a lot so I can write another book and maybe even make some money doing it.

In any case, here is the good news: my new novel, Coyote Songs, is out now! You should totally buy it. You should buy one for you and one for every friend you have. Oh, and buy one for your enemies as well, especially if they’re angry conservatives. Angry conservatives love my multicultural, bilingual work. Anyway, there is also bad news: I know that some people won’t like Coyote Songs and I can’t guarantee it will make as much noise as my previous book, Zero Saints.

I write because I have stories to tell, things to say, messages to deliver, imaginary people to kill, magic to explore, and a vision of identity, Otherness, violence, crime, and syncretism  I want to share with the world.

Don’t think for a second that I’m complaining. I love the fact that this thing is out in the world, and I hope to find new eyes for my work. However, I’m also freaking out about the reaction it will get. Folks who loved Zero Saints have been waiting for three years. If I disappoint them now, I’m going to feel like the guy who threw up the buzzer-beater and missed the rim entirely. And you know what scares me the most? I really don’t know more about what people will dig than when I wrote my previous three books. Some authors obsessively study market trends, listen to their agents, and produce the book that will best fit what folks are looking for. I do not care for trends, have no agent, and don’t care if the books fits anywhere because barrio noir is what it is and I love horror and crime as much as I love weirdness and bizarro.

Let me tell you a story. I promise I’ll keep it short. I’m an indie author. As such, I don’t expect to find my books at the top of the Amazon or New York Times lists. But that doesn’t mean I would dislike it if I did. You see, I know that what I write, barrio noir, is too full of horror for most crime readers and too packed with crime for the horror lovers. Oh, and it’s way too weird for the literary fiction crowd. My work also contains a political message and usually packs enough Spanglish to order a meal and tell someone to fuck off in at least 20 countries in the world. This means it’s not for everybody. I’m lucky my previous novel found such a great audience. It was translated and published in Spain, optioned for film, and nominated for the Wonderland Book Award. Those things gave me confidence. It’s easy to have confidence when something is already out there and it’s been received well by people. When you have something entirely new, the story is a bit different.

With Coyote Songs, I wanted to bring more violence and mayhem to the table, but wanted to do it within a narrative that would destroy people a bit. I also tried to do it while flexing some writing muscles because fuck the idea that pulp can’t walk into a room and smash a bottle in literary fiction’s face. Oh, and then I decided it would be blurbed only by women because I’m done with patriarchy. See? Somewhere there’s a dude mansplaning to me right now how I’m sabotaging myself. I hope that dude buys the book. I hope he reviews it. Hell, I hope this one collects 10,000 1-star reviews as long as they all say “Verifed Purchase” at the top.

Listen, I always keep it honest. This is honesty: I’m nervous. I want people to like this book. I also want it to be bigger than Zero Saints. I want someone to give it an award so that the folks who mostly read books that have won awards will give it a chance. I want to satisfy every reader who’s been with me since day one and say “Look, I’m a little better than I was before! Thanks for everything. I love you.” I want the book to do well because every book sold is like someone telling my publisher “Nicely done, homie. Keep publishing women and brown folks. We support this.” I want it to illuminate the frontera conversation we have to have all the time, because it matters.

Anyway, the book is out there. I’m still here. I’m already writing the next one. I won't stop. I really hope you read/like Coyote Songs. Thank you very much if you’ve ever read my words. If you did and you hated them because the Spanglish made you mad or hate this one because it's all about women and migrants…*middle finger* My nerves will disappear as soon as I get invited to a reading. Thanks for listening to me. Much love.

Dino Parenti from Los Angeles is reading Everything He Gets His Hands On November 3, 2018 - 9:07am

I was going to buy the book anyway, but this cemented it: "...because fuck the idea that pulp can’t walk into a room and smash a bottle in literary fiction’s face."

Keep punching your way into the conversation.

I'll be hitting up AMZN on my next click, purchasing Zero Saints and Coyote Songs, which I will read in order. Barrio Noir sounds like a genre I would love; and if your politics causes a few worked up conservatives to stomp their feet and froth at the mouth well, that's just the cherry on top.

Based on your article above, I got a felling you'll like this.

I posted it in the "General" Section of Community, but not much traffic over there nowadays.

Seems to me you're an Algren man. You might not know it yet, but you are.

The Midnight Wisdom of Nelson A.

“You don't write a novel out of sheer pity any more than you blow a safe out of a vague longing to be rich. A certain ruthlessness and a sense of alienation from society is as essential to creative writing as it is to armed robbery.”
― Nonconformity

“A book, a true book, is the writer's confessional. For, whether he would have it so or not, he is betrayed, directly or indirectly, by his characters, into presenting publicly his innermost feelings.”
― Entrapment and Other Writings

“The less he sees of other writers the more of a writer he will ultimately become. When he sees scarcely anyone except other writers, he is ready for New York.” (Nellie didn't like the NYC publishing houses or the gossipy cliquish writers he found there).
― Interview

“If you feel you belong to things as they are, you won’t hold up anyone in the alley no matter how hungry you may get. And you won’t write anything that anyone will read a second time either.”
― Interview

“Nor all your piety nor all your preaching, nor all your crusades nor all your threats can stop one girl from going on the turf, can stop one mugging, can keep one promising youth from becoming a drug addict, so long as the force that drives the owners of our civilization is away from those who own nothing at all.”
― Never Come Morning

“American literature isn't anybody phoning to anybody or anybody writing about anybody. American literature is the woman in the courtroom who, finding herself undefended on a charge, asked, 'Isn't anybody on my side?' It's the phrase I used in Never Come Morning, that was once used in court of a kid who, on being sentenced to death, said, 'I knew I'd never get to be twenty-one anyhow.”
― Conversations with Nelson Algren

“And the men come on again: the flashy and the penitent, the beaten ones and the wise guys, the hangdog heel thieves and the disdainful coneroos, walking, half crouched, through a downpour of light like men walking through rain. The frayed and the hesitant, the sleek and the bold, the odd fish and the callow youths, the good-humored bindle stiffs and the bitter veterans.”
― The Neon Wilderness

“I bet you think fellas are the ones to remember a girl -- don't you?"

He shook his head hurriedly, that he'd always thought that.

"Fellas have all the fun 'n she just sees one right after another, so it seems like HE'D remember her, better 'n SHE'D remember him, only it works the other way around. I ain't forgot one single fella, all these years. But I bet there ain't TWO 'd know me from a bag of bananas this minute.”
― Never Come Morning