Narrative Mechanics in Hearthstone: How a Card Game Can Tell a Story 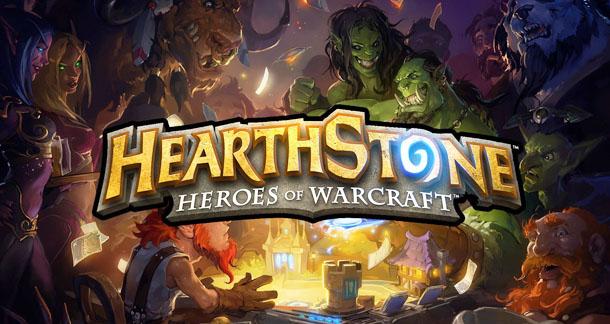 Hearthstone: Heroes of Warcraft is one of the most popular video games in the world. A free-to-play game available on nearly all computers, tablets and phones, where it entertains over 75 million players. It is frequently the most-streamed game on Twitch, and as of this writing a search for the title on YouTube returns nearly 3 million hits. This game just turned two, but it already has a thriving eSports scene with pro players from all over the world competing for massive prize pools while tables of analysts pick apart their every move. People are building careers around this game. And it’s not a first person shooter, realtime strategy, or even a fighting game. You play cards in the hopes that with the right amount of cleverness and luck you can outmaneuver your opponent and claim victory. This familiar play style coupled with the more fantastical elements has led fans to give it the affectionate nickname “wizard poker.”

Unlike most other competitive video games, Hearthstone is watched and enjoyed by people who don’t really play it themselves. Perhaps it’s because of the conceptual similarity to poker, which had its own heyday as a spectator sport. It also helps that the game’s design makes everything very readable so that it’s easy to quickly figure out what’s happening. A round of Hearthstone, though rarely long, is much slower paced than a match of Counter-Strike: Global Offensive or StarCraft II, which gives the audience time to understand and react to impressive plays. It also provides them ample time to appreciate the stories baked right into the cards themselves. I’m not talking about the history and lore of Warcraft. Everything I’ve heard and read suggests that many cards are accurate portrayals of their source material. (For example, the legendary dragon Deathwing destroys pretty much everything when he comes into play, a reflection of his world-shattering arrival in World of Warcraft.) That’s great for the fans, but Hearthstone was the first introduction to this world and its characters for many of its players, myself included. Despite my lack of previous knowledge, I was delighted to discover I was still able to understand and appreciate the stories the cards had to tell. 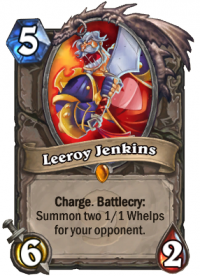 Take the legendary minion Lord Jaraxxus. This card tells a classic Faustian parable all by itself. When summoned, this demon destroys the player’s character, replacing it and giving you access to his unholy powers. As is true of most demonic pacts, Jaraxxus’ power comes at a price: his limited health pool. Although this card can win the game by itself, if you can’t finish your opponent fast, the demon will be your undoing. Even stories from the World of Warcraft community have been crystallized into a card, like the infamous Leeroy Jenkins. This minion can attack immediately, charging into combat with his eponymous battlecry. While he can deal a significant amount of damage, playing him also summons two dragon whelps for the opponent—just enough to ensure that Leeroy almost always meets a fittingly reckless end.

Part of what makes Hearthstone so easy for the newcomer to parse is the minimal amount of text used on the cards. Major gameplay mechanics have been reduced to bolded keywords, so that a player can quickly puzzle out what a card will do, even if it’s brand new. A lot of these are just useful effects—spells that draw you extra cards or clear your opponent’s board, minions that increase your spell damage or defend you from attack. But many of these cards also manage to turn their mechanics into complete, self-contained tales. One of the more significant mechanics is Deathrattle, which is something that happens when a certain minion dies. A haunted spider that summons ghost spiders after death, or a mech that leaves behind a pilot when destroyed. My personal favorite among them is not even a particularly useful card; it’s the gameplay equivalent of a joke. The Wobbling Runts card looks like three tiny men stacked inside a trench coat to appear taller. When it is “killed” it tumbles apart into three smaller minions, each with their own unique art, name, and voice. It’s never won me any games, but I laugh every time it happens.

Over time, Hearthstone has managed to tell increasingly complex stories within their card game. The addition of single-player adventures, in which players battle against AI-controlled boss characters with unique decks, are the closest thing to a traditional linear story in the game. League of Explorers, the latest adventure, sends players on a quest around Azeroth to recover pieces of a powerful artifact before the villain can get his hands on it. One stage completely flips the typical mechanics of the game to simulate a daring escape from a collapsing temple. Instead of trying to defeat your opponent, the goal was to use your cards to survive the onslaught of totally unfair threats the game throws at you for ten turns. If you manage to win, you’ll definitely have that elated feeling that accompanies narrowly avoiding a certain demise. 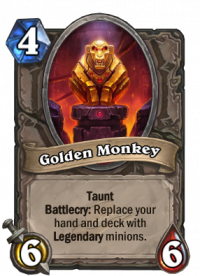 But it’s not just these carefully constructed add-on adventures that are telling bigger stories. Blizzard keeps finding ways to squeeze more narrative out of a card. Let’s look at Elise Starseeker, a legendary minion you can unlock in League of Explorers. When played, she shuffles another card, The Map to the Golden Monkey, into your deck. After you draw and play the map, it shuffles the Golden Monkey into your deck. If you finally manage to unearth the Golden Monkey, every card remaining in your hand and deck gets transformed into powerful legendary minions, a turn of events that can completely swing the outcome of a game. If both players have Elise Starseeker, the game becomes an exciting race to see who can dig up the magic artifact first, and what doom will rain down upon the one that doesn’t draw it. Every time it comes out in tournaments the commentators start the wild speculations that culminate in breathless excitement when the Golden Monkey finally hits the board. Like any good maguffin, it raises the stakes and adds a little extra drama.

The latest expansion, Whispers of the Old Gods, is pushing the game’s storytelling capabilities even further. A quartet of Lovecraftian Old Gods have been added to the collection, and their eldritch influence has corrupted other cards. Twisted versions of classic minions accompany an army of cultists that form the narrative backbone of this set, along with a new legendary minion, C’thun. This card derives its strength from its followers, as every cultist you play will enhance the Old God’s stats whether it is in your hand, deck, or on the board. Every time you do this, a dark portal opens on the side of the board, affording both players a glimpse at the slumbering god as its terrible power grows. Your opponent will know that C’thun is coming, and had better do everything they can to end the game before that cosmic terror wakes. When that happens, a torrent of damage is unleashed that will likely destroy any enemy minions and possibly kill your opponent as well. Many have tried and failed to make entertaining video games about Lovecraftian horror, but Hearthstone nails the mounting dread with just a handful of cards.

Hearthstone is a fairly impressive achievement in video game storytelling. Most games will try to pad out their plots with cutscenes, character dialogue and various “narrative objects” (emails, audio logs, etc.) that will directly tell you the story as you encounter them. And while these devices have served us well for the history of video games, when they are used it always feels like games are borrowing from other mediums rather than telling the story in their own unique way. If a movie scrolled a wall of text down the screen every time they wanted to communicate what a character was thinking or feeling, it would feel out of place. Hearthstone finds many ways to tell its stories using the unique tools of its medium: gameplay mechanics. It’s the ultimate form of “show, don’t tell.” You don’t have to read a diary entry or watch a cinematic to understand the story—you experience and understand it simply by playing the game.

Ready Writer One: An Interview With Gabe Durham Of Boss Fight Books

Dammit!!!! More stuff to keep me from writing....but it looks to fun not to play.

I was a big D&D fan when I was younger, as well as MtG.

Will I ever grow up?