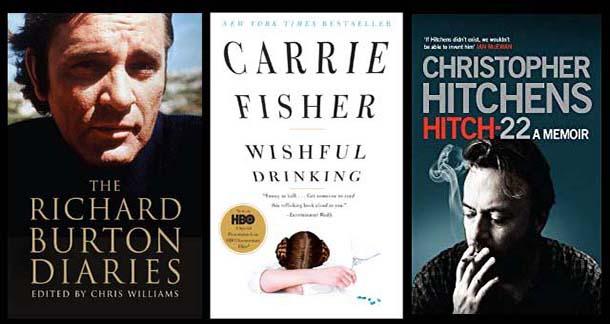 Like many writers, I was reared on a never-ending veneration for big guns such as Ernest Hemingway, F. Scott Fitzgerald, James Joyce, and Virginia Woolf. Authors who’ve passed some ‘immortal’ litmus test for stuffy academic types to get overly excited about. Harsh? Perhaps, because most of the top tier lit club have deservedly earned their marks. But along the path I’ve learned some of the best prose originates from sources other than these writing titans. Here are two actors—who apparently fancied putting pen to paper over starring roles—and one journalist that I would stack up with the best of the best and have returned to often for inspiration.

Burton, along with wife Elizabeth Taylor, ruled Hollywood during the 1960s, attaining mega stardom where their every move was dissected by the salivating press. Unlike Diva Liz who basked in the limelight, Burton often despised the attention and loathed moviemaking in general, preferring the solitude of a good book (mysteries and thrillers were a big part of his diet), and privately longed to be a writer. A few of his pieces were published in various magazines and periodicals over the years, but the full extent of his talents was displayed with the release of The Richard Burton Diaries in 2012. Written periodically from the time he was a child until a year before his death, he guides us behind the scenes of not just the cyclone Liz & Dick show, but peels back the facade on personalities like Lucille Ball, Andy Warhol, and Warren Beatty (“He’s not out of the top drawer.”) Some of his harshest criticism he leaves for himself, especially, in part, because of his lifelong battle with the bottle. But the full depth of Burton is on display throughout:

The more I read about man and his maniacal ruthlessness and his murdering envious scatological soul the more I realize that he will never change. Our stupidity is immortal, nothing will change it. The same mistakes, the same prejudices, the same injustice, the same lusts wheel endlessly around the parade-ground of the centuries. Immutable and ineluctable. I wish I could believe in a God of some kind but I simply cannot. My intelligence is too muscular and my imagination stops at the horizon, and I have an idea that the last sound to be heard on this lovely planet will be a man screaming.

Stirring, evocative language heightened by a poet’s flourish. As a fellow chronicler of daily events, I often remember Burton’s method for keeping a journal thought-provoking for the ages is not just juicy gossip and name dropping but curlicue prose.

She’s foremost remembered, to a legion of fans, as Princess Leia in the George Lucas Star Wars space opera. Then as the daughter of Debbie Reynolds, and, sadly, for her recurrent use of drugs that culminated in her untimely death at age sixty. All lives are complex and there were, of course, many additional sides to this fascinating woman, my favorite being her gift of revealing memoir. After ‘falling in love’ with her as a teen (yes, I confess, that gold bikini in Return of the Jedi was the initial stepping stone), I found her Dorothy Parker wit and sobering honesty in Postcards From the Edge compelling. Loosely based on her relationship with her mother, it revealed a daughter coming out from the shadow of her larger than life parent. More books followed including Wishful Drinking (2008) with this humorous, sparkling excerpt:

Now, George came to my show when it was in Berkeley. He came backstage and explained why you can’t wear your brassiere in other galaxies, and I have a sense you will be going to outer space very soon, so here’s why you cannot wear your brassier, per George. So, what happened is you go to space and you become weightless. So far so good, right? But then your body expands? But your bra doesn’t, so you get strangled by your own bra. I think that this would make for a fantastic obit, so I tell my younger friends that no matter how I go, I wanted it reported that I drowned in moonlight, strangled by my own bra.

Don’t be afraid to be blisteringly honest is what Ms. Fisher has schooled in me, and if the passage calls for a pivotal “fuck,” don’t shrink from profanity, and, whenever possible, add humor to send it all over.

Hitch was an author, orator, social critic, literary critic, religious critic, essayist, and journalist to check off just a handful of boxes for this larger than life juggernaut. He was an advocate of left leaning causes, though no ideologue—he supported the war in Iraq to the consternation of many raised eyebrow. He also ridiculed many beloved personalities including Princess Diana, Bob Hope, and Mother Teresa. To find an equal to Hitch’s robust oratory skills you may have to jump back as far as Cicero or Demosthenes, for he possessed an acerbic style able to leave many an opponent embarrassed and grasping for words. Dwight Garner in The New York Times wrote, “He has a mind like a Swiss Army knife, ready to carve up or unbolt an opponent’s arguments with a flick of the wrist.” From his 2010 autobiography Hitch-22 he offers some guiding advice:

Beware the irrational, however seductive. Shun the ‘transcendent’ and all who invite you to subordinate or annihilate yourself. Distrust compassion; prefer dignity for yourself and others. Don’t be afraid to be thought arrogant or selfish. Picture all experts as if they were mammals. Never be a spectator of unfairness or stupidity. Seek out argument and disputation for their own sake; the grave will supply plenty of time for silence. Suspect your own motives, and all excuses. Do not live for others any more than you would expect others to live for you.

Hitch eloquently wrote about topical matters with an expansive vocabulary, and no subject was off limits when he set his sights on an injustice or an absurdity begging to be unveiled. Lesson learned: choose words of distinction strategically positioned so they hit like bombs to make unequivocal, persuasive arguments.

So those are my off-the-beaten path stimuli. Yours?