My Life Dumpster Diving for Books 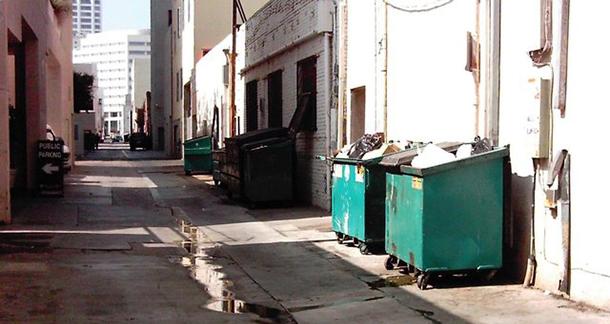 It’s eight minutes past midnight on a warm summer Texas night. I’m sure most of the city’s relatively young residents are out enjoying adult beverages, live music, and the company of wonderfully inebriated cohorts. Not me. Instead of cavorting downtown, I’m sweating inside a dumpsters full of books in the back of a parking lot, using my phone’s flashlight to dig around the massive pile of discarded tomes under my feet. I’m looking for treasures I can recycle. You know, one man's trash and all that. But wait, let’s go back in time for a second so I can tell you how I ended up in that dumpster full of words.

Books are my passion/obsession. I ride the bus everywhere and sometimes can’t afford hot sauce. I've been forced to eat Ramen without a side of cool irony and I've stolen toilet paper from work. That being said, my book collection is massive. However, no matter how many books are piled in, on, and around my bookshelves, I always want more. Nah, scratch that; I need more. Being in the review hustle has given me the power of acquiring new books I really want with an email, but the same can’t be done with classics and books I crave that have been out for a while or those I don’t know about until I see them on a store’s shelves. Almost every weekend I head down to any of the local used books stores and dig around for gems in the clearance aisle. Half the time I go home empty-handed, but the other half I end up with anywhere between one and half a dozen books. When you add that up, you get yet another considerable yearly expense, and that’s what led to the literary dumpster diving.

Maybe some of you think breaking a few laws and jumping into dark dumpsters at midnight is an awful way to procure your next read, but it certainly beats sitting at home waiting for that Goodreads giveaway.

One day I was walking out of my favorite local used books store when I saw two guys exiting through a side door. The men were dragging a couple of plastic trash cans out to a dumpster behind the building. One of the guy’s grip slipped and the contents of the trash can came tumbling out—books. I wasn’t far, so I saw a few that looked in great condition. I kept walking and thought the books had probably gotten wet, become worm food or were otherwise damaged. Despite trying to convince myself that I’d only seen books that deserved to be in the trash, that tiny voice that has always brought me trouble kept talking to me: “Man, some of those books looked just fine. These dudes are getting rid of good books and you’re an idiot for not caring. If you don’t check it out, you’ll always have that doubt in the back of your head…and I’ll keep talking to you about this.”

I went home and the damn voice wouldn’t shut up about the books. That night, as soon as I knew the store was closed, I went back. I stood outside a tall chain link fence and looked at the dumpster inside. Curiosity was eating away at me with the force of a bucket of sulfuric acid. I had to know. I took one look around for cameras and all my past criminal acts came back to me like one of those bad montages you see in straight-to-Netflix action flicks. I blinked twice and found myself on the other side of the fence. I peeked inside the dumpster. Magazines. Torn paperbacks. A few outdated textbooks. And some hardbacks. James Patterson. Michael Connelly. Patricia Cornwell. Stuff I read years ago and wouldn’t touch now…but someone else might. Hell, a lot of people do, that’s why those names are perennially stuck on best-seller lists. Back over the fence in a jiffy. Plans to come back another day started brewing in my head.

Life did its thing and I wasn’t able to go back for almost a week. Then came Friday night. I was standing next to the fence at midnight. The place was quiet. I jumped to the other side and then climbed into the dumpster. After digging around for a few minutes, I had about a dozen books that still deserved a home. Then I realized I’d failed to prepare for this and learned how hard it is to jump out of a dumpster and over a fence while carrying a dozen books under your arm. (I learned all about being prepared during an awful night in which I led a group of drunken criminals on an unsuccessful attempt to steal some jumbo koi fish from a Japanese restaurant. Apparently I forgot everything I learned that time. Anyway, that's another story.)

A few days later I made my way to a bookstore a couple of miles down from the one whose books I wanted to sell. The transaction was smooth and the guy at the counter handed me a pittance. Despite the small sum, I was able to go home with two books and the knowledge that this hustle was worth exploring a bit more.

I went dumpster diving two times in the same amount of weeks, both times prepared (a simple bag makes getting in and out a lot easier), and found myself with enough books to make me think another trip was in order. The second time around, I got almost three times what I got the first time, and it was immediately converted into more books. Now I’m working on acquiring bounty for a third trip.

Okay, so why am I sharing this with you? Three reasons. First, it’s a great way to give books new homes and get books you want for free. Second, from what I’ve seen so far, there’s no rhyme or reason behind the way bookstores decide what should go in the trash, and that’s wrong. Last but not least, yeah, free books are awesome, but free books that are the product of a slightly illegal hustle are even better. Sure, this isn’t for everyone and maybe some of you think breaking a few laws and jumping into dark dumpsters at midnight is an awful way to procure your next read, but it certainly beats sitting at home waiting for that Goodreads giveaway to come your way.

10 Reasons Why Books Are Always Better Than Boys

10 Things Only Hardcore Bookworms Do

Ten Problems Only Booksharks Have