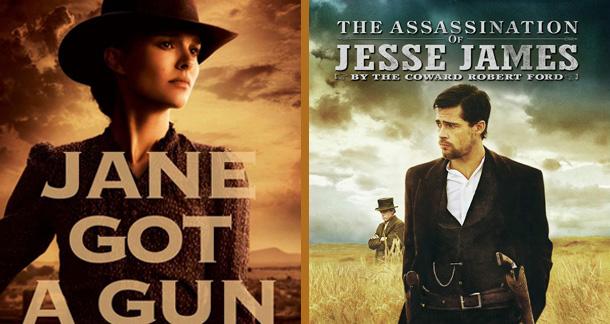 The Western ran dry in movies and television by the early 1970s for many reasons, though not for lack of quality material. There were plenty of talented writers looking to improve the genre by going deeper than the outmoded stereotypical plots of cowboys vs. Indians, range wars, and the lone gunman, to name a few. Hollywood being a cold money-making machine, when Western films began failing at the box office in favor of space operas and godfathers, their attention waned.

Fifty years later, a plethora of exciting novels and screenplays have been turned into fresh film perspectives. Here are five that get it right.

In 1871’s New Mexico Territory, Jane Hammond's (Natalie Portman) husband Bill (Noah Emmerich) returns home bullet riddled by the revenge seeking Bishop Boys (Ewan McGregor, Boyd Holbrook). After stabilizing him, she gets her young daughter to safety and seeks out assistance from an old boyfriend, Dan Frost (Joel Edgerton), who at first is reluctant to help, still smarting from losing her years before. He eventually does, and through well-sprinkled flashbacks we learn about their relationship and why the Bishops are seeking to kill Jane's husband in the first place.

This film opened to mixed reviews and died at the box office, but don't let that discourage you from watching one of the best Western action movies of recent years, led by Ms. Portman in a memorable performance. From a tear-stained face as she says goodbye to her little girl to the steel in her eyes as she shoots down a gunslinger, she puts her stamp on the genre as an intelligent, complicated protagonist. And in an era where the emphasis has turned to revisionism or hybrid Westerns, damn if it isn't nice to have straightforward storytelling with a climax that actually delivers the goods.

Brian Duffield is a screenwriter known for The Babysitter (2017) and Underwater (2020). Jane Got a Gun was selected from a Black List script—screenplays that are the "most-liked" but not yet produced. Mr. Duffield gives time for his characters to develop and when the action does come, the audience is fully invested. The film’s success may have had a troubled, lackluster start, but Jane Got a Gun will age well.

Get Jane Got A Gun at Amazon 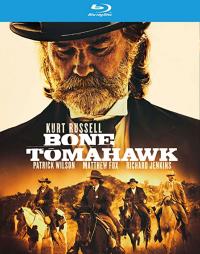 Of all the films on this list, Bone Tomahawk is by far the most outlandish, downright cruel, and above all entertaining. A weird western that takes the old premise of the white woman captured by "savages" and turns the offensive trope on its head but will likely offend those who are squeamish with scenes of extreme gore. Here we are introduced to cannibalistic troglodytes who live in the “Valley of the Starving Man.” Yeah, that name alone should ward off anyone who doesn't wanna be on the lunch menu.

Sheriff Franklin Hunt (Kurt Russell) and his town of Bright Hope are seemingly up against supernatural forces when they begin hearing otherworldly roars in the distance and then a machete slicing the air. Soon, the population number dwindles when the town’s deputy, a prisoner, and a doctor’s assistant named Samantha O’Dwyer (Lili Simmons) are kidnapped by people-eating humans looking for easy pickings to resupply their pantry. Hunt leads a posse of several men in search of their missing, including Samantha's bigoted former suitor, played by scene stealing Matthew Fox—you immediately begin rooting for the human-flesh eaters to take out the lout.

Director Steven Craig Zahler, who also penned the screenplay, is an author with several novels under his belt including the crime thriller Mean Business on North Ganson Street (2014). Whether printed page or silver screen, Mr. Zahler adheres to the first narrative rule: Never be boring, keep the action moving.

Get Bone Tomahawk at Amazon 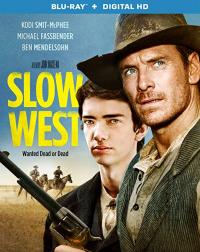 The trailer for Slow West had one of the finest marketing taglines: “In a land beyond law, the most dangerous are the last to fall." For a welcomed change of pace, the story unfolds with a Scottish protagonist, Jay Cavendish (Kodi Smit-McPhee), about to navigate the alien to him—Colorado of the 1850s. He's looking for Rose Ross (Caren Pistorius), and through flashbacks, we learn that Jay was in love with Rose, and later on, that his uncle was accidentally killed by her father.

In America, Jay runs into gunslinger Silas Selleck (Michael Fassbender), who, for a price, offers to guide and protect him through the lawlessness. Jay accepts, knowing he is a stranger in a strange land and won't survive long enough on his own to locate Rose without Silas’s help. Told from dueling points of view, we learn that Silas is also in search of Rose, for the $2000 bounty that is on her and her father’s head, and Jay is the Judas Goat leading the way.

John Maclean, who crafted the screenplay and directed the film, has an obvious devotion to the Western genre and successfully evades cliché. Slow West features a depth of perspective that is masterfully executed, reminding me of classics like Man of the West (1958) and McCabe & Mrs. Miller (1971).

Get Slow West at Amazon 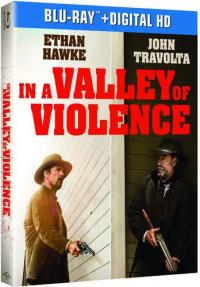 On their way to Mexico, Paul (Ethan Hawke) and his dog Abbie stop in the desolate, dust-swept town of Denton, run by Marshal Clyde Martin (John Travolta) and his son Gilly (James Ransone). In classic Western cadence, Gilly tells Paul to git and ends up in a fight with the stranger, getting his ass kicked. The marshal knows his offspring is a dolt, and respectful of the fact that he recognizes Paul as an Army man, he directs him to move along peacefully. But Gilly is still smarting from the public shaming, so he tracks down Paul, and with the help of three buddies, they throw him over a steep cliff. Paul survives and exacts revenge. Seems standard Western fare, right?

And it is, except in the hands of director Ti West, it's teeming with fresh, crisp direction, editing, and quite a bit of welcoming humor. The film jumps from brutal action and disturbing gore to laugh out loud slapstick. Travolta is a particular hoot as he tries to goad his scaredy-cat deputies into engaging Paul who is systematically picking them off. Ethan Hawke and Taissa Farmiga (playing a teen who wants to help Paul but is rebuffed) turn in some particularly strong performances. Hawke is tailor-made for the brooding stranger with a dark past, and after his roles in The Magnificent Seven and In a Valley of Violence, here's hoping he'll return to the saddle before too long. A special mention goes to Jumpy who plays Abbie—I haven't seen a dog since Asta (The Thin Man) or The Duke's mutt in Hondo with this much character—where a canine sidekick becomes an emotional cornerstone of the movie.

Director Ti West, who created this story, is known for horror movies like The Roost (2005) and The House of the Devil (2009). I believe it is his ability to write suspense that translated so well from horror to the frontier landscape. After all, the real west and the one imagined in most Hollywood films is populated by monsters masquerading as ordinary individuals.

Get In A Valley of Violence at Amazon

The Assassination of Jesse James by the Coward Robert Ford (2007)

The Assassination of Jesse James by the Coward Robert Ford stars Brad Pitt as James and Casey Affleck as Ford. The film is definitely a character study and takes its time telling the legend. It's a triumph of voice over gunplay. To a great many mid-westerners and southerners, James was a modern day Robin Hood who fought back against the unfair reconstructionist period following the Civil War. By the time he was killed in 1882, he was a controversial, larger than life figure. Brad Pitt, who knows a thing or two about celebrity himself, plays a paranoid, world-weary James to perfection. While Pitt’s good looks have always seemingly overshadowed his acting, in Assassination he turns in a robust performance.

Affleck is equally superb in his performance in what can only be described as unsettling. His near infatuation, or love, if you will, for Jesse steadily turned into an opportunistic decision to become as celebrated as the infamous outlaw. After James’s death, Ford went on to reenact the day he killed Jesse James to packed theaters and, by his own account, “kill him” over eight hundred times. At first, the cheering crowds ate up his performance. Ultimately, the audience grew dubious and began greeting him with jeers. His star fell as quickly as it ballooned. Ford’s immaturity and his inability to handle his new-found notoriety became his biggest burden. As the film wraps up with the 30-year-old man reflecting on his poor choices, Affleck succeeds in garnering some sympathy toward the character.

If you haven't seen Assassination or read Ron Hansen’s book on which the movie is based, I'd recommend starting with the film and then expand to the 1983 historical novel that leaves no aspect of this story unearthed. This isn’t because, as the old saying goes, the book is better than the movie—you won’t be disappointed by either. The movie packs in what’s needed and maintains the integrity of the story, while the book threads out into even more backstory that the film doesn't have time to follow.

Get The Assassination of Jesse James... at Amazon