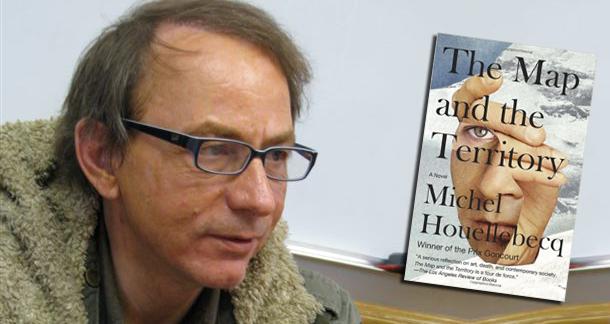 Michel Houellebecq is known as one of the most celebrated and controversial authors today. If you haven't read him yet, you should.

I discovered this author because I'm a sincere Francophile. I love the language, the architecture, the art, the music, the WINE! I imagine no one there judges you for day-drinking a good bottle of Miraval Rose before noon in a café while you write your latest article (they all look at me funny when I do that here in Southern Ohio). I even wrote a short horror story set in a brothel in modern-day Paris—because if the best backdrop for a spurned prostitute's revenge isn't a Parisian brothel, then I don't know what is.

There is an abundance of great modern French writers on the scene today. I picked up some newer fiction, randomly, from my library (because I do still like those things with the paper pages you can physically turn and don’t have to hook up to a charger daily…you know the ones...ah yes, printed books). It was a translated book from French author Michel Houellebecq. His latest, called Submission. It was an awesomely strange read to accidentally stumble upon, and worthy of your time if you are looking for something darkly humorous and intelligent. A political satire set in future Paris, it’s quirky, witty, and controversial. Everything I love in a novel. 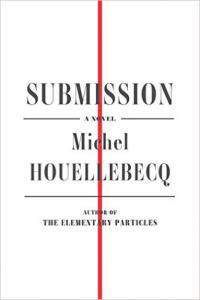 Notes On The Cover Blurb

Now, sitting on the questionable carpet of my library and poring over many book blurbs, I was hooked by this one right away. This guy is detached and relatively antisocial. He has to work to get by, but all he wants to do is cuddle up with his favorite nineteenth century author, and, incidentally, sleep with his favorite former student, Myriam. I can relate to much but not all of this. I won't bore you with specifics. The blurb continues with:

Meanwhile, it's election season. And although Francois feels "about as political as a bath towel," things are getting pretty interesting. In an alliance with the Socialists, France's new Islamic party sweeps to power. Islamic law comes into force. Women are veiled, polygamy is encouraged, and François is offered an irresistible academic advancement—on the condition that he convert to Islam.

Wowsers. I found I can also relate to François’s passion for politics here (none), and I decided this was definitely a good choice for me. I'm very careful with what I invest reading time in, because I have to read all day and night and oftentimes weekends to earn a living. The story's relevance to today’s controversial election news and religious extremism is there—to the point of being eerie at times. Near the beginning of the book, we learn that violent outbursts and murder are so commonplace that all one can do is stay indoors or be sure to take a cab rather than walk home from the pub while the political-religious groups riot, sort of like avoiding an inconvenient heavy rainfall. François’s offer of academic advancement in exchange for conversion to Islam is ultimately an ironic one, for he finds everything Huysmans wrote after his conversion to Catholicism to be boring and unrelatable—one of the main reasons being that François can't understand the author's later "disgust he claimed to feel for the carnal passions." We learn that at forty-four, our narrator already suffers from a variety of age-related maladies—headaches, rashes, hemorrhoids, and such. But one body part in particular has yet to betray François:

When you got right down to it, my dick was the one organ that hadn't presented itself to my consciousness through pain, only through pleasure.

Houellebecq may give us a cynical narrator with a sardonic sense of humor, as demonstrated in this passage:

The academic study of literature leads basically nowhere…Still, it’s harmless, and can even have a certain marginal value. A young woman applying for a sales job at Céline or Hermès should naturally attend to her appearance above all; but a degree in literature can constitute a secondary asset, since it guarantees the employer, in the absence of any useful skills, a certain intellectual agility that could lead to professional development—besides which, literature has always carried positive connotations in the world of luxury goods.

But the author indeed gives the reader an upside. There is a glimmer of passion in François for the art of the written word that he can't deny (not for lack of trying):

Only literature can put you in touch with another human spirit, as a whole, with all its weaknesses and grandeurs, its limitations, its pettinesses, its obsessions, its beliefs; with whatever it finds moving, interesting, exciting, or repugnant…Even in our deepest, most lasting friendships, we never speak so openly as when we face a blank page and address an unknown reader.

Due to the political unrest in Paris, François's lover Myriam moves to Israel with her Jewish family, and Francois finds himself even more emotionally depleted than before. Only when she leaves does he realize he loved her and that life is far more cruel when she's gone. His ennui is more apparent than ever, and the reader shares in Francois's sense of disillusionment as the story progresses.

A bit of a downer, yes, but a highly intelligent and humorous downer that is thought-provoking enough to keep you wanting more. Here are a few more Houellebecq recommendations. I've provided the cover blurbs for each so you can get a sense of them at a glance—nothing quite as titillating as choosing a new book, and we know the blurb is an essential part of that. Like foreplay. Don't miss out on this member of the literati, known as one of the greatest contemporary writers around. 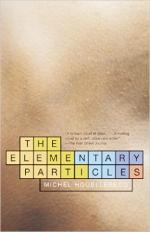 Bruno and Michel are half-brothers abandoned by their mother, an unabashed devotee of the drugged-out free-love world of the sixties. Bruno, the older, has become a raucously promiscuous hedonist himself, while Michel is an emotionally dead molecular biologist wholly immersed in the solitude of his work. Each is ultimately offered a final chance at genuine love, and what unfolds is a brilliantly caustic and unpredictable tale. 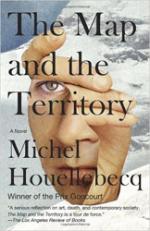 'The Map and the Territory'

Jed Martin is an artist. His first photographs feature Michelin road maps, and global success arrives with his series on professions: portraits of various personalities, including a writer named Houellebecq. Not long afterward, Jed helps a police inspector solve a heinous crime that leaves lasting marks on everyone involved. But after burying his father and growing old himself, Jed also discovers serenity, a deeply moving conclusion to a life of lovers, friends, and family, and filled with hopes, losses, and dreams. 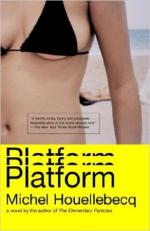 In his early forties, Michel Renault skims through his days with as little human contact as possible. But following his father’s death he takes a group holiday to Thailand where he meets a travel agent—the shyly compelling Valérie—who begins to bring this half-dead man to life with sex of escalating intensity and audacity. Arcing with dreamlike swiftness from Paris to Pattaya Beach and from sex clubs to a terrorist massacre, Platform is a brilliant, apocalyptic masterpiece by a man who is widely regarded as one of the world’s most original and daring writers. 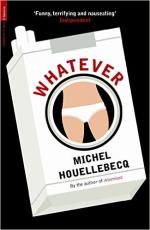 Just thirty, with a well-paid job, depression and no love life, the narrator and anti-hero par excellence of this grim, funny, and clever novel smokes four packs of cigarettes a day and writes weird animal stories in his spare time. A painfully realistic portrayal of the vanishing freedom of a world governed by science and by the empty rituals of daily life.

Have you read Houellebecq? What are your thoughts?

Bookshots: 'The Year of Reading Dangerously' by Andy Miller

Wow. I beg to differ.

"Submission" is about as much a "political satire" as "The Turner Diaries." Houellebecq is a repellent human being and an unrepentant Islamophobe. There's much more to French culture nowadays than a good Cabernet or Louis XIV furniture. France's angry victims of colonialism in Northern Africa have stubbornly refused to go away and leave it alone without consequences, and France seems to be saying -- with Le Pen, Charlie Hebdo, Burquini bans, and Michel Houllebecq -- that it just doesn't care what it did -- f**k the Muslims if they can't take a joke. Only, for "satire" to be a joke, it has to be funny.

No mature person, except for the occasional ignorant Francophile, thinks this book was done in good fun. Like much in France today, "Submission" is a celebration of mean-spiritedness and hate-mongering more in common with the ravings of, say, Pamela Geller.

And, seriously, this worn-out roué can't write for merde.

A few weeks ago I was mystified and disturbed by the story of the woman being physically removed from a French beach because she was wearing a Burqini. Other little stories of face scarf bans etc..have been popping into my consciousness, and as I begin to absorb the depth of the hateful sentiments I am once again looking at something so virulant, that a policeman can put his hands on the body of a young woman because she is covered up on the beach, and people stand by and watch. So, this discussion of the above author piqued my interest.

The romance of the French has always made me a little light headed. Interesting thought today, to realize that just because something is French doesn't mean it is enlightened. I am curious now about this author. Love to hear some more thoughts from others.

Don't listen to what anyone else says - try one of his books. Elementary Particles (known as "Atomised" in England) is probably a good starting point, but I prefer Platform and The Map and the Territory.  He's a misanthrope, a real grumpy old man - he says uncomplimentary things about all kinds of people. I don't agree with some of his opinions, and I wouldn't want someone like him to be in charge of a country, but he's an interesting character and a good writer.

Alright Holly you win. Sold me when you said French author.

I have complicated feelings about the French. Made worse by studying some French murderesses. And all I cam say is I feel nothing but sorry for Anna-Marie Boeglin.