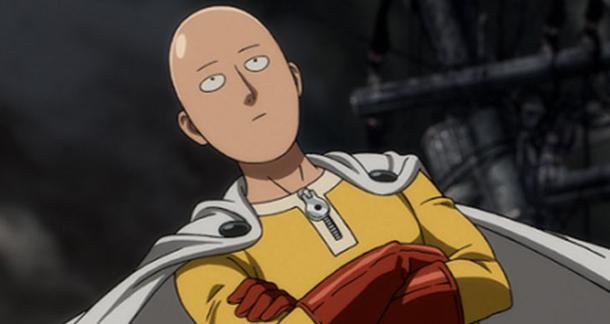 Welcome to Manga for Beginners! I got hooked on manga during the explosion of translated titles in the late '90s/early '00s. My fandom declined over the years, but thanks to One-Punch Man, I'm back with a vengeance. Each month I'll be taking a look at one or more (new-ish) manga to hit the US that you should set you sights on. Got a book you're eager to know more about? Leave a comment and I'll see what I can do. First up? The party responsible for this madness: ONE-PUNCH MAN. 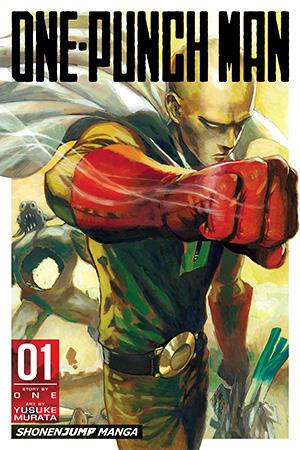 What's this all about?

Meet Saitama: Bald, obsessive deal-seeker/coupon clipper with the power to destroy monsters with one punch, AKA "Someone who's a hero for fun."

The secret to his power? After saving a young boy from a monster, Saitama decided to train to become a hero. Over three years his intense daily regime of push-ups, sit-ups, squats, and running (10 km) produced seemingly unlimited power…with the side effect of his hair falling out. Now he's bald and…bored.

Started as a web comic in 2009 by a writer/artist under the pseudonym One, One-Punch Man eventually went viral, catching the attention of acclaimed manga artist Yusuke Murata, who contacted One with the proposal to redraw the comic. As of this writing there are 11 volumes of the remake, 7 of which have been published in the United States, of which 5 have topped the New York Times Manga Best Sellers of 2016.

One-Punch Man is brilliant in its simplicity. A satire of super heroes and shonen manga (e.g.: Dragon Ball and Naruto, where heavy emphasis is placed on combat and training, and 'powering-up' or a single fight can take up multiple issues, or even entire arcs.) Saitama's training is already complete (to the utter shock and disbelief of everyone around him) and most fights begin and conclude in a single page. The book would be fun and an enjoyable read if it stopped there, but One delves deeper.

The world of One-Punch Man is made up of lettered metropolises (Z-City, A-City, M-City, etc) that are routinely attacked by monsters (measured by threat level), and saved by heroes as part of their duty to the Hero Association. The heroes move up and down through the Association's rankings depending on their heroic deeds, their appeal to the population, etc. But what do they accomplish? What do any heroes/super heroes in comics accomplish? Here's Saitama reflecting in the first book:

The evil running rampant around the world shows no sign of disappearing. It hasn't changed since I became a hero for fun. In other words, I'm having no effect on society.

But he's not necessarily sad about that – what he is sad about is how powerful he's become, and the lack of emotion this had led to:

In exchange for gaining strength, have I lost something important as a human being? Emotions used to swirl within me when I fought fear, impatience, anger…But now…day after day, after one punch, I go home unharmed and wash my gloves. I feel no emotion…as if I'm crushing a mosquito.

Saitama might possess the power of Superman, but he's so quick to dispatch his foes that either no one is around to witness it, or no one believes that he was the hero responsible. And how could he? I mean…look at the guy. 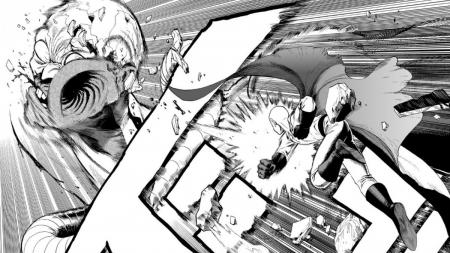 Which also gets us into – What makes a hero? Saitama has performed "heroic deeds," defeating monsters and saving Z-City (and the entire world) from total annihilation on multiple occasions, but no one (aside from his side-kick/student cyborg, Genos) considers him a hero.

Contrast that with one of Saitama's foils, Mumen Rider (license-less rider), a big-spirited bicyclist who never gives up, helping people and taking on any monster with little more than his body armor, regardless of threat. His never-give-up attitude makes him a huge hit with the population. It's his story—the constant underdog—that they fall in love with. Story, not ability, is what makes him a hero in their eyes. We see this in the real-world media all the time, especially when it comes to sports. The exploration of heroism in One-Punch Man is fun, brings a heavy dose of comedy, and is far from over.

Why should I read this?

One-Punch Man is just plain fun. It possesses a hilarious dry-wit, but isn't afraid to get serious either, hitting some very poignant moments, especially in the shorts at the back of several of the volumes (my favorite is in the latest volume (7) as of this writing, where Saitama is arrested by suspicious police for being in a dangerous area by himself…I won't spoil the rest.)

Plus, the first season of the One-Punch Man anime (dubbed) recently hit Cartoon Network (Saturdays, Midnight EST on Toonami) and is just as much fun as the manga.

See you next month as we take on SPORTS!  Yes, SPORTS!