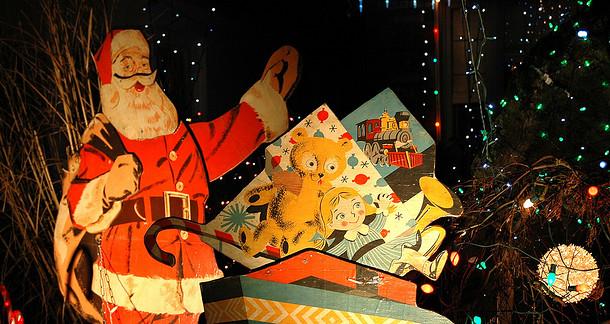 Holiday memories are often tinged with a sense of the surreal, due in part to the strange cast of mythological figures we have come to associate them with. Rational, mentally fit adults will insist that on Christmas Eve of 1987, they really did see Santa’s boots under the crack of a bedroom door. And how can that one Easter be explained, when there were muddy rabbit prints all over the front steps?

These events, forged in early childhood, are not easily forgotten. They are instances of “magical thinking,” a way for the human mind to plug in the gaps when pre-existing knowledge isn’t enough. Needless to say, children have significantly less experience to begin with, and jump to fantastical conclusions far more quickly than most adults. But even with the increased maturity of age, such systems of magical thought are not completely forgone. They may become more socially acceptable than a belief in Saint Nick, but millions of people observe a casual but firm conviction in the reality of aliens, Bigfoot, and countless other supernatural or religious beings that they can neither prove nor touch.

Holidays truly are a time to be treasured, if not for the usual reasons, for the intense emotions and potent symbols they provide us with.

Isn’t That What Crazy People Do?

It would be both condescending and incorrect to assume that there is something “wrong” with magical thought. Throughout the centuries, many of mankind’s greatest mythological sagas have been born of the need to explain incomprehensible events. It is a natural human inclination to find patterns in the chaotic, and it’s a key trait of all writers. What is a story, after all, but a sequence of patterns constructed from a series of real and imagined events that would otherwise never come together?

Psychologist Bruno Bettelheim took this notion somewhat deeper in his classic analysis on the importance of fairy tales, The Uses of Enchantment. Fairy tales, claims Bettelheim, are a way of exploring identity in addition to providing a process by which the internal world of the mind may become externalized and deconstructed. An excellent example of this system of fantastical logic can be found in Negotiating with the Dead, Margaret Atwood’s recollections on childhood and writing. She explains the existence and mythic origins of Santa Claus as thus, finding a logical yet still fantastic place for him in the world that suits an adult’s altered and slightly darker viewpoint:

Santa Claus himself is from the Other Place, disguise it as we may by calling it the North Pole; and anyone from the Other Place—Heaven, Hell, Fairyland, the Underworld—will bring luck to us, or else keep us free from harm, only if given something in return.

(Yes, she means the yearly tithe of Santa's milk and cookies. You don't want to know what happens when Santa doesn't get his cookies.)

Imagination is an undoubtedly useful tool in the real world. The ability to comprehend abstract, intangible concepts is a mark of intellect, and a vital trait for success in not just writing, but entrepreneurship, the sciences, and just about every other “left-brained” career available. As Harvard professor Paul Harris put it, “Whenever you think about the Civil War or the Roman Empire or possibly God, you're using your imagination. The imagination is absolutely vital for contemplating reality, not just those things we take to be mere fantasy.”

The Duel Process of Creation

It’s one thing to seek patterns; our minds are naturally wired to find faces in all manner of inanimate objects. But it’s another thing to turn those patterns into what society can generally recognize as art. Creativity is a notoriously difficult field of study, being both fickle and quite subjective. For the purpose of this article, let us adopt a standardized definition. Creativity, suggests Dr. Alice Flaherty, author of The Midnight Disease, combines both novelty and value. Creativity results of divergent thinking, and is driven— as most human drives are—by the limbic system. Flaherty, however, raises a relevant point:

Admittedly, separating drive and talent is sometimes complicated, because they are so enmeshed. When someone is highly motivated to do something, that person is likely to do it well, and when someone can do something well (especially when it wins praise), the ability to do it often increases the drive to do it.

There are as many theories on what drives human creativity as there are needles on a Christmas tree, but here’s just one to think about: Austrian psychoanalyst Ernst Kris believed that there are two dueling parts of the creative process—a yin and a yang. Both the conscious and preconscious minds are involved. Vibrant imagery triggers the creative impulse, typically from dreams or hallucinations, arising from drugs, fever, or perhaps early childhood. Kris hypothesized that these images have a potent effect on the mind. They remain in the preconscious, an area where they lay just below consciousness, but never far from easy recollection. The secondary process of creation occurs when the conscious mind then steps in as a kind of editor, reframing and analyzing the imagery to form stories and paintings and music.

Christmas, along with many other holidays and festivals, is full of vibrant imagery and sensations. The entire season is a combination of nostalgia, tradition, and color; ideal elements to fuel the primary initiation of the creative process. If there's any truth to Kris' theory, holidays truly are a time to be treasured, if not for the usual reasons, for the intense emotions and potent symbols they provide us with. And for that lingering hope, despite the mounting "adult" logic against it, that those really were Santa's boots beneath the door.