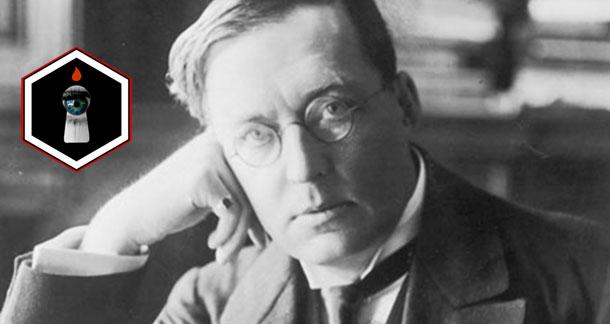 LURID: vivid in shocking detail; sensational, horrible in savagery or violence, or, a guide to the merits of the kind of Bad Books you never want your co-workers to know you're reading.

The stories themselves do not make any very exalted claim. If any of them succeed in causing their readers to feel pleasantly uncomfortable when walking along a solitary road at nightfall, or sitting over a dying fire in the small hours, my purpose in writing them will have been attained.

— from the Preface to Ghost Stories of an Antiquary (1904)

No one puts “Antiquary” on their resume any more, which is a shame.  It’s an occupation that harks back to an era when the quest for knowledge involved expeditions rather than mouse clicks.  Antiquaries were devoted to the pursuit of history they could hold in their hands; dirt sifted for potsherds, stones tracing the outline of a ruined Templar preceptory, carvings depicting the faces of the old gods.  Passionate and obsessive, antiquaries blew entire inheritances on trampling remote valleys in Egypt, or following map fragments through Machu Piccu, or poring over the only existing copy of a prayerbook in a dank German monastery.

Antiquary: A curious critic in old Coins, Stones and Inscriptions, in Worm-eaten Records and ancient Manuscripts, also one that affects and blindly dotes, on Relics, Ruins, old Customs Phrases and Fashions.

Unlike modern historians or archeologists, who use validated theories to illuminate artifacts and events, the antiquary was content simply to uncover mysteries.  Perhaps more akin to today’s conspiracy theorists, their studies focused on the journey rather than the destination. The antiquary relished unraveling conundrums only to reveal enigmas, following trails of evidence into the mists of time, long past the point where concepts such as ‘incontrovertible proof’ or ‘definitive solution’ have any meaning.

As the sun edges ever closer to the solstice and the turning point of the year, a Jamesian ghost story is the perfect, the only acceptable form of entertainment for these dead of winter nights.

The antiquary’s reverence for the mystique of the past, willingness to contemplate the inexplicable, and acceptance of folklore meant that they were often criticized for being obsessed with death and decay, unable to make vital connections between antiquity and the present day.  The academic discipline lacked rigor and substance, and has been superseded by modern history and archeology. Nonetheless, the fiction based on their adventures in the hinterland between the credible and the inconceivable has never been bettered.  Even in the 21st century we still love a good antiquarian yarn – Elizabeth Kostova’s The Historian, or Jonathan Rabb’s The Book of Q (not to mention Dan Brown’s oeuvre) – especially if it includes supernatural elements.

It makes sense that the ghost story should be the antiquarian’s natural milieu, given their affinity for things not quite buried, half-forgotten, laid to unrest. The tumult of the present day represents a continuous overwriting of history.  Every day, everything changes.  We move on, forget, so that things once familiar become inscrutable mysteries. The vivid present fades into the shadowy past; spectral fragments all that remains of robust reality.  We can only see ghosts if we look backwards in time.

Montague Rhodes James (1862-1936) is the acknowledged king of the spooky antiquarian yarn.  A distinguished academic (Provost of King’s College, Cambridge and then Eton) and renowned medieval scholar, he specialized in tales of supernatural mystery. He wrote the rulebook for a generation and his influence as a writer and critic still resonates today.  H. P. Lovecraft hailed him as “a literary weird fictionist of the very first rank”, a reputation he earned with his first collection, Ghost Stories of an Antiquary, and cemented via successive volumes, More Ghost Stories (1911), A Thin Ghost and Others (1919), and A Warning to the Curious and Other Ghost Stories (1925).

James’ tales hinge around the long forgotten, but still extant, the remnant of pre-Reformation English folklore that refuses to relinquish its place in the world.  He writes of entities that won’t fade away, but instead cling stubbornly onto the cold stones of disused wells or inside manuscripts hidden in the darkest library vaults. He was, like so many of his protagonists, a gentleman scholar specializing in medievalism, so the scenarios he sets up have the unmistakable ring of truth, and consequently a greater chill factor.  No one but James could explain, so authoritatively, the origin of three grotesque wooden carvings in The Stalls of Barchester Cathedral — cut from an ancient “Hanging Tree”, the site of long-ago human sacrifice.

James possessed a peculiar understanding of what gives the best spook stories their kick.  The power of his storytelling lies in the meticulous blend of the commonsensical and the supernatural. Like his contemporary Freud, James acknowledged the terrifying power of the Uncanny, that the everyday occurrence, spun ever so slightly off kilter, is much more psychologically disturbing than a fabulous yet obviously fictional rampaging monster.  For maximum impact, James suggests:

the setting should be fairly familiar and the majority of the characters and their talk such as you may meet or hear any day. A ghost story of which the scene is laid in the twelfth or thirteenth century may succeed in being romantic or poetical: it will never put the reader into the position of saying to himself, ‘If I’m not very careful, something of this kind may happen to me!’

While the situation should begin as mundane, the writer should not be reticent about delivering what the genre reader wants as a climax:

At the same time don’t let us be mild and drab. Malevolence and terror, the glare of evil faces, ‘the stony grin of unearthly malice’, pursuing forms in darkness, and ‘long-drawn, distant screams’, are all in place, and so is a modicum of blood, shed with deliberation and carefully husbanded…

It’s a simple enough prescription, but so easy to get wrong if not handled with finesse.  And that’s where James outclasses the competition.  His stories begin in wry observation, in the quandary of choosing a pre-dinner cocktail, for instance, then plunge into murky psychosexual territory, as the protagonist struggles to reconcile haunted dreams with repressed desires, before ending in the gruesome, the enormous grey spiders (“the size of a man's head”) of The Ash Tree, or the cannibal children of Lost Hearts.

James’ stories also revolve around the past rising. In A View From A Hill, an unscrupulous antiquary, Baxter, develops a grisly technique for “looking through dead men’s eyes” in order to see the tragic events they witnessed played out over and over – but he pays a price.  The key lesson James has to teach about history is respect. Some of his tales are cautionary – A Warning To The Curious, The Treasure of Abbot Thomas and Whistle, And I’ll Come To You all deal with the folly of failing to heed warnings, of digging up objects that should remain buried (especially if this involves spelunking down a disused well at midnight).  James believed the ghost story should be retrospective.  Wherever the writer sits in time, the tale should be told with hindsight, but not too much:

The detective story cannot be too much up-to-date: the motor, the telephone, the aeroplane, the newest slang, are all in place there. For the ghost story a slight haze of distance is desirable. ‘Thirty years ago’, ‘Not long before the war’, are very proper openings. If a really remote date be chosen, there is more than one way of bringing the reader in contact with it. The finding of documents about it can be made plausible; or you may begin with your apparition and go back over the years to tell the cause of it…

The winter holidays are the perfect time to sit with a glass of eggnog and a Collected Stories of M.R. James. James was a firm believer in the spooky Yuletide yarn and habitually premiered new tales as a special post-Christmas service treat for his Kings College, Cambridge buddies – as provost of the college, he could be assured of an attentive audience.

…There may be possibilities, too, in the Christmas cracker, if the right people pull it, and if the motto which they find inside has the right message on it…

This custom continues to be honored in the age of electronic communication. A number of James’ stories have been made into short films by the BBC, under the series banner of A Christmas Ghost Story. They were produced as an annual event from 1971 to 1978, and the tradition was successfully revived in 2005.  The latest installment, The Tractate Middoth, adapted by Mark Gatiss (better known to US audiences as Mycroft Holmes in Sherlock), will screen on BBC2 on Christmas Day.  Gatiss, a self-confessed horror nut, has already paid homage with his James-inspired  Christmas 2008 supernatural mini-series, Crooked House, so The Tractate Middoth should be a treat.

As the sun edges ever closer to the solstice (‘sol’ = sun, ‘sistere’ = to stand still) and the turning point of the year, a Jamesian ghost story is the perfect, the only acceptable form of entertainment for these dead of winter nights.  As we look back on the fading specter of 2013, it’s natural to recall the other years that have been and gone, taking people and places with them, hauling them out of the material realm and into memory.  With enough turns of enough years, we all become ghosts.  Perhaps this is why we are so fascinated by tales of dead men walking at the Winter Solstice? In looking back, we also look forward, to the inevitable fate of every living being. In twelve months’ time the sun will return to its lowest point on the ecliptic, ready to rise again as it has done for millennia, but will we still be here?

As a Winter Solstice indulgence,  try one of the BBC Christmas Ghost Stories, presented by Snagfilms for your seasonal delight and delectation.

Whistle, And I'll Come To You

View From A Hill

20 Ghost and Horror Stories for Christmas