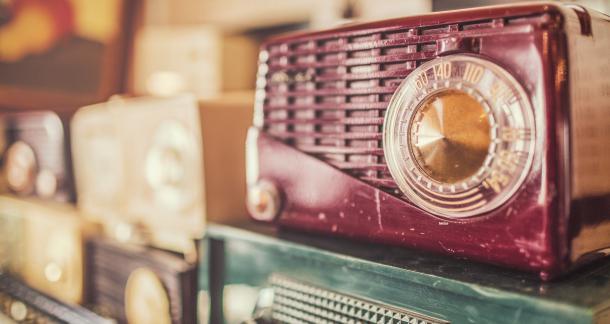 Maybe you’ve never given them much thought before. Maybe you’ve never really paid attention to one. Next time you’re alone, I want you to go sit in the dark next to a radio and slowly swim through the stations. Focus on the static, listen to the messages hiding in the background, desperate to break free. Even in these fits of indecipherable madness, you are not alone. Now change the dial to a man speaking the word of God, listen to the fear and hatred as he spits against the microphone. Change it again, find the lonely—or is that looney?—DJ at the end of the world, pretending to give a shit about rock n’ roll while subliminally pleading for help—anybody's help—before the cosmic wonders of the world eat him up.

Sure, you probably don’t even have a radio. Who has anything like that when there are iPhones and Spotify, right? Well, I want you to explore some of those playlists on your Spotify account—really explore them, dig deep and throw in obscure keywords, see what pops up. But don’t click on the first couple results. Keep scrolling.

What’s out there, hiding, waiting to be discovered?

You ever drive down an empty highway in the middle of the night and browse through the radio stations in search of a voice to keep you company? Anything to help you stay awake, to keep you from drifting off the road and into the trees. You ever wonder where—and when—some of these broadcasts are coming from? Or who they’re talking to? Who they’re really talking to?

Stories are transmissions. You browse through the slush and you have no idea where they’ve come from. They’re just there, waiting to be heard.

The thing about radios is, you can hear what they broadcast, but you can’t see it. And you can’t trust what you can’t see. Sound is an invisible creature slithering into your ears and massaging your brain. It’s all around you, like germs eager to infect. You can look at a radio and listen to the noises emitting from the speakers, but the radio is not the source of the sound. Radios scare me because I can’t see what’s on the other side, but deep down, I know the other side can see me. Radios scare me because the sound from A to B exists in a realm I can never visit, can never completely touch.

Radios scare me because anything could be on the other side, breathing into my world.

You ever watch a movie called Resolution? It’s by the same brilliant duo who created Spring, which I damn-well know you’ve seen, and if you haven’t you need to take a good hard look at your life. But Resolution, this movie’s about two friends secluded in a cabin in the woods. One guy’s a heroin junkie and the other friend has him chained up, trying to get him to quit cold-turkey. During this DIY rehab, they discover various strange audio and visual recordings. Sometimes these recordings are of them, in the future and the past—only these pasts seem be slightly different than what they remember. Sometimes these recordings are of them dying. Obviously, many questions come to life as the story progresses—such as who is leaving these recordings for them to find, and how the hell are these recordings even being made in the first place?

Recordings scare me because you should already know what’s on them, but what if you’re wrong?

What if a recording decides to change its content?

What if a recording creates its own past—its own future?

After watching Resolution, I got to thinking about how so many of my favorite works of horror involve radiotelegraphy in some way. Lords of Salem, Welcome to Night Vale, Pontypool, Gateways to Abomination, Alice isn't Dead, and so on. I started thinking about how badly I wanted to write a horror-themed short story, but after examining a few ideas, I came to the conclusion that I just wanted to read more stories under the same theme, which blossomed into the idea to post an open call for an anthology.

I’d create my own anthology and call it Lost Signals.

And that’s exactly what I did. It took a little over a year, but Lost Signals is officially available. After hundreds of submissions and hours and hours and hours and motherfucking hours of editing, the book is done. Nearly 400 pages of content, all following a radiotelegraphy theme. Stories by Matthew M. Bartlett and Tony Burgess (author of Pontypool!) and Damien Angelica Walters and Josh friggin’ Malerman and so, so many others. Each story creepier and weirder than the last.

There’s something magical about radios and broadcasts, something scary and amazing and beautiful. It’s almost like a secret formula for the Weird. Throw in some creepy transmissions and you immediately have an advantage over anything else out in the wild.

In 1926 Weird Tales published one of its most famous stories, a little gem by the title of “The Night Wire”. With similarities to Carpenter’s The Fog and King’s The Mist, “The Night Wire” follows two radio operators working the night shift as they receive reports of a strange, massive fog swallowing a town they’ve never even heard of before.

Obviously I reprinted it in Lost Signals.

Where do they come from? Where are they going?

Do we ever really know?

Or are we all lost signals, waiting to be found?

This was interesting and different, in a good way.