Looking Back: The 2017 One Story Per Week Writing Challenge 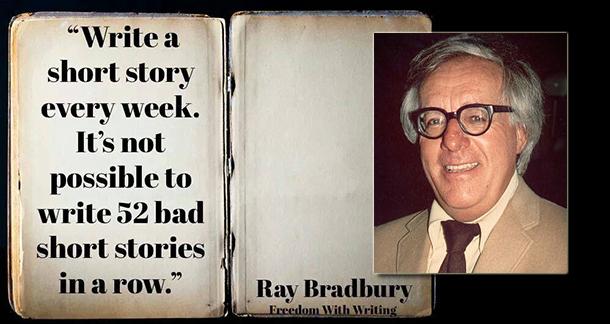 Last year I wrote about the 2017 One Story Per Week Writing Challenge and hosted an online writing group and support network for participants. One year on and 2017 was a hell of a ride. Some participants managed to write 52 stories in 2017, whereas others (present company included) didn’t quite hit that gold standard. Still, we all learned so much about ourselves and our writing.

I wrote 25 stories last year including two novellas, one of which was co-written with Bob Pastorella. In addition to this, I wrote 30,000 words of a novel and six extracts (17,500 words) as ‘Martin,’ a neurotic teacher who has haunted me since I was at University and turns up every few years. Whilst I do not have a record of exactly how many words I wrote last year (considering the words exhausted on numerous drafts, plans for written and unwritten stories, character studies, etc.) the total word count for all stories in their current draft is 173,909, which breaks down to around 14,500 per month, 3,334 per week, and just shy of 500 per day.

Not only did I learn many new lessons, but many past lessons were reinforced. Here are just a few of my key takeaways.

I wrote a great deal more fiction in 2017 than I have ever written in a single year previous. I showed my work to far more people, too, and gained increased confidence in my own ability as a writer. I said going into 2017 that I had to write more, that I had to improve, that the time for talk was over—it was all about the action, the writing. I achieved what I wanted to.

Perhaps the biggest challenge was truly believing the purpose of the goal was more meaningful than the goal itself. I’m competitive. I like to set myself ridiculous challenges and ‘win.’ I had to constantly remind myself that it was better to write the stories I wanted to write than to simply write 52 stories. Though logically it made sense—it would have been better to write just one good story than 52 passionless stories for the sake of meeting an arbitrary goal.

That said, as the host of the One Story Per Week Writing Challenge, there were times when I felt like I would be a failure and a let-down if I didn’t write 52 stories, but I had to remind myself of the spirit of the goal and that, whatever happened, 2017 was—hands-down—my most productive year as a fiction writer.

I invited each participant in the One Story Per Week Challenge to answer a series of questions regarding their own experiences (keep an eye out for a future post on the Michael David Wilson blog with full answers). Here are some of the key takeaways.

“I learned that finding time to write and combatting procrastination is on me. There is always time to write, but only if you put your force of will into it, and that is hard. But if you want it, you'll do it.”—Kev Harrison (33 stories)

“I learned that if I put my mind to it and really push myself, I can output way more than I realize.”—Hillary Dodge (35 stories)

“The best things [about the challenge] were the chance to connect with other writers, and also to test my mettle and stretch myself as a writer.”—CC Adams (52 stories)

“The best thing to come out of the challenge for me was connecting with other writers and going through the process of beta reading and being beta read. Writing seems like a solitary pursuit but it doesn't have to be and everyone can benefit from constructive criticism.”—Travis Earl (52 stories)

Finding Your Voice and Routine

“The challenge helped me find my voice and the style of fiction I write, it’s different to what I imagined. It also made me realise that the more you write the more ideas you’ll get, but not every one of those is good or will work. I’m less precious about every word I write.”—Grant Longstaff (27 stories)

“I've been able to make writing as much of my daily routine as eating breakfast—it's simply something that I do, and after years of not writing for various bullshit reasons I've figured out how to do it regularly. I don't really look at a day as being a good one if I've not done any writing, even a few hundred words.”—Brian Asman (52 stories)

“I had to remind myself a few times throughout the year that some/many of these pieces/stories didn't need to be perfect and that you could view them just as a sketch for something else like how visual artists might … Like, I don't sit down on the guitar and get annoyed at myself for only noodling about for a bit. That’s usually where songs/riffs/sweet, sweet licks come from. So if I ‘waste’ some time writing a bunch of words that don't turn into what I expected it’s probably not been a total loss.”—Jonathan Cosgrove (35 stories)

“I learned a lot about making room in my day for writing. I've never been a ‘write every day’ writer, but I came closer to that this past year. At first, I didn't think I'd use a lot of what I was writing when I forced myself to sit down when I didn't want to—when I didn't like the words that were coming to me. But here we are four days in to 2018 and I'm already cannibalizing several thousand of those throw-away words into other things. Every piece is useful in ways you might not suspect, I think. Like using every piece of an animal.”—Sarah Read (46 stories)

How was your writing year in 2017? I’d love for you to answer the (slightly modified) questions I asked One Story Per Week Challenge participants.

See you in the comments.

The 2017 One Story Per Week Writing Challenge

Dino Parenti from Los Angeles is reading Everything He Gets His Hands On January 12, 2018 - 9:52am

How many stories did you write?  Only two, but I also in the home stretch of finishing my first novel. All total, I'd say I turned out about 160,000 words.


What did you learn? That I can write a novel in under a year. This gave me a ton of confidence moving onto book 2.


What were your biggest achievements?  Learning what my voice is. I can see it now, either in short or long form.


What were your biggest challenges and toughest obstacles? Having to balance making enough money to survive on while finding the time to write. Mornings are my go-to writing time.