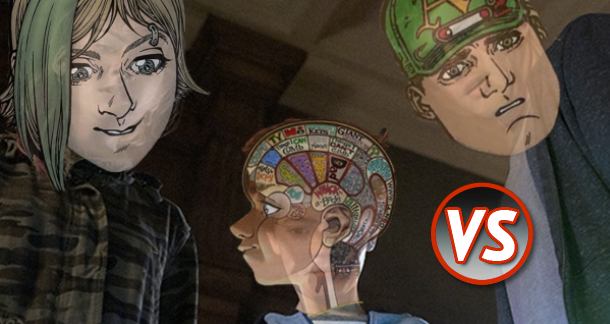 I’m not surprising the world by saying, “The book is better.”

I know this is not mind-blowing news, but in this case it’s news you need to hear. Not because the series of comics by Joe Hill is better, but because the comics are MUCH better. And because so many plot points carried over in the show, you really can’t watch the show first, then read the book. If you watch the show, you’ll ruin the much better experience of the book.

I can only hope I’m not too late, but even if it is too late, or even if you’ve got no interest in Locke & Key or Locke & Key, you’ll recognize some of the issues that came up in the translation from book to movie on this one.

Very minor spoilers for the show lie ahead, sticking to the level of basic premise.

Decompression isn’t about long or short. Decompression is when a series doesn’t get a whole lot done in an episode. Lost might be one of the first shows where the average viewer felt this hard. In an entire episode, maybe one thing would happen. Just enough to bring you back a week later.

Things that are well-paced do one of two things (and sometimes both) with every scene: raise the tension and/or advance the plot. Things that are decompressed accomplish those things, but they do it episode-by-episode as opposed to scene-by-scene, because they don’t have enough story to fill the time.

Writers know different stories have different optimal lengths. Producers of shows think of stories like goldfish: they’ll expand to fit whatever size container is needed. But rather than adding interesting or novel story elements, they take the existing elements and expand them, making the story less dense, or “decompressed.”

Locke & Key the show is decompressed as all hell. There’s a lot of backtracking and a lot of sideways diversions that aren’t necessary. The comics handle it better. They tell the story in the appropriate amount of time and at the appropriate pace. 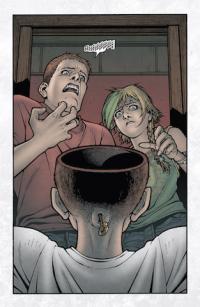 The Back and Forth Problem

Let’s say that you discovered magic was absolutely real. Let’s say this came in the form of moving into a new house and hearing whispers, which you could then follow to find keys. Each of these keys did magical things. For example, maybe a key could turn a regular doorway into a portal to anywhere there’s another door. Like, you could walk through a door and be in Delaware. You could move all your stuff through a doorway and into your new house several states away.

If you discovered this key, and if you knew for a fact there were more keys with unknown powers hidden throughout your new home, what would you spend your time doing?

Did any of you answer by saying you’d hang out with nerds who want to make a horror movie? How about being on the hockey team? Would you devote one second of your time to red Solo cup parties? Fitting in at a new school? Helping sign people up for a 5K?

This family discovers real true magic, and while they’re excited in the moment, the next morning they all go back to being worried about high school or being popular or whatever. This happens over and over and over. Every discovery of magic should raise the tension tide, but instead a wave of tension comes in, then it goes out completely. No overall, lasting increase.

The problem isn’t so much the family’s unrealistic reaction. It’s the back and forth for the viewer that derails the whole thing.

Look, imagine you had a social problem, someone at work being passive aggressive. Then someone broke into your house and tried to kill you with a tire iron. If you have to tell both stories, which order do you tell them in? Exactly. Because once you talk about someone trying to kill you, Tammy never cleaning out the Keurig ain’t gonna take you very far. You can't go back to that story.

The comics are better about raising tension and establishing a new baseline rather than deflating the tension and starting from scratch with every event.

There are 10 episodes of the show and only 6 volumes of the comics. Even if you’re not a speedy comics reader, you’d probably plow through the comics faster than you’d watch the show. So...why?

We all know that the book is a richer, deeper experience, and that’s true of Locke & Key. What makes this case unique is that you could get that deeper experience in less time than it’d take you to have the worse experience. It’s like driving past Disney World to ride the Gravitron at a shitty parking lot carnival. You’re putting in a greater effort to have less fun.

There’s a satisfaction in being one step ahead of characters, but being miles ahead is just tedious. The Locke & Key show makes it very clear to the viewer where things are headed way too early.

It’s the viewer discovering the horrible situation just barely ahead of a character that makes things interesting. Take Alien. If we saw the facehugger crawl into that weird egg before the space miners got to the planet’s surface, we’d have a long wait for an event that we already saw coming. The way it plays out in the movie, we know the egg is not good news, it opens, and we’re like, “Nope, nope, nope,” and it’s a short wait for that thing to pop out and confirm what we all knew.

The viewer puts the pieces together or is straight-up told what’s going to happen way too early in Locke & Key on Netflix. The comics do a better job of piecing out information for characters and readers at a matched pace, creating surprise instead of tedium.

I can give anyone a pass on the Thor comics. I don’t think people should read Journey Into Mystery before they see Ragnarok. It’s like bleaching your butthole: Not necessary, not fun, not even a good idea.

Locke & Key is a short, limited comics series. It’s contemporary. The art is excellent. The writing is tight. There’s absolutely nothing to know before you start, no background, no long character histories, no Weapon X project, nothing. You get in, you get out. Most libraries have them, often available on digital platforms for free checkout.

This is a great series to try out comics if you’ve been meaning to, or even if you haven’t.

For fuck’s sake, read a book once in a while.