Welcome to LitReactor's Flash Fiction Smackdown, a monthly bout of writing prowess. For this edition, we are going to alter the rules a bit to keep it fresh. You now get 25 words and 2 sentences.

We give you inspiration in the form of a picture, poem, video, or similar. You write a flash fiction piece, using the inspiration we gave you. Put your entry in the comments section. One winner will be picked and awarded a prize.

Max Allan Collins' book Seduction of the Innocent. Here's a bit more about it: 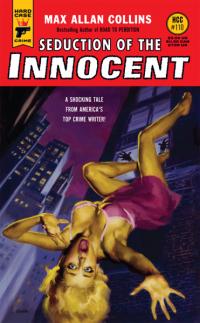 It’s 1954, and a rabble-rousing social critic has declared war on comic books – especially the scary, gory, bloody sort published by the bad boys of the industry, EF Comics. But on the way to a Senate hearing on whether these depraved publications should be banned, the would-be censor meets a violent end of his own – leaving his opponents in hot water.

Can Jack Starr, private eye to the funny-book industry, and his beautiful boss Maggie unravel the secret of Dr. Frederick’s gruesome demise?  Or will the crackdown come, falling like an executioner’s axe…?

A hardboiled detective novel inspired by the 1950s witch-hunt against crime and horror comic books.  Written by best-selling novelist Max Allan Collins (author of Road to Perdition and long-time scripter of the Dick Tracy newspaper comic strip) and featuring 16 pages of interior illustrations by comic-book artist Terry Beatty (Batman, The Phantom),SEDUCTION OF THE INNOCENT tells the story of comic book industry troubleshooter Jack Starr and his investigation into the death of a moralizing crusader out to get violent comics banned.

The book was inspired in part by the real-life crusade of Dr. Fredric Wertham, who in 1954 published a non-fiction book also titled Seduction of the Innocent in which he accused comic books – especially violent ones such as those put out by Tales from the Cryptpublisher EC Comics – of corrupting America’s innocent youth. And the winner is...Strange Photon!

Strange Photon squeaked in just at the 25-word limit by using sonofabitch and Goddamnit as single words—and it worked! I like that he didn't interpret the inspirational photo literally, but rather followed it down the tangent a bit first so that it only appears in the single, non-literal use of the word bird. I also like that the Grandma scolds the "sonofabitch" for unsafe driving while simultaneously ordering her driver to pull a similarly dangerous stunt. That's the kind of Grandma I'd like to be someday...

"Goddamnit, Kris, that sonofabitch nearly ran us off the road — get alongside and I'll flip him the bird." Grandma always had a way with words.

Jacob said he worried about his wife flying to Guatemala for another Tarot reading, because as a child he was exorcised. I prayed; heard orange.

You may walk and be driven forever onward,
or stand firm and speak only as you are spoken to.
The rod cannot choose for you.

It was like fire, sunburst orange and chimney red. Then she went numb, a scream erupted from her throat: WHO WANTS TO SEE MY TITS!

“If you run by that tree where Birds of Paradise nest, you’ll get shat on.”
It was funny in Papua, but in Manhattan she cries.

He searched the world over with the help of a box of circuitry. He found flamingo feathers in Tampa, Florida, taken with a Samsung camera.

The Death of Daylight

"I could've done that," the woman with the peacock-feather shawl said of the painting's joyous, sun-bright streaks. Overhearing, the veteran artist turned away in tears.

Blank and Pitiless as the Sun

As agreed, at 12:00 PM (UTC/GMT) all worldwide media terminated broadcast. I drank the last of the vodka and shot the flamingo because I could.

First thing I noticed when I came to was how black her blue eyes looked. Second was the dried vomit on her fluffy pink pillow.

SamaLamaWama from Dallas is reading Something Wicked This Way Comes March 5, 2013 - 3:41pm

Under the microscope, it didn’t look so bad. It looked luxuriant and soft—nothing like the insidious microorganism that would end mankind.

John's wife always hated the lawn flamingo so it stayed in the garage. So he rushed into the burning house to save it.

Orange is my summer and my sun has feathers. The silence errupts from me.

I don't know why, my post appeared twice when I tried submitting it. Sorry for the inconvenience.

With a roll of her shoulder, she bared her soul. Vegas was the last card she had left to play.

Orange-exotic plumage rustled relentlessly as the headdress cavorted in exaltation. The tribe-elder presented sacrifice to the spirits as fire seared the visitors’ flesh.

The Word For The Bird

They were dressed in alluring costumes adorned with feathers and rouge; angelically danced around open fire, with eyes that could not see.

Peering in to the bird enclosure she sighed, "I just love pink flamingos."

My brain on autopilot, I asked, "The film with the singing asshole?"

"I'm sorry your head still hurts." Quietly returning the feather to the nightstand, I rolled over and thought maybe another night, but I knew better.

Devon Robbins from Utah is reading The Least Of My Scars by Stephen Graham Jones March 9, 2013 - 3:40pm

The flame's wings stretch wide over the photograph, disolving us between its feathers. And I watch, eyes stoic, savoring the taste of passionfruit and lemon.

Miss Moxy Meow's red lipstick left murderous streaks on everything like a Mark of Zorro. But darling, it was the feathers that made her fly.

Two addicted hobos pummel each other bloody over a dollar, snapping their bones, rending their skin, my heart. A pleased spectator says, “Worth every penny.”

Kentucky Fried
The colonel always knew this day would come. Staring up at the vengeful chicken, all he could do was lay back and think of Kentucky.

Squawks our golden peacock-god lives! Let us light the altar and hear our sacrifice scream unto him.

Back at the lab

The ornithologist returned from the forest. Now, he wonders if the feather sample is really burnt-orange or if it's just his jungle fever hallucination.

I’m so sick of entering writing contests with obscure inspirational image prompts, she pouted. “Yeah, like you’d win anyway,” her ex-husband said with a snort.

"Goddamnit, Kris, that sonofabitch nearly ran us off the road - get alongside and I'll flip him the bird." Grandma always had a way with words.

After slaughtering the angel, they cut out the mouth that terrified and the eyes that judged. But they kept the wings; they liked the wings.

A Hunting We Will Go

Feathers rained from the sky as the lifeless body of Mabel’s beloved parakeet hit the ground. “She said to find a hobby,” Alex scoffed.

"Of course it was for money, sir. A soft boa an' tiny shoes an' i'm makin' a mess a myself quick like!"

Simone Bellenoit from Massachusetts is reading Bone In The Throat March 26, 2013 - 6:12pm

The driver playfully tugged at the orange boa around the prostitute's neck as she laughed - Little did he know, the woman's name was actually George.

Good on you SP.

PS I love my Grandma.

Congratulations, Strange Photon! Lots of good ones this month!

Strange Photon from Fort Wayne, IN is reading Laurie Anderson lyrics April 1, 2013 - 4:34am

Thanks, Taylor, and thanks, everyone for the congrats!

I totally agree with C Pat, there were so many excellent submissions this time around that I had no illusions I'd win, I just wanted to make a tribute to my grandparents. So, you can imagine my delighted shock when I found out mine was chosen as the winning submission. THANKS!!!