The internet is full of mash-ups, but the bookshelves are not. Enter LitReactor's own, Joshua Chaplinsky. Somewhere in between his day job and harassing tardy columnists about getting their shit in on time, Josh had the time to re-write H.P. Lovecraft's classic horror story, Herbert West - Reanimator, starring Kanye West! No, really, HE DID. It's called—wait for it—

Of Kanye West, who was my friend in college and after he dropped out, I can speak only with extreme sadness...

So begins this epic cautionary tale of ambition and hubris. A bizarre mix of Lovecraft and hip-hop history, Kanye West—Reanimator reimagines the classic story "Herbert West—Reanimator" with everyone's favorite petulant genius cast in the titular role. In it, Kanye West attempts to reanimate a moribund hip-hop scene, only to come to the conclusion that his music is so powerful, it should be used to reanimate the dead. And who better to reanimate than those two legendary titans gone before their time—Biggie and Tupac? Hilarity and carnage ensue.

Two winners of this month's contest get a limited edition t-shirt of the modern day Narcissus bringing Hip Hop back to life, courtesy of Sam McCanna and SkurvyInk.com. Check out their website for tons of bizarro related shirts from your favorite authors. You know you want to. 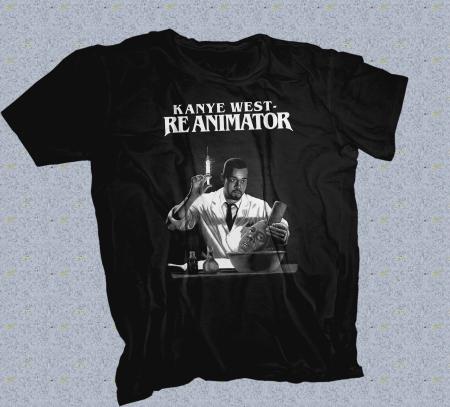 Welp, Josh gone done it: He brought Kanye West AND H.P. Lovecraft back to life. (What's that you say? Yeezus Lives? Well, I'll be darn-tootin'!) And I can't come up with anything wackier than that, so let's ride this pony all the way to the barn.

Give us your best 30-word flash fiction story that mashes up classic horror and hip hop. Josh will be the judge this time, so it'd better be good.

And the Winners Are...Joe Golden & Thuggish

[JOSH HAS SPOKEN] (imagine that is a booming God voice), and he thinks these two entrants are worthy of a KW: Reanimator shirt. I wholeheartedly agree.

I'm a monster in the bedroom;

One look from me, and you'll be doomed.

My bite will end your life so tragically,

But girl, I'll grant you immortality.

Congrats, guys. Wear them with pride!

What Happens in the Beat Lab...

Dr. Dre dropped an ice cube into his crunk juice and
mixed it a lot. He secured himself with two chains.
Soon he would become the notorious Mr. Mathers.


Eazy-E drops the body
Ad-Rock drops the beat
Cube drops the hammer
D’s got the street
Dr. Dre’s got the knowledge
MCA’s got the soul
Bonham’s resurrected
Cue the drumroll

"Do you actually kill people when you say you do in your records?"

Shit, I don't know. I only remember that I've blacked out again.

Unholy worship, God of the light in the dark.

Cadavers Rule Everything Around Me

“There is method, man, to this madness!” he bellowed, as the professor zapped the corpse of the old, dirty bastard again.  “How can he stay dead if Wu-Tang is forever?”

"You go on in two."
"I'll be ready, just one minute."
The door is shut. A small man draped in an oversized tee uncaps a dark vile.
"One last show."

I'm a monster in the bedroom;

One look from me, and you'll be doomed.

My bite will end your life so tragically,

But girl, I'll grant you immortality.

Once Upon A Time in Suburbia

There was a little girl that didn't want to wear pink, didn't want to be a princess. Then one magical day Spin-da-rella came into her life and brought her friends Salt'N'Peppa.

"Jeez, what happened to you?" Said God.