We give you inspiration in the form of a picture, poem, video, or similar. You write a flash fiction piece using the inspiration we gave you. Put your entry in the comments section. One winner will be picked and awarded a prize.

We are switching things up just a tiny bit from here on out. We, luckily, get entries from writers living all over the world! Brazil, Australia, Mongolia, the UK, Germany, South Africa—to name just a few. Unfortunately, the cost of mailing the prize to a winner living overseas is WAY more than the prize is worth. So, we've worked out a sweet deal with Titan Books to offer an eBook prize for every contest so that we can continue to include non-US/Canada entrants in our contest. Each month Titan will offer an electronic book as a prize that can be sent to overseas winners. We will still have the cool rotation of cool books dug up by our editors that can be mailed to US/Canada winners.

This month, Titan is offering an eBook version of Alien - Sea of Sorrows, an original novel by James A. Moore based on the movies from 20th Century Fox.

As a deputy commissioner for the ICC, Alan Decker’s job is to make sure the settlements on LV178 follow all the rules, keeping the colonists safe. But the planet known as New Galveston holds secrets, lurking deep beneath the toxic sands dubbed the Sea of Sorrows.

The Weyland-Yutani Corporation has secrets of its own, as Decker discovers when he is forced to join a team of mercenaries sent to investigate an ancient excavation. Somewhere in that long-forgotten dig lies the thing the company wants most in the universe—a living Xenomorph.

Decker doesn’t understand why they need him, until his own past comes back to haunt him. Centuries ago, his ancestor fought the Aliens, launching a bloody vendetta that was never satisfied. That was when the creatures swore revenge on the Destroyer…Ellen Ripley.

A direct follow-up to ALIEN: OUT OF THE SHADOWS, this adventure reveals the far-reaching impact of events seen in that novel. It shows the continuing malevolent influence of the Weyland-Yutani Corporation, and their inexorable efforts to weaponize the Xenomorph known as the Alien. 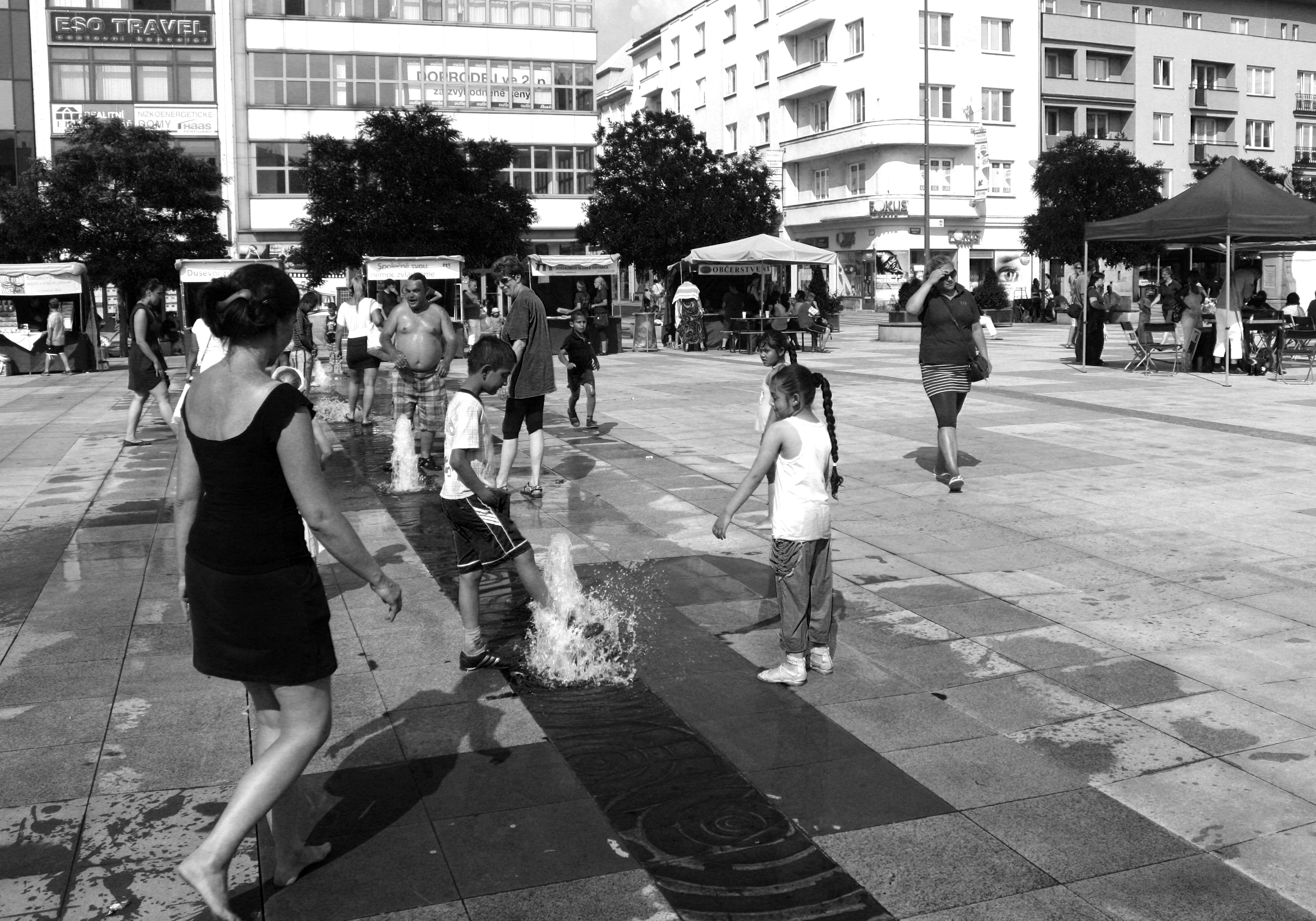 Photo used with permission: "Hot in the City" by Pavel Petros.

And the winner is...Damon Lytton

As usual, you all made this a hard choice for me, so I enlisted the help of Pavel Petros, the photographer who provided the inspiration for this contest. Pavel said Damon's entry "grabbed [his] attention immediately," and I have to agree. I love that he picked a character in the photo that appears in the background, but who is definitely an interesting subject. Well done, Damon!

My Dad was blind to shame, his bare belly hanging over plaid shorts. Yet I felt it so strongly I couldn't stand next to him.

Skygrotto from Southwestern Ontario is reading Europe: A History by Norman Davies August 2, 2014 - 10:42am

No person escaping the heat by playing in water at desginated city parks believed the sun had gone supernova. Until temperatures reached 60C.

Susan Mulligan from Salem, MA is reading Rogues, The Way of Kings, Unfettered, On Writing August 4, 2014 - 11:07am
Summer Solace


Blazing sun sears through black mesh, binding my feet in fire, torching toes and soles until blue cool bubbles through, bathing my soul in bliss.

My Dad was blind to shame, his bare belly hanging over plaid shorts.  Yet I felt it so strongly I couldn't stand next to him.

Marco kicked at the water, observing more than playing.  Ever since the color left the world even the simple things were new and exciting again.

Why do I come here everyday?
Why do I endure the struggle?
I want to resist but they’re just so appealing when they’re all wet...

I flipped off my high heels and joined my children in the fountains one last time, even though I knew my dress would get ruined.

Born by the sun, killed by the cloud.

Is it they who lead us on our journey or us who leads them?

In Pursuit of Shadows

Sandra crossed the square, hand covering her face. That was the signal. I grabbed the suitcase and receded into the building.

High Noon in the Square

The fountain churned and foamed between them, the adulterers. A Meursaultian rage seething within, he witnessed their kiss. The sun shone unforgivingly.  Children laughed.

On Sundays, Walter's killer and Walter's widow visit him in the park, bare toes splashing in the concrete pool, inches above his eternally startled face.

Henry's watching his friends splashing in the fountain outside.

That Day in August

What's that? Stop. Kids screaming, feet in the fountain. Her face, mine. Impossible.  So far from where I gave her up.

They can’t see me.
I see Jessica.
She sees me no more.
First the color faded.
Soon I will too.
My soul departs.
Goodbye world.