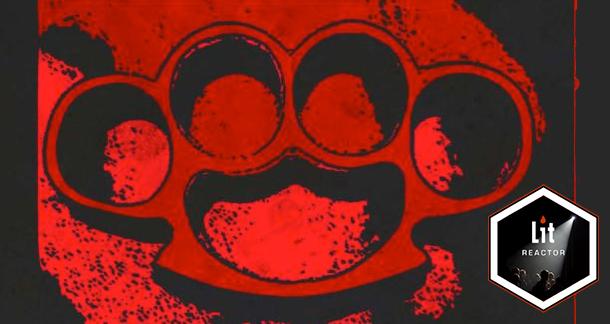 Good gravy, it's December. That means I've been doing this job for a year and a half now, since my first column (and roughly the time that I started working as the community manager) was back in May of 2014. I've grown, like, eight shoe sizes since then.

Some things have changed. Some thing haven't. Some things are working great, and others still need work. I hope I've been doing a good job and representing you guys to the best of my ability. I hope you guys are feeling heard when you want to be heard, and see things happen when you think things should happen. This role has actually been much more intensive than I thought it would be when I've signed up, but you people have been great to work with, and I've enjoyed every minute of it.

I'm looking forward to 2016 here at LitReactor, because I finally have known most of your usernames long enough to see you make progress in your writing goals and accomplishments. Some of you were already experienced and churned out even more awesome work, while others are just beginning to break the surface of the literary world and have a lot of great things you're ready to show us. I get excited to see both new and old names in my inbox for the Spotlight submissions, and am running out of witty things to say about certain people. That's not a bad problem to have.

For me, 2016 is going to be a year of new living arrangements, new degrees, new jobs, and fingers crossed, new writing. What's it going to be for you?

As I announced earlier, the staff came to the decision to revert the Writer's Workshop point system to it's previous point breakdown for reviews. The system is now as follows:

I was one of the ones who pushed for the first change to a higher point-payout, with hopes that it would ignite some fire in the workshop. And on that front, it was totally successful. The problem was that the submissions were now coming in so quickly that less prolific writers were getting buried in the pile, while at the same time each submission was on the front page for less time and generally received less reviews. This led to some hurt feelings and tension between community members regarding the proper etiquette for dealing with the increased volume. Of course, nobody was at fault for the issue; it was just a learning experience, and we've now learned.

I've also learned I look fantastic in pretty much any hat. Just as an aside.

Based on your feedback, I asked if we could change it back, and we have. As I've said, this doesn't mean that I'm done trying to improve the workshop experience; we have a few different ideas we're juggling right now, and we'd love to hear your thoughts and suggestions. In the meantime, I hope any relationships that were strained by this can get some of their buoyancy back, and remember that if you guys have issues with another member, I'm more than happy to help mediate and come up with solutions. I'm happy that we've maintained a fairly drama-free community here, and I always appreciate your help in trying to keep it that way.

When in doubt, cut the comma and use a new sentence.

When you are really stuck, fall back on an old acid trip... Or any experience I suppose!

It's good to have some sort of core philosophical tenants, even if you must avoid didacticism in order to find a less intrusive way to explore it.

Have you checked out the LitReactor Book Club yet? Every month we start discussion on a new book, often by authors and publishers that have some affiliation with LitReactor. Discussion on Sweet Nothing: Stories by Richard Lange has already begun, so if you've read it, chime in. If you didn't make it this time around, don't worry; January's selection will be announced soon. Check it out! The Book Club is a great place to get to know our members and become involved in the community.

One of the earliest issues I recognized in my own writing was the difficulty in developing real, breathing characters. Oftentimes, my characters would be cardboard caricatures that possessed a single trait I needed, and I would drag them through the story like a kid playing with dolls, making their blank, emotionless faces pretend to say words while I shook them back and forth. Why can't creating fictional human beings be as easy and entertaining as creating real ones? This thread discusses some techniques we've used to spark some life into the characters we write, so feel free to add your voice or absorb the knowledge of those who've got a system already in place.

It's been a while since I plugged my own thread, but since it's remained popular since its creation, I figured I'd bring some of the new folks in on the secret. The Game of Threes was a little writing exercise I came up with that involves writing a piece of microfiction based on a prompt provided by the previous writer. The prompt must be only three words long, and the story must be roughly three paragraphs long (with some flexibility to allow for dialogued or poetry). The goal is to help develop interesting, concise stories without too much thinking or planning. We've had a lot of participation from many different users, and it's a great way to test out new writing styles and subjects without too much initial commitment. Give it a try and see what happens.

"Letters to the Purple Satin Killer" by Joshua Chaplinsky

Man, I'm getting all teary. Starting in May, Joshua really started putting himself out there, both as a writer and as a man who loves chickens. He's better known for the former, more notorious for the latter. In any case, he's been vigilant about keeping us updated on how quickly someone goes from their first publication to making it big in the news (again, for the writing, not the chickens), and it's been my happy job to keep you all updated on every step.

He's finishing the year strong with one of his stories being published in a LitReactor friend and favorite, Thuglit. The story is titled, "Letters to the Purple Satin Killer," and, true to its title, it's written as a series of letters to a serial killer. Joshua's had an enviable number of short stories published recently in some top-shelf venues, and at this rate, I fully expect to see a Chaplinksy Presidential announcement here any day now.

Joshua Chaplinsky is the Managing Editor of LitReactor. He has also written for TwitchFilm and ChuckPalahniuk.net. He is the author of Kanye West—Reanimator. His short fiction has appeared in Zetetic, Motherboard, Dark Moon Digest, L’allure des Mots, Pantheon Magazine, Fabula Argentea, Thuglit and Crack the Spine. More info at joshuachaplinsky.com.

Alright, Nathan, your excuses are done. You're finished moving, you're done with this semester of classes, and you finally got that creativity-draining brain slug surgically removed from deep inside your eye socket (he was a fighter). You need to start writing again.

And so do you, dear reader. If you're anything like me, you start to slow down a bit toward the end of the year as the many deadlines around this time start to pile up, what with the holidays and finals and brain slugs. 2016 will be a new year, and all those ideas you've had mentally marinating are now soggy and delicious and ready to be put to paper.

Enjoy your holidays, and come back swinging. We'll be ready for you.