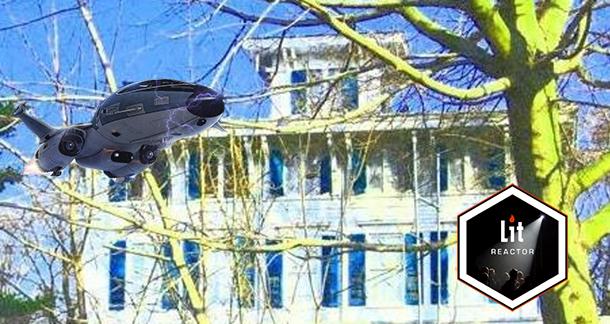 I've been thinking a lot about perspective. If you've been following politics in the US this election cycle, you probably have too. Conflict is easier for an individual to manage from a limited perspective; you can name a thousand and one reasons why your side is correct, and why the opponent is wrong. From an individual perspective, every fight is a virtuous one.

When I think back on all the stories that I've read and watched, it seems that, with a few exceptions, the popularity of the limited perspective has carried over into contemporary fiction. Whoever we're reading about is the good guy, and from his perspective, we can easily identify bad guys, important clues, and so forth. A reader can easily empathize with a character and adapt to the stakes that character faces.

We are each the main character in our own story, and by following a limited perspective, we create something that's intrinsically familiar.

For a long time, I was uncomfortable with omniscience in storytelling. I felt that it was lazy, and that it encouraged telling rather than showing. I'm not the only one who felt this way. I've seen writers discourage others from omniscience multiple times in workshopping sessions, and for the most part, that advice was taken as sage wisdom. But I think there's more to it than that.

Look at some of the more popular stories that have been released in the last couple of decades. Larrson's Girl with the Dragon Tattoo series has little allegiance to one point of view, and the most popular character in the series spends a great deal of time in a hospital throughout the trilogy, leaving us plenty of time to get inside the heads of everyone who wanted to destroy her. Game of Thrones has enjoyed massive popularity, despite many of us needing to keep notes in order to track what's going on. Some of the older myths of human civilization, such as the Iliad, not only follow the (barely) heroic Achilles, but also the sympathetic Trojans, the adult in the room, Odysseus, and even the machinations of the gods themselves.

As I thought about it, I realize what a challenge it must have been to write stories with an omniscient point of view. When you use omniscience to watch the villain evilly cackling in his secret lair, then the story comes off as lazy, and probably should. But if that omniscience reveals that the "villain" is actually just another guy who's daughter was murdered by the sole inhabitant of the Moon, then blowing up the moon doesn't seem so evil anymore.

So maybe a little omniscience, even if it's never written down and remains in the background, might make for better characters. Maybe if we made the effort to mentally document what our antagonist is doing at every minute in the timeline, and we focus less on making our protagonist look protagonistic, then we create a story that's a bit more rounded.

Of course, this is just me thinking into the computer screen as part of the Non-Expert's Guide to Writing, Which Might Have Good Advice, But Maybe Not. Let me know your thoughts.

Now on to the Spotlight.

When writing from one character's POV, it can help to at least plot out what the other character(s) in the scene are doing and thinking so their actions make sense. How things unfold should make sense from every POV.

[Nathan's note: I had no idea that the one submission for the Community Wisdom section discussed the same topic my introductory ramble was about. Great minds and all that.]

From the vault of LitReactor Classic, this thread is pretty self-explanatory, and was set up by the previous community manager three years ago. Post a paragraph from something that you're currently working on. It's simple, but it clearly has legs, and for good reason. It shows that you're making progress on something. You can watch your voice change. So on and so forth. It's not really a collaboration edit or anything, just a chance to show people how you do you. We like to give our members chances to show off, so let's see what you've got.

Sometimes, it doesn't need to be specific. This thread asks for general advice concerning one of the most difficult aspects of writing, and one that is most overlooked by new writers. Anyone who's taken a serious stab at writing knows that the first draft is rarely recognizable in the final copy, and there is a lot of work (and skill) that goes into making that happen. While you're encouraged to read up and do some serious research on editing, the helpful nuggets found in this thread may give you the boost of inspiration you need to dust off that long-abandoned piece and make it into something glorious.

So this isn't so much a thread as a post hence far, but it asked a question I frankly think more writers should be asking. How do you market a self-published book in a way that isn't annoying to your entire Facebook feed? Self-publishing is a different marketing game than regular publishing (in some ways, at least), and self-publishers don't have a lot of the advantages that those who publish through traditional methods have. Plugging the work on your blog will only take you so far. So what are your suggestions? Let us know.

"Beyond the Wall of Sleep in Red Hook, Brooklyn" by Joshua Chaplinsky

Josh is well-known for many reasons, most of them indescribable in any words known to humankind. He also wrote Kanye West: Reanimator, a riff on Lovecraft's infamous zombie story. But this is not his only time to meet Lovecraft head-to-head on his own turf.

Dunhams Manor Press recently published another Chaplinsky piece titled "Beyond the Wall of Sleep in Red Hook, Brooklyn." The title references "The Horror at Red Hook," another notorious Lovecraft story which, like "Herbert West: Reanimator" is filled with racism and bigotry, and is less-endearing to modern readers who find such attitudes irritating. Of course, that makes it all the more challenging to improve on the concept, and apparently, the people at Dunham Manor were impressed enough to publish the piece online for free.

Seriously, this Chaplinksy guy has the kind of momentum that might even topple Donald Trump's presidential campaign. Anyone else want to join me for a write-in campaign?

Joshua Chaplinsky is the Managing Editor of LitReactor.com. He has also written for the popular film site TwitchFilm and for ChuckPalahniuk.net, the official website of 'Fight Club' author Chuck Palahniuk. He is the author of Kanye West—Reanimator. His short fiction has appeared in Zetetic, Motherboard, Vol. 1 Brooklyn, Thuglit, Dark Moon Digest, Cracked Eye, Pantheon Magazine, and more. More info at joshuachaplinsky.com.

Ghost of the Navigator by Thomas Muncie

Thomas has been in the Spotlight before when announcing his first book, Shadow's Talent. Now the sequel has arrived, and it's done so with a marching band comprised entirely of lions playing didgeridoos.

That's my way of saying that it's arrived in spades. I probably didn't need to explain that.

Anyway, Ghost of the Navigator continues the story of Shadow, and at an astonishing 600+ pages, it has a lot of story to tell.

Three years on from the birthday party that left him crippled for life, Shadow is well on the way to wrecking what’s left of himself. When stealing morphine from a hospital almost lands him in prison, his family gives him one more chance to clean up, and he takes it. By his 21st birthday, he’s six months sober and settling for a simple and honest life. Then an unexpected visitor turns up at Shadow’s home, with a new idea about how to get his body restored.

Everything comes at a price though, and the elusive Blake Stanford’s price is going to be more than Shadow wants to pay. Despite his loyalty to both Shadow’s family and the Talent Council, Blake has dangerous ideas. The kind that can either make history or get people put in prisons that don’t officially exist. If they live long enough to reach them.

Pick it up and show some support to a fellow. Thomas, we're looking forward to more good news from you in the future.

Tommy Muncie has been a member of LitReactor since January 2013, under the name Chacron, and has participated in the Teleport Us and Arrest Us competitions as well as maintaining a healthy presence in the LitReactor workshops.

As I've said before, I'm always scouting for new ideas on things we can do in the forums. There are several ways to get in touch with me, but the easiest is to shoot me a PM. If you've got something you want to pitch to me, feel free.

See you all next month.

Searching foreword for more information and this subject has constantly interested me. Thank you for composing an article that has awesome substance and is elegantly composed and even I am inspired by your written style too. You can take this munnar call taxi for any tours and travels program of your family. They are providing secured and comfortable cabs.