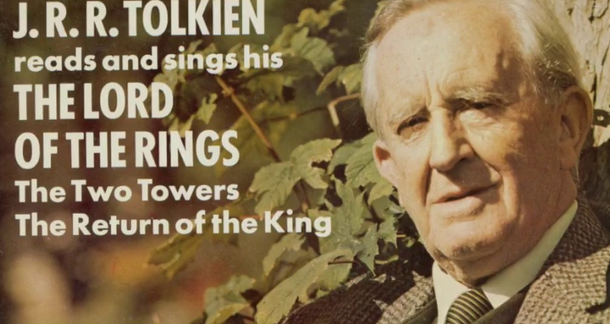 Audiobooks. You either love them or—does anyone not love them? What's not to love when Neil Gaiman reads The Ocean at the End of the Lane directly to you—in your car? So great. I just love his intrepretation of the work.

It's easy to think of audiobooks, or more generally, authors reading their own creative works, as a recent thing. Many people associate them with digital technology, which correlates with sales. The Audio Publishers Association reports this industry has seen double digit growth every year for the past six years. Readers spent $2.5 billion on audiobooks in 2017! Because I'm a nerd, I associate audiobooks with CDs and public libraries, because that's where I first encountered them. Also, I drive a Prius, which still has a CD player and CDs have superior audio quality. But I'm not the only one who associates audiobooks with libraries, since over half of audiobook listeners in 2017 used a library to discover audiobook tiles. Libraries are so useful!

The Audio Publishers Association reports [the audiobook] industry has seen double digit growth every year for the past six years.

But this column isn't about finding Tina Fey's recording of her memoir Bossypants (which is wonderful), it's about recordings from the past. It didn't even occur to me that I could seek out recordings of my favorite authors until I was looking at lists of the LPs that circulated from my library and I discovered that a huge number of them were "spoken word" recordings, specifically authors reading their own works. No, not Shakespeare, smarty. Obviously, I'm talking about authors who were alive during the age of audio recording technology, which started mass distribution at the beginning of the 20th century. Recordings exist on all kinds of exotic formats, like wire coils and wax cylinders, but most of the audio distribution in the 20th century happened on discs: shellac 78s and then vinyl LPs, which were later followed by CDs. And yes, magnetic tape.

Recorded books have a lovely history, originating as a service to people with visual impairments. The Library of Congress and the American Foundation for the Blind teamed up to create the Talking Books Program in 1931, with their first release being a chapter from Helen Keller's Midstream. By the 1950s, the audiobook industry was born and distributing recordings to libraries and schools. Libraries started actively collecting them in the 1970's, and now you can download the audiobook of Stephenie Meyer'sTwilight from your local public library. I can't help it, I still like those badly written vampires.

But I digress. There are multiple paths you may pursue in order to find a recording of Gertrude Stein reading her fascinating and percussive prose. YouTube is the fastest route. There are citizens among us totally devoted to digitizing and uploading old recordings, and it is impressive how much you can find there. Equally impressive, to me, the librarian, is how awful the descriptions (or metadata) are. If you want something to cite, that's not my first choice. I want the liner notes, the publication information, the context. Also, audiobooks are popular because they're just audio and they don't distract you with visual information.

I recommend going to the source and finding the recording yourself. WorldCat.org is a universal catalog where you can find library holdings all over the world. Try a basic search for your author's name and "reading." Example: Sylvia Plath reading or Robert Frost reading. You should then get a list of recordings on various formats which you can find or request at your local public library. Here are a few gems I found: Aldous Huxley reading Brave New World; 100 American poets reading their works; reading and commentary by Langston Hughes; Dorothy Parker reading Horsie; Chinua Achebe reading Arrow of God; and J.R.R. Tolkien reads and sings from his The Lord of the Rings. Does it get any better than that?

Enjoy! Do you have a recording of a favorite author to recommend? Let us know in the comments!

Thanks for this reminder of all the wonderful literary voices reading their works!

For readers who would love to hear Frank O'Hara reading Having a Coke With You -- or hosts of other great poets reading their work -- The Poetry Foundation (www.poetryfoundation.org) is a wonderful resource.