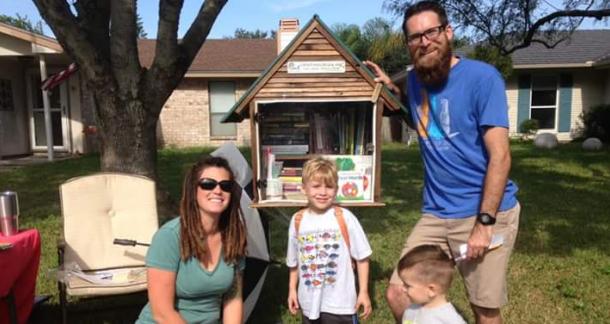 Have you ever found yourself walking down the street, searching for sustenance and caffeine, and happened upon a Little Free Library? What is this anomaly? It's kitschy and cute and — hey! The most recent book in the No. 1 Ladies' Detective Agency series is in there! This is the best day ever!

And so begins your relationship with a tiny phenomenon that is sweeping the globe.

The Little Free Library movement started in 2009 when a man named Todd Bol from Hudson, Wisconsin, was laid off. He decided use his new free time to convert his garage into an office, and in the process wanted to repurpose the old garage door. His mother had been a school teacher, so to honor her, he created a miniature one-room school house. Then, in May 2010, he hosted a garage sale and mounted the school house on a post outside his house and filled it with books. The community was enthralled, everyone loved it, and so he decided to make a few more. He soon teamed up with Rick Brooks, a professional in community outreach, and they incorporated Little Free Library as a nonprofit organization. An NPR appearance and a few news blurbs later, they suddenly had interest in Little Free Libraries from all over the country. And now, 16 years later, there are 50,000 registered Little Free Libraries across the United States and in 70 countries. See some absolutely fantastic examples @freelittlelibrary.

The Little Free Library movement started in 2009 when a man named Todd Bol from Hudson, Wisconsin, was laid off.

Once upon a time, libraries required patrons to pay a subscription fee in order to use their collections. A certain steel tycoon named Andrew Carnegie (1835-1919) made it his mission after earning his fortune to build public libraries that would not require payment to use them, hence the name "free libraries." The Free Library of Philadelphia retains this naming convention. In his lifetime, Carnegie built 2,509 libraries in the U.S. and abroad. And what amazing structures they are! Brooks and Bol made it their initial mission to build one more Little Free Library than Carnegie built, which they quickly achieved.

Would you believe not everyone loves Little Free Libraries? Especially some zoning boards. A well-known incident involves a 9-year-old boy in Leawood, Kansas, who built a Little Free Library with his father and grandfather as a mother's day present for his mom. They were served a zoning notice and faced a stiff penalty for the illegal structure. Seriously, universe? There's not much one can do to prevent the torching of one's Little Free Library, and there's also a small pillaging trend, in which strangers in the night take all the books in a library and later sell them to used book stores. Stewards are advised to mark their books as free and not for resale.

Fortunately, the vast, vast majority of Little Free Libraries are loved and nurtured. Stewards are encouraged to have a grand opening for their library, inviting neighbors, community leaders, and press. Some libraries use one shelf for a seed exchange, some give away poetry, or tokens commemorating the loved one to whom the library is dedicated. Stewards around the world report that their libraries have become community hubs where they meet more people in a week than they had in the previous year. The libraries take on a life of their own as one book is exchanged for another and the flavor of their communities manifest on their shelves. Who would have thought that such a tiny container would yield such happiness?