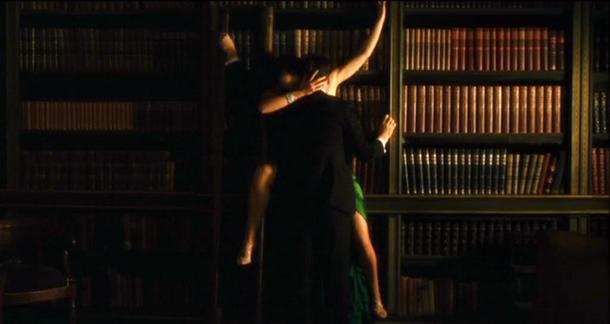 Libraries are a popular setting for so many things. Fashion shoots, sex videos, TV commercials—you name it. I’m probably biased, but I find library scenes in film to be unusually memorable. Sometimes, they are the most memorable part of a film. Who can forget Robbie and Cecilia’s library tryst in Atonement? Film excels at conveying atmosphere, and the library serves as a blank slate on which to project a mood. Libraries can be creepy, intimidating, warm, inviting, or simply mundane. Film characters interact with libraries in ways that make them feel confident, scholarly, knowledgeable, overwhelmed, unworthy, stupid, or trapped. That’s quite a gamut for a building to span, but such is the beauty of the library.

It wasn’t easy to keep this list short, but when I thought about libraries in film that really created a lasting impression in my psyche, these are the ones that came to mind. 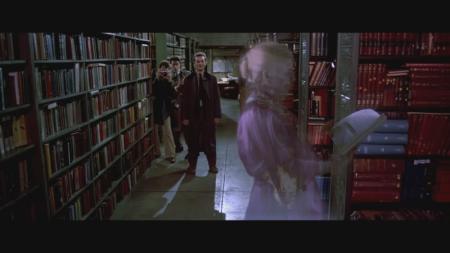 Is there anything scarier than the library ghost scene in Ghostbusters? By the time Venkman, Stantz, and Spengler find her, the ghost has already terrified a librarian by emptying card catalog drawers and engaged in “symmetrical book stacking.” The cramped, dark book stacks (which were filmed at the Los Angeles Public Library—only the exteriors were shot in New York) are a perfectly natural place to find the ghost of an old reader (or librarian) who then turns into a skeletal banshee. Tightly packed book stacks with low ceilings seem to be on the way out in libraries, and that’s a shame. Fortunately, there are still lots of places where you can encounter them, namely in large, old public and academic libraries. 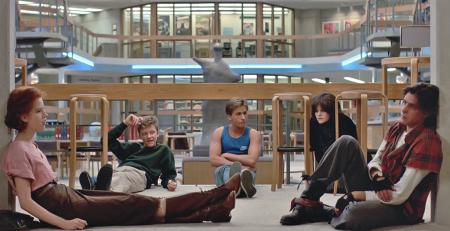 My young self couldn’t get enough of this movie. A teen drama about high school misfits set in… a library! Still, I remember thinking, “This is like no school library I’ve ever seen.” My high school library was a little L-shaped room tucked away in the back of the cafeteria. It was dark, the collection was pathetic, and it always smelled like fried food. These kids, however, had a library with multiple floors, skylights, giant weird sculptures, and a huge collection. What did they have to complain about? It wasn’t fair. If only I had known that it was all a facade. In fact, John Hughes shot the film in a converted school gymnasium, which now serves as a district headquarters for the Illinois State Police. 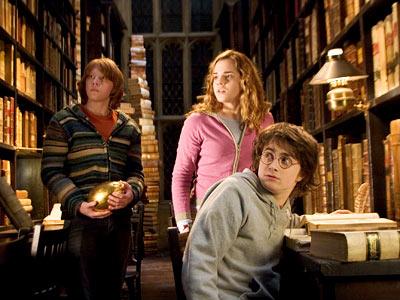 Thank you J. K. Rowling for creating such an interesting and carefully drawn world that it was almost impossible for the four directors who took on the story to fuck it up. The Hogwarts Library, filmed at Duke Humfrey’s Library, a special collections reading room at Oxford’s Bodlein Library, is a place of concentrated magic. Not only are all the books about magic, they also possess magical qualities. For example, in Half-Blood Prince, we see Hermione shelving books by slowly releasing them into the air so they can reshelve themselves (!) Harry, Ron, and Hermione use their research skills to locate the answers to just about every quandary they encounter. Such model library users! Then the dark lord arrives and turns Hogwarts into a battleground.

The words “Jedi” and “archives” come together in a kind of perfect synergy. Of course such a thing would exist, and of course it would be awesome.  Located in the Jedi temple on the planet Coruscant, the Jedi Archives is actually a direct visual replica of the Long Room at Trinity College Library. (Lucas denies this.) The busts of philosophers are transformed into Jedi knights and the rare books into glowing blue digital storage. Records on the entire galaxy are stored there, and are presumably complete and comprehensive. As the librarian informs Obi-Wan Kenobi, “If an item does not appear in our records, it does not exist!” I envy her confidence.

Pretty much any movie with robot characters is a hit in my book, especially if it looks at the role of robots in society. What’s not to love? It’s fascinating! Aside from the main narrative of Frank and his robot assistant, this film also explores the future of libraries as information becomes digital. The local library, managed by the perfectly cast Susan Sarandon, has been purchased by a young investor. He plans to remove all the books, leaving a glorious, dark-wood paneled space, where a new generation of patrons will share library “experiences,” seemingly while reading books on their digital devices. The library scenes are beautiful and poignant and convey that intangible sense of library as place.

So LitReactors, what did I miss? What are your favorite libraries in film? Please share in the comments!

The library in Berlin in "Wings of Desire."

eirikodin from Auburn, NY is reading Mediterranean Caper by Clive Cussler April 12, 2013 - 8:27am

I always like the library from What Dreams May Come.

Do animated libraries count? If so, the one in Disney's Beauty and the Beast is one of my favorites!

What about the planet-sized library in the Doctor Who episode "Silence in the Library?"

I know it's a cartoon, but the first thing that popped into my mind with memorable library scenes is Beauty and the Beast.  =)  Even as a child I dreamed of having a library like that!

Do you love libraries? This is a wonderful, wonderful book about them. I can't recommend it enough:

The Library at Night

Personally, I probably would have included the library in Indiana Jones and the Last Crusade, the Biblioteca di San Barnaba in Venice.

I want a library like the one in Becoming Jane. Hogwarts' library is one of my favorites too.

As awful as the film was, the personal libraries in The Ninth Gate were pretty drool worthy.

The library in S7VEN. It's a great setting for the Morgan Freeman character's discovery of the thematic thread behind the murders but also acts as a visual reminder of the differences between how the two protagonists approach their investigation: Freeman as older, experienced, and wiser hits the books while Pitt's character as young, brash and impatient hits the streets.

Boris Balkan's private library in The Ninth Gate. The protagonist in every book in his library is the devil. We don't get to see much of it but it evidences Balkan's obsession early in the movie so that the audience knows he will go to any length to get a book he wants.

Damn, how do I delete that?

You can't delete them but you can edit them...