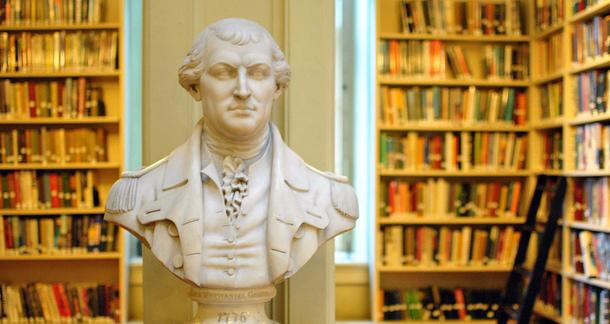 Several months ago, I was wandering around Portsmouth, New Hampshire when I walked by a brick building with its doors swung open to visitors. Deciding to look inside, I discovered one of the most beautiful libraries I’d ever seen. The books on the shelves were bound in old leather, and covered topics from botany to nautical lore. Portraits lined the walls, and the smell of parchment permeated the air. Not a bad find for what started out as a Starbucks run.

Naturally, I became curious: how many towns have athenaeums, and what exactly distinguishes an athenaeum from the average public library?

To answer the second question, athenaeums differ from most libraries in that they aren’t designed solely for reading in a corner alone, but as a communal forum for discourse. When speaking of athenaeums, the term can refer to a club, or a society, as well as a library. Some even have theaters, like this athenaeum in Romania.

The concept is an ancient one; in 2009, Roman archeologists unearthed the ruins of a 2nd century athenaeum, built by Roman emperor Hadrian. Named for the city of Athens, Hadrian’s objective was to promote scientific learning and literacy. The idea soon spread from Rome to Carthage, and then to the rest of the Western world. Today’s athenaeums are the descendants of this early structure.

Particularly popular in the early nineteenth century along the East coast, many athenaeums now house antique collections or rare manuscripts. Most require a membership to access at least a portion of the collections, but their contents are available for public use. The fantastic thing about athenaeums is that they are not strictly museums. They were originally built to serve a function, and many have gone to lengths to retain that functionality: in other words, yes, you can read the books.

Although some might find the air of antiquity a bit intimidating, athenaeums were never meant to be stuffy— rather, they were places for debate and new ideas. Harvard librarian Matthew Battles notes in Library: an Unquiet History:

As the education of gentlemen had been founded strictly on classical literature, it had left out the emerging discourses of science, politics, and economics; more and more, those topics thrived in publications like the Athenian Mercury. Founded in 1691, the main organ of the group of coffeehouse wits who called themselves the Athenian Society...

Today, athenaeums try to keep the tradition of discourse alive by holding events in the community and inviting guest speakers. The Boston Athenaeum, for example, has upcoming discussions on the future of higher education and the one year anniversary of the Marathon bombings.

According to the New York Times, there are approximately 20 athenaeums across the country, but the ambiguity of what precisely constitutes an athenaeum means that some are probably flying beneath the radar. Many are worth the fare in travel for devoted book lovers. Some, such as the Boston and Portsmouth Athenaeums, are situated in grand old buildings, but others are newer, such as the Caltech Athenaeum located in Pasadena, California.

A (partial) list of athenaeums in the United States:

Image of the Portsmouth Athenaeum used with written consent.

Interesting that most of them seem to be situated in New England. You'd think some of the Old South would have lovely places to gather old knowledge and hold historical and contemporary discourse. Of course, with the increasingly conservative climate there, I can see how it might be stifled...