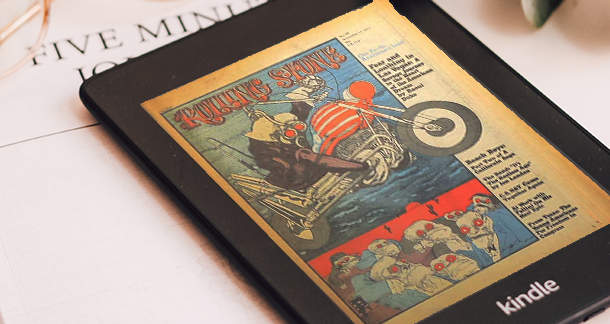 If you’re a self-pub loser like me, you probably got an email about Kindle Vella, Amazon’s new self-publishing system/platform/thingie. If you’re a self-pub success story, your ASSISTANT probably got an email about Kindle Vella, and they printed it out, sealed the printout in a real, paper envelope, and then you used an ivory-handled letter opener to open it. This is how I assume the wealthy handle email.

What is Kindle Vella, why is it, who is it, and what good is it, anyway?

Wait, what? That’s a dumb question. That doesn’t even make sense.

Vella is a new platform for digital, serialized stories.

Because it’s not 1927, I’ll excuse anyone who doesn’t know what that means. If you ARE a time traveler from 1927, you were smart enough to time travel but don’t know what a serialized story is? You make for an interesting Venn diagram, sir.

A serialized story is a long story broken up into sequential episodes, so you’d read one chapter in one issue of a magazine or newspaper, another chapter in the next, and so on.

Why Was This So Popular?

Phantom of the Opera, Heart of Darkness, The Jungle, In Cold Blood, Fear and Loathing in Las Vegas: all “classics” that started life as serials.

If you were a publisher, a serial let you crank out a chunk of a story, see if it had legs, and then only print the entirety if it was popular. Remember, it was hard as hell to print a whole book back in the day. It was totally worthwhile to find out if a book was a total dud before you took the time to get it printed.

Also, consider that back in the day, literacy spread faster than wealth. Serials meant you could sort of buy a book on the installment plan because you’d never save enough to buy one outright.

Why Did Serialized Stories Fall Out of Favor?

Short answer: newspapers used to be more about entertainment. Then that entertainment moved to TV and radio, and the papers focused on news. There have been a couple projects that dabbled in serialization over the years, but for the most part, while serialization lives on in comics, TV, and podcasting, the serialized novel is dead.

If serialization died, why revive its corpse?

If serialization died, why revive its corpse?

Two or three years between books is a long time. Unless you’re a big, big author who just released his biggest book, the hype for Book A is long dead by the time you get to Book B. Vella might be a good alternative to activities like tweeting and blogging to keep your name out there, especially if you’re a fiction author and your strength is in fiction writing, not tweeting and blogging. The Amazon cesspool might be a preferable alternative to the social media cesspool in a “Would you rather burn or drown?” kind of way. Slightly in Vella’s favor: At least by the end of all that work, you’ve got a novel.

The other thing is that the novel, as a format, has to change or die. Where it used to be common to have a book on the nightstand, people are leaving books for other forms of entertainment. Perhaps creating a novel with small, digestible chunks in mind will improve overall readability, reach new audiences, and give the novel a new niche in the culture. Maybe an episodic style will give us some new takes on the novel. Maybe the “Everything old is new again” approach can breathe some life into the novel.

How Does Vella Work For Authors?

You set up publication dates for portions of your story, and people can buy them. The price is set by Amazon, based on 100-word increments. Quick math is that you make 2 cents for every sale of a 500-word story chunk, and if someone hangs in there for an entire 50,000 word novel, you’d make two bucks from that reader. You don’t have to finish your entire story before you upload and schedule, each portion works as its own thing.

How's This Different from Kindle Self-Publication?

You publish in chunks, and Amazon sets the price instead of you choosing your own price.

Why Is Amazon Doing It?

Let’s talk through the advantages of tokens using the economics of 1990’s mall arcades.

Every time I write about Amazon, I get the impression that everyone’s itching to hear about how evil Amazon is. If you’re an “earning money is inherently unethical” kind of person, this section is for you.

I can only guess how this works for Amazon because I do not work for Amazon, and Jeff Bezos has not been reachable by screaming “Alexa, call Jeff Bezos” into any of my devices or at the one person I know who is, unfortunately, named Alexa.

So here are my non-legally-actionable (fingers crossed) theories.

Let’s talk through the advantages of tokens using the economics of 1990’s mall arcades.

At an arcade, you cram $5 bucks into a token machine, 20 tokens plink out, and they’re only usable at that one arcade. Whether you spend all 20 that day or get your tokens, turn around and walk out, the arcade has your money.

Tokens don’t spend like money. It hurts less to blow 20 tokens than $5. People spend more than they intend to.

The biggest value of tokens to the arcade: if you leave with some tokens, those tokens might eventually draw you back, in which case you will probably spend a little more money, end up with more extra tokens, and the cycle continues.

Not to get too finance bro, but here, let me put on my fleece vest and loafers...just get some hair gel…rev up some arguments for the redeeming qualities of Wolf of Wall Street...

Imagine that you pay me $10 bucks a month for all of 2021 because you just love me, and I invest it every month. If you pay me the total $120 in one lump sum at the beginning of the year instead, I can invest that entire sum and earn on it for the entire year. You pay me the same total, but my earnings will be higher.

Scale those small potatoes numbers up to big, honkin’ Russetts that Amazon is dealing with, and you start to see why digital tokens and payment up front might work in Amazon’s favor.

Kindle Vella forces customers to engage with Amazon more frequently to see whether an update has come. Instead of me checking Amazon every...2 years or so to see if my favorite author has something new, now I’m checking every week.

Amazon is well aware that the more often you get people to Amazon, the more they’ll buy. Every time someone passes through Amazon, that’s additional money for them.

Should You Go For It?

Maybe you’ve got an unkillable mad-on for Amazon, so anything that sends people their direction in any way is an ethical dillemma for you. That’s probably the best reason I can see to stay away, and it’s pretty weak. I mean, enjoy regaling your friends with the tales of how you’ve avoided Amazon. I’m sure you’re a blast and a half.

Me? From my point of view, there’s not all that much new under the publication sun, so when something different pops up, I’m on Team Why The Hell Not? I’ll try reading something on Vella, and I’ll put something out myself. See what happens. Because...why not?

Get Fear & Loathing in Las Vegas at Bookshop or Amazon

Get The Wolf of Wall Street at Bookshop or Amazon