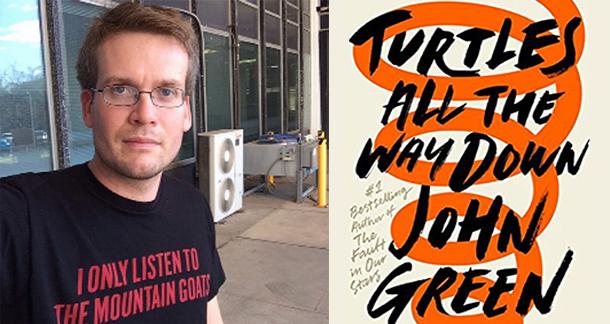 It might be cliché for me to credit John Green with inspiring me to write young adult fiction. Especially since I didn't discover him until after The Fault in Our Stars was published, so I can’t even claim some hipster-like early-fan factor.

So I’ll accept that it’s a little cliché to fall for a genre because of one outsize author, but I would argue that I bust stereotypes in why I want to be like John Green.

See, it’s not just (just) because I’ve long had this deep-seated desire for fame and recognition. For a long time, I’ve deeply craved to be known, in every way. And writing is something I’ve done since I was a wee tot, something that, over the years, has become more and more a part of my identity. So of course I would want to be known for my writing.

And John Green is one of the rare breed of young adult authors who’s achieved mainstream name recognition. I mean, you tell someone you write YA, they’re gonna gape at you and go, “Oh, like John Green and JK Rowling??” Which, yeah, but also like Rainbow Rowell, and Leigh Bardugo, and David Arnold…I could go on. There are a ton of amazing writers of YA who aren’t as known cross-genre. But John Green has achieved so much recognition that almost everyone knows his name.

There’s something unique about a genre where so much of the story remains after the last page. It makes it impossible for there not to be hope.

So of course people want to be like him!

But for once in my life, I wasn’t driven to do something because of the chance for name recognition.

Well, not entirely, at least…

No, it’s something a little deeper. I wasn’t really a young adult anymore by the time I discovered John Green — I was a 20-year-old junior in college. But that book made me feel something deeply; I was in my semi-lofted bed, clutching it to my chest, sobbing. The kind of tears I normally reserved for my own sorrows, my own mourning.

I’ve always been deeply affected by books; it’s one of the reasons I wasn’t allowed to read Harry Potter for a long time, because my mom was afraid I’d become heartbroken that I couldn’t be a wizard like Harry.

This was something different, though, something new and fresh. It was a raw wound, and it was…almost pleasant in its pain.

I was driven to tears by that book, but I was glad I’d had the chance to meet Hazel and August, journey with them for a while, and read their story. As much as my heart ached in that moment when that one thing happens toward the end (trying to be spoiler-free here, but if you’ve read the book, you know what I’m talking about!), I wouldn’t have given up the joy of reading the rest of the book for the pain of that one moment.

That was…huge. I don’t have a high threshold for pain, of the physical or the emotional variety. I break easy, is what I tell people. I’m fragile, like a flower or a delicate glass bowl. Should the wind blow the wrong way, I might just shatter. And I tend to resent things that make me sad, that make me cry like that.

This time, though, I didn’t.

Those are the stories I want to write. The kind that are so beautifully heartbreaking, the kind that make you smile through the tears and remain grateful you had the chance to experience them in the first place, despite it all.

I don’t know why, but I feel an indelible stamp of despair when I read adult literature. It feels cynical. You cry, but it’s not a good cry. It’s a hopeless cry. Maybe that just means I haven’t been reading good adult literature, but the truth is, even bad YA doesn’t leave that sour taste in my mouth.

There’s something unique about a genre where so much of the story remains after the last page. It makes it impossible for there not to be hope.

The Fault in Our Stars was the first contemporary YA book I had read, and it made me realize — oh. These are the stories I want to tell.

I knew I wanted to be a writer when I was in second grade, but it took a while to really settle on what kinds of stories to write. For a long time I wanted to write historical fiction, then fantasy, then new adult literature. It wasn’t until John Green that I realized there already existed a perfect niche for me: contemporary YA.

That book was my gateway drug to a wonderful world of stories about real-live boys and girls in today’s society trying to figure stuff out.

We talk a lot about “coming-of-age” stories, and I think almost every YA is, in its own way, a coming-of-age story. It’s about discovering something about yourself, and when it ends, whether things are good or bad, there’s still time to keep going.