James Joyce Loved Trieste, As Do I 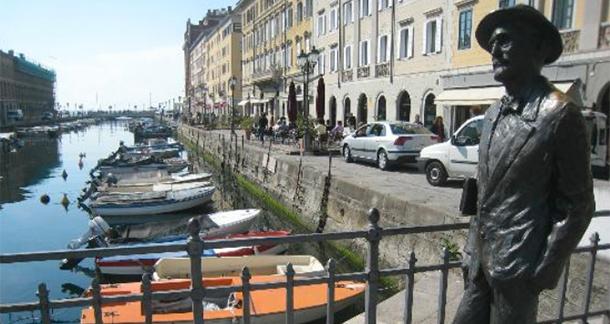 There is a statue of James Joyce on a bridge across the Grand Canal in Trieste, Italy. A few steps down the road is a bar (coffee shop) called Café James Joyce. It has green walls, a shiny gold bar, and tables set into the wall in front of windows, so you can sip an espresso, people-watch, and ruminate about James Joyce, all at the same time.

It’s a fact that James Joyce spent most of his Italian life in the port city of Trieste; it’s also a fact that most of the world doesn’t even know how to pronounce “Trieste,” let alone Joyce once walked its streets.

I grew up walking those same streets. I have a crystal-clear memory of walking down the side of the Canal, the sky darkening around me, falling ever more behind my family because I was scribbling a poem in my notebook.

I have other, fuzzier, memories of sitting out on Molo Audace, the stone pier that extends into the Adriatic Sea, watching the waves dance, the city lights shiver on the surface, and penning my deepest thoughts into journals and terrible poems.

It was in Trieste that Joyce began penning some of his best-known literary works...it’s not unimaginable to say I believe he was inspired by the city.

Trieste isn’t the city that made me want to be a writer, but it very well may be the city that molded me into one. There’s something infinitely literary about it, from the architecture to the very air we breathe. It’s a city that inspires.

Joyce moved to Trieste when he was a mere 22 years old and supported himself by teaching English. He took his children to school, where they picked up on the dialect spoken by most born-and-bred Triestini.

It’s a rougher kind of Italian, all chopped words and guttural sounds, and it’s a huge regret of mine that I was too timid in middle school to even attempt to pick it up. Joyce’s kids were smarter; they learned, they assimilated better.

It was in Trieste that Joyce began penning some of his best-known literary works: you’ve heard of Dubliners and Ulysses, surely. I wouldn’t want to be hyperbolic, but I think it’s not unimaginable to say I believe he was inspired by the city.

It’s one he returned to more than once; it’s the kind of city that calls to the soul; one visit and you’re tethered to its Canal Grande and Piazza dell’Unita d’Italia by some invisible, unbreakable cord.

I, like Joyce, keep coming back to Trieste. I just spent three months in the city visiting my parents (who still live there), and even though I’ve since returned to the ease and convenience of America, even though I love being able to drive a car anywhere and pick up the phone to have anything delivered to my doorstep, I miss it.

I miss the sunsets that spilled orange light across the water or tinged the horizon pink. I miss the sapphire blue of the Adriatic on a good day, the blustery silver of it on a bad one. I miss the old grey walls of buildings centuries old and even the creak of the wooden floors in our apartment. And when I verge on becoming too sentimental, I think about the stench of cat piss in the alleys, the broken tram, and still I miss it.

There’s something about the city that you can’t put words to; read Dubliners and while you imagine Dublin, picture Joyce wandering penniless through the streets of Trieste, breathing in the salt-water air and letting it inspire him.

I visited Trieste at New Year's Eve one year and enjoyed the city immensely. Went searching for some restaurant or another that Joyce supposedly frequented, but it turned out to be closed, so I just wandered the streets until I stumbled upon a lovely little neighborhood pizzaria where I had pizza diavola and a half-carafe of wine and hung out with some very nice people.