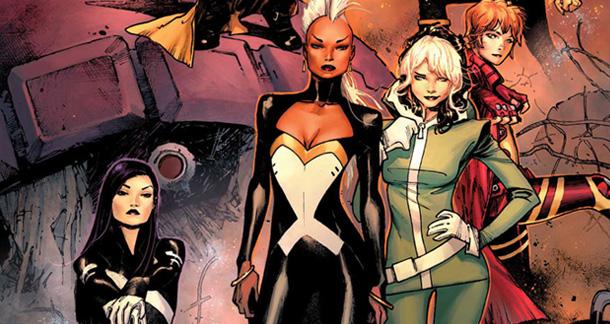 Brian Wood's new X-Men book (X-Men #1), the last of the "Marvel Now!" titles to launch, debuted last week to much fanfare and huge critical acclaim. I count myself among its fans. I reviewed the issue for Comic Book Resources and felt crazily fulfilled to be able to do so, because in so many ways—from the creative team to the cast—this was a comic book I'd been waiting nearly 20 years for.

But not everyone was equally excited about this new X-Men, largely thanks to its all-female cast. While there was a ton of excitement over Marvel putting the A-list creative team of Brian Wood and Olivier Coipel behind an X-Men made up of female superheroes, there was huge blowback as well. Wood himself was peppered with absurd complaints, from suggestions that the book would be much improved by the inclusion of men, to calls of reverse sexism. Even more bizarre were demands for an all-male team to even things out, which of course ignores the fact that all-male teams already exist, and are commonplace, and even exist in the current Marvel Now! line-up in the form of the New Avengers.

Why is this such a big deal in the first place? These characters have been around and beloved for a long time. And the X-Men in particular have always had a reputation for powerful female characters.

Though all-female teams are not common, they're not a completely new phenomenon in mainstream superhero comics, either. Birds of Prey was famous for starring fan-favorite lady-heroes Oracle and Black Canary, and also regularly featured a primarily and sometimes entirely female cast. Earlier this year Marvel launched another all-female team book called Fearless Defenders, starring Valkyrie and Misty Knight, with Dani Moonstar and Hippolyta joining in later issues. Additionally, though Marvel has had a tough time maintaining long-running solo female titles, they've brought back Ms. Marvel and even given her (and her book) the name she deserves - Captain Marvel. Similarly, Journey Into Mystery, though not named for its lead, is the starring vehicle for Sif, one of the baddest female warriors around. In other words, it's a good time to be a fan of female superheroes at Marvel comics.

Fearless Defenders did not draw the same level of criticism that X-Men did. Whether that's because X-Men dared to call itself X-Men or because it was a higher profile book with a bigger launch, it's hard to know. Regardless, the fact that Marvel currently has two books with all-female superhero teams, books that are heavily action based, is kind of a big deal. The fact that those two female-led books are very different books, with different tones and executions is also a great thing. Variety is the spice of life, kids!

Marvel having two all-female teams and at least two female solo titles is particularly resonant considering that a few years ago, Marvel did a “Year of Marvel Women” event that, with the exception of a few bright spots (Girl Comics), was a disappointment. In the end, that "year of women" felt like a token bone being thrown to readers interested in female characters and amounted to nothing more than series of unexceptional one-shots and mini-series that didn’t mark any real change. So, to see, just a few years later, Marvel being this devoted to supporting their female superheroes in their own books and with A-list creative talent is pretty huge.

But why is this such a big deal in the first place? Doesn't it seem kind of obvious? These characters have been around and beloved for a long time. Few readers doubt their star power. And the X-Men in particular have always had a reputation for powerful female characters, often outshining their male counterparts. But it IS a big deal because just this week, on a post I wrote about why I love some of these characters so much, an anonymous comment came through making a sexist joke: “I didn’t realise [sic] they had comics in kitchens.”

It is just absolutely absurd that in 2013 that's still a joke someone even thinks to make. The world can't change fast enough, folks.

While that’s certainly not the majority attitude (or at least most of the time I believe it’s not the majority attitude) it’s still an actual thing that exists in comics fandom. The best way to change that antiquated and laughable attitude is for great creators to write great female characters and for books like this —well written, beautifully drawn, action-packed, badass comics—that just so happen to star women to exist and be incredibly popular.

One of many bizarre complaints lodged at Wood (and less directly, Marvel) was the idea that if the new X-Men book was comprised of only female characters, it shouldn’t be called X-Men. Wood’s brilliant response was that these women are and have always been X-Men and why should that change?

I’m reminded of Joss Whedon here, and his famous answer to the continued question of why he keeps writing “strong female characters.” His response? Because you’re still asking me that question.

Let's not have that question asked. Let's move on to a place where we can ask more interesting questions because strong female characters are just as common, celebrated, layered, and badass as their male counterparts.

Girls on Film: Marvel vs. DC

Zackery Olson from Rockford, IL is reading pretty much anything I can get my hands on June 6, 2013 - 8:03pm

Bravo. It's far past time for something like this. Comics have been male dominated for decades and this probably should have happened at least twenty years ago. As for Whedon's comments, I can't argue with the guy who created Buffy and gave me seven years of compelling storytelling centered around one of the greatest female heroes of all time.

Dwayne from Cincinnati, Ohio (suburbs) is reading books that rotate to often to keep this updated July 26, 2013 - 7:56pm

When I first read this there was something stupid about it that didn't click and it just occurred to me. This cast sucks. Not because of gender, they just don't fit well together, seem kind of boring. Jean Gray and Storm, sure no brainer. Kitty Pride or Jubilee, I guess maybe but not both. Too similar. Rachel Gray and Pyslocke are too similar of characters. I think that instead of this over lap Polaris and/or Siryn would have been a better addition to an X-Women title.

Although I'll give them credit for not including Stacy X or Dazzler.