Is This Your Card? How Michael Chabon Uses Suspense in Literary Fiction 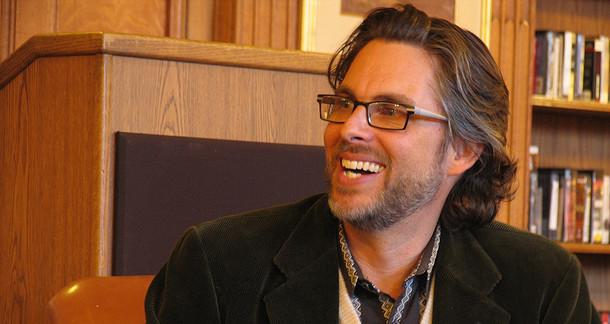 Perhaps my favorite thing about Michael Chabon’s writing is that whether writing about academics or comic-book creators, writing swash-buckling adventures or navel-gazing sexuality-discoveries, he knows how to craft a story with a capital S.

In an interview for his debut novel The Mysteries of Pittsburgh, Chabon said, “I wanted to tell stories, the kind with set pieces [...] and beginnings and middles and ends.” That he does. And to get across exposition, back-story, and character-development, even theme, one of the techniques that I’ve noticed he uses often is Suspense.

Perhaps the most handy trick for manipulating Suspense is Dramatic-Irony. When you think of Dramatic-Irony, don’t think of a rich hipster with Pabst foam on his mustache, narrating the ups and downs of his recent break-up. No. Dramatic-Irony is when the audience knows something that the characters do not. While you could argue that we all know the hipster looks ridiculous and he, well, doesn’t, you could also argue that it’s a matter of taste—not unlike the Pabst. But rather than get too involved with all the many sleights of hand in the trick of Dramatic-Irony, let’s look at a few other prime examples of Suspense.

Marquez’s introduction to Chronicle of a Death Foretold:

On the day they were going to kill him, Santiago Nasar got up at five-thirty in the morning to wait for the boat the bishop was coming on.

Or, from Dostoevsky’s The Brothers Karamazov:

Alexey Fyodorovich Karamazov was the third son of Fyodor Pavlovich Karamazov, a landowner well known in our district in his own day (and still remembered among us) owing to his tragic and obscure death, which happened exactly thirteen years ago, and which I shall describe in its proper place.

When we need to get some information to the reader (in this case, that information is the entire novel) we need to start with a pique of their interest. Michael Chabon, Pulitzer prize-winning author of The Amazing Adventures of Kavalier and Klay, uses Dramatic-Irony not just at the beginning of that novel, but all throughout.

In later years, holding forth to an interviewer or to an audience of aging fans at a comic book convention, Sam Clay liked to declare, apropos of his and Joe Kavalier’s greatest creation, that back when he was a boy, sealed and hog-tied inside the airtight vessel known as Brooklyn, New York, he had been haunted by dreams of Harry Houdini.

Just like Marquez and Dostoyevsky, Chabon has piqued our interest.  We want to know about Clay’s haunting dreams. We want to know, What was Kavalier and Clay’s greatest creation? We want to know how they become successful enough to be interviewed and surrounded by audiences. But in order to find all of these answers, there’s a catch.

And that catch is the rest of the novel.

Now, how do we use this trick smack dab in the middle of our show?

There are two ways Chabon uses it:

1. Primarily to get exposition and character built while building Suspense.

2. To inform our reader of exposition by inserting a scene of flashback that has its own arc, and provides Suspense for the central story-line.

On page 264 of The Amazing Adventures of Kavalier and Clay, Josef Kavalier is out walking in a park, excited about his dinner-date, and killing time until it arrives.

Just as he passed a statue of George Washington, he noticed a small group of people up ahead, gathered around one of the long green benches to his right” […] “they all seemed to be looking not at the bench but at the tall slim maple rising up just behind it, in a lacy iron cage […] There must, Joe thought, be some kind of animal on the tree, a mouse or a monkey or a monitor lizard escaped from the Central Park Zoo. He went over to the bench and, when no one would make room for him, pushed up on the tips of his toes to see.

At this point in the story, you want to see what’s on the tree. You’re as excited, and anxious, as Joe. Your eyes are up on their tip-toes, peeking over onto the next page.

And then you see it.

Not what’s on the tree.

Instead, you see an expanse of exposition.

A surprising fact about the magician Bernard Kornblum, Joe remembered, was that he believed in magic.

Joe goes on to ponder Kornblum’s belief in magic over the length of a paragraph. The paragraph builds character. It sets up a powerful image that will inform the rest of the novel. And it does all this while we’re chewing our nails because we want to see what’s on that tree. Finally, we do.

There was, on the slender bole of the youthful maple tree in its cage on the west side of Union Square, an enormous moth. It rested, papillating its wings with a certain languor like a lady fanning herself, iridescent green with a yellowish undershimmer, as big as that languid lady’s silk clutch.

This is a momentary pleasure-delay. It’s not a leap in time or place or character, it’s a logical leap related to theme. Perhaps more important than seeing the butterfly, we see Joe’s realization, as he’s headed for his date, that there is real magic in the world. This realization about real magic may help him find real love.

Next, we’ll look at the use of flashback to build suspense, and inform our reader of a scene’s context by inserting a scene of flashback that has its own arc.

In Chabon’s Wonder Boys, Professor Grady Tripp has arrived at the airport to pick up his editor, and friend, Terry Crabtree. At this point, we don’t know much about their relationship.

“You bastard,” I [Tripp] said. “How are you?”
“Unemployed,” he [Crabtree] said, looking no less delighted with himself.
I started to smile, but then something, a ripple in the muscle of his jaw, told me that he wasn’t joking.
“You got fired?” I said.

Their primary conflict in the scene is that, while Terry Crabtree faces impending unemployment if he cannot get a book published soon, Grady Tripp has been working on the same book for years now. Crabtree asks Tripp about this book.

“It’s fine,” I said.
He was talking about my fourth novel, or what purported to be my fourth novel, Wonder Boys, which I had promised Bartizan during the early stages of the previous presidential administration.

Soon, this conflict seems as if it’s coming to a head.

“Tripp,” said Crabtree. He looked straight at me now and held my eyes with his for as long as he could manage [...] “Is it really almost done?”
“Sure,” I said. “Of course it is. Crabtree, are you still going to be my editor?”

Crabtree says “sure”. But the reader gets the sense that the cards of conflict have been dealt, the bets made, and we’re dying to see the players show their hands. We’re dying to get to the next scene between Tripp and Crabtree. We’re dying to move ahead in the plot’s central storyline.

So, where does Chabon move us?

The next passage begins as follows:

“Crabtree and I met in college, a place in which I’d never intended to meet anyone.”

Following that are ten or so pages of the flashback, but they provide essential back-story. Essential, if not entirely to the plot, then to the deepening of our understanding of these two friends and their relationship, and to building the readers’ trust in that relationship. A fundamental part of any lie, from fiction-writing to card-tricks, is building up false-evidence.

The backstory also provides, more to the point, Suspense. Readers think they want to plow ahead through the story, but what they really want is to be teased. Chabon skillfully uses back-story to keep us reading  by providing a flashback with its own arc.

In this flashback, Crabtree and Tripp meet in a fiction workshop and hardly get along at all. But they bond over a shared interest in a writer no one else seems to know, and by the end of the section Tripp says:

It’s a nice and neat arc. And, just for good measure, at the beginning of the flashback Chabon tosses in a girl that the narrator, Tripp, is avoiding, and by the end of the scene Chabon has the girl dumping a pitcher of ice-water over Tripp's head.

Coincidence? I think not. A good insert of flashback has its own arc(s).

When we do return to the central story-line of Wonder Boys, it’s to a scene that fits within a logical progression in time from the airport, which is imperative to making this technique work. Readers want to be teased with scraps of story, but we don’t want to end up starved by being denied the main course for too long.

Now, if we use any technique too often it becomes obvious to the reader. We should avoid that the way the magician avoids performing the same trick twice for fear the audience will see he’s palmed the ace. But as long as our audience doesn’t catch us palming aces, we can be sure that they’re dying to see our next trick, and dying to read the rest of our story.

I love Michael Chabon. Not his work, the man.

And I want his hair.

His keynote at AWP a couple years ago was one of the highlights of my fanboy life.

Bret, if I'm reading that correctly, it has something to do with Chabon's being voted one of the top ten most beautiful people by Newsweek or somebody, no? Being balder now, I really want his hair. I think his description of Tripp's hair in Wonder Boys might have been a narcissistic nod, albeit one that knocked a plump lock of hair loose, to himself. Gordon, thanks so much! I was there too! Nice to run into you, in a way, again.