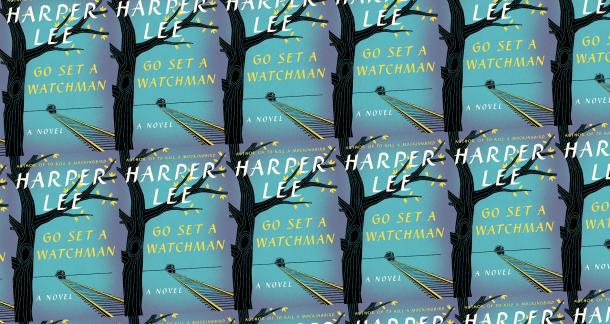 That girl...well, she wasn't wrong, not exactly. But she certainly wasn't right.

I went into my read of Watchman with blinders on. I didn't read any reviews. I avoided all columns/news/information about it. I wanted to go at it with fresh eyes — with my own eyes, unadulterated by other people's opinions.

In doing that, I succeeded. I sat down and cracked open the book one day over the summer, and I started to read. I finished the book the following day, a marathon reading session shadowed by a need to just get through it. I didn't enjoy the experience. I'm heartbroken, but only slightly. Here's why.

And please note: there be spoilers in this here column...and I don't even feel bad about it. I think you deserve to know what you're getting yourself into, as soon as you pick up Go Set a Watchman.

First: Do I believe that 'Go Set a Watchman' was written before 'To Kill a Mockingbird'?

And does that question even matter?

I'll be honest. It was a question that bugged me before I picked up the book. Was Watchman the novel written before the world-famous Mockingbird ever came into being? Was it the book that, in fact, sparked Mockingbird's writing, as the story goes?

This mattered to me for a couple of reasons.

By page 13, the answer was clear. Watchman was written before Mockingbird. As such, I was owed nothing. I received it.

On page 13 (such an unlucky number; was this done on purpose? Of course not.), Lee wrote:

Just about that time, Jean Louise's brother dropped dead in his tracks one day, and after the nightmare of that was over, Atticus, who had always thought of leaving his practice to his son, looked around for another young man.

No writer who wrote with such love, such tenderness for a character like Jem Finch could have killed him with such unabashed callousness. No. The Harper Lee who wrote Mockingbird couldn't have killed Jem with so few words. The real Jem, the Mockingbird Jem, deserved so much more.

Of further evidence: nowhere in the book is Boo Radley mentioned. Dill Harris is a whisper of a character, an old friend gone to Europe, never to return. Facts are mistaken (in Mockingbird it's made clear that Tom Robinson's case was assigned to Atticus Finch; in Watchman, there's mention of Atticus "taking the case on" of his own accord). The beloved Calpurnia scorns the Finch family.

Why wasn't it published right after 'Mockingbird,' then? ('Mockingbird' being such an overwhelming success and all that.)

To Kill a Mockingbird became a book that defined a generation. It defined the great American novel, and even an entire geographic region.

Go Set A Watchman will never be that. It would never have been that. Had it been published right after Mockingbird, it probably would have flopped. The words "sophomore slump" would have been hurled at Lee's feet. And worse, Watchman could have taken away from Mockingbird's success. Its reach.

Watchman is the work of a younger, less experienced writer. The voice of the narrator is, at times, pure Scout Finch. Those moments are genuine and lovely. But sometimes, often, the narrator slips into this James Joyce style (ish) stream of consciousness writing that makes little to no sense. Or babbles on and on and on...you get the point.

The writing of Mockingbird is tight. Each chapter, especially in the first half of the novel, stands on its own as its own complete story. There's the chapter about the first snow in Maycomb, and Maudie Atkinson's house burning. There's the chapter about the rabid Tim Johnson. The chapter about Mrs. Dubose and her fight against morphine addiction. These chapters flow together to lead up to Tom Robinson's trial, creating a fleshed-out, three-dimensional portrait of a small, sleepy town, and a picture of racism and classism in an economically depressed society.

In Watchman, I think Lee was trying to do that for the 1950s. She had the basics there: that same sleepy town, though less fleshed out. That same tension between black and white. She was just nowhere near as successful, and relied on those tricks new writers use to convey emotion. Scout Finch (called by her formal name, Jean Louise, throughout) vomits copiously, as a reaction to all sorts of stimuli. Find out your boyfriend belongs to an organization that works with the KKK? Puke. Find out your dad is, too? Retch. See your old home, without any of the pieces that once marked it as yours? Vomit your brains out. It's a crutch, vomit. We've all done it. My first novel was full of puke. So much puke. All the puke. But we writers, as we write...we learn. We learn to let go of those crutches, those tricks, those knee-jerk reactions. Because there's always a better way.

Watchman, perhaps, in the hands of a really good editor, could have become closer to what Mockingbird became. I don't know, of course, what the early drafts of Mockingbird actually looked like.

But it seemed to me, as I read through Watchman, chewing on my fingernails and wishing for it to be better, that there was not much editing here. Someone said, "Here are words! Words by Harper Lee! Let's publish them!" And no one thought to take a look to see if they worked.

No. No. It's not all bad. There were two things about Watchman that I loved.

First, as I said above, there were glimmers of the true voice that would become the "real" Scout Finch. Mostly these came about when the narrator left her main story line and digressed into stories of her misguided teenage years. There's a story about a dance, a dress, and a pair of fake boobs that'll make you die laughing. It's Scout Finch, through and through, and a picture that makes you say, "YES! This is what I wanted! This is what I needed! Thank you, Harper Lee. Thank you for this. At least, for this."

And also, there was this: much of Watchman follows Scout...ahem, Jean Louise (ugh) as she learns that her father, Atticus, isn't as perfect as she once found him. She must learn to form her own moral opinions, without him, and to stand with them — even to stand up to him, when he claims to believe segregation is right. Segregation is good. When he claims to believe the "Negro race" to be an inferior one, one not yet civilized enough to stand together with white men and women without upheaving the quiet gentility of the South.

The claim is bunk, of course, to you and to me and to Scout...ahem, Jean Louise. The claim he makes is heart breaking, for if there is one piece of Harper Lee's original work to which we've all held firm, it is this: Atticus Finch is perfection. Moral. Strong. Calm. A literary god, an idol to be worshipped on high.

But as Jean Louise (ugh) struggles to come to realize that her father is human, so, too, do we as readers have to come to the same realization. There should be no literary idols. There should only be characters that are as real (and as flawed) as you or me. The pedestal on which Scout Finch held Atticus came crashing down with these words:

She stepped aside to let him pass. She followed him to the car and watched him get laboriously into the front seat. As she welcomed him silently to the human race, the stab of discovery made her tremble a little. Somebody walked over my grave, she thought, probably Jem on some idiotic errand.

Scout discovered her father's humanity, and so do we. The pedestal on which we've held Atticus FInch comes crashing down around our ears.

There should be no literary gods. No one is unflawed. No one is perfect.

Not even Atticus Finch.

So no. Go Set A Watchman isn't To Kill A Mockingbird, not by any stretch of the imagination. When a friend asked me if she should read it "just for fun," I had to say no. It's just not...pleasure reading, if that makes sense. Nor is it literary enough (read: well-written enough) to be worth it, to stand on its own.

But as a glimpse into a less mature Harper Lee, one with a startling precognition for what would become of Mockingbird and Atticus Finch, it sure was an interesting tale to read.