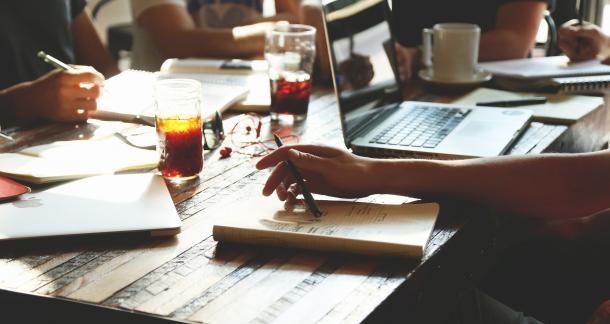 We’ve all been in a workshop where that one wretched member had us conspiring to “dissolve” the workshop and then re-form without telling them. We’ve all done the thing where we allow and disallow booze. We’ve all had the rules about length and continuing stories, all of which are violated in a fashion usually reserved for exploitation horror movies.

There are lots of great ways to ruin a workshop.

But there’s something that wrecks your workshop in a sneakier way. Something I didn't know about until I was lucky enough to workshop with Chuck Palahniuk and Lidia Yuknavitch (and 20-some super talented writers) earlier this year.

Now that I know about crosstalk, I can't stand it. It's like that high-pitched noise you didn't notice at first, but as soon as you did, you couldn't stop hearing it.

If there's something killing your workshop, something you can't quite identify, I'd put money on it being crosstalk.

Crosstalk sounds like some kind of electronic board game from the early 90’s, which would probably have a very cool commercial that takes place in some kind of laser volcano. 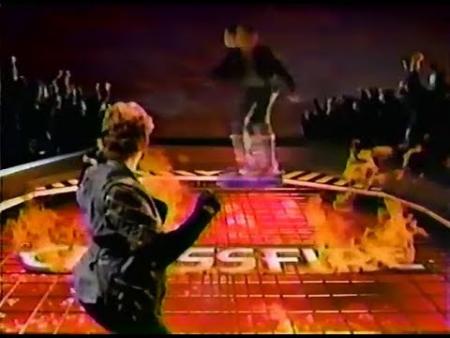 Sadly, crosstalk is not nearly that cool, and it has nothing to do with volcanoes. Or lasers.

Person A reads a piece in workshop.

Person B gives feedback on the piece.

The short version, crosstalk is feedback that’s focused on other feedback more than it is on the original piece.

How Is This A Problem?

I know a lot of you are probably disagreeing with me right now. Probably saying something like, “But sometimes someone gets a bad piece of feedback!” or “That’s helpful information you’re talking about!”

If you’re saying that, I’d encourage you to take a deep breath, stop being defensive, and read. Just read on and see if things make more sense.

It’s Disrespectful To Your Fellow Writers

When someone brings a piece to workshop, their piece should be workshopped. It should be the primary topic of discussion during the time devoted to it. When we’re talking about each others’ feedback, we’re not talking about the original piece. This is intensely disrespectful to the person who brought in their work and shared it with everyone.

This is not the time to school your fellow workshoppers by giving the best, most insightful feedback.

Give your fellow workshop members the time and attention they deserve.

Crosstalk Causes Us To Focus On Pointless Details

I once listened to a podcast where two movie critics talked about E.T. They spent a ridiculous amount of time arguing over whether it makes sense for Elliott’s mom to have Coors in the fridge:

Critic A: It doesn’t make sense. Why would she have Coors?

Critic B: I don’t know. Maybe she bought it for someone else or had a barbecue or something.

Critic A: It just doesn’t seem like a type of beer a single mom in the 80’s would drink.

This went on WAY too long.

If you engage in crosstalk, you’ll spend an hour going back and forth over the brand of beer that would make most sense for a character to have in the fridge. And pretty much ignore an entire movie about a space alien that befriends a boy and goes through a traumatic medical horror.

Crosstalk can easily turn to spending time on shit that doesn’t matter. It’s how you end up having those ridiculous discussions about the color of a character’s nail polish or the Midwestern state they hail from, but the real issue is that the story is a structural nightmare with no ending.

What If The Reader Takes A Piece Of Bad Feedback Seriously?

It's entirely possible that you see crosstalk, when YOU do it, as a positive thing. That you're rescuing another writer, preventing them from taking bad advice to heart.

Create your feedback, give it to the writer, then shut up.

I’m going to say this is an unlikely outcome and not something to worry about.

When you’re getting feedback on a piece, don’t you mostly just absorb whatever’s thrown your way, and don’t you, later on, decide that some of it is on the money and some of it is bullshit? And don’t you think that the others you work with can do the same thing? Isn’t that why you’re working with them?

There are the occasional inexperienced writers who come about, and yes, they might need a little help. But to be honest, if you’ve got someone in your group who is constantly offering bad advice, you should consider how you might help THAT person give better advice as opposed to stopping others from taking their advice. If you've got a leaky roof, you don't protect your floor by buying a bunch of buckets. You fix the damn roof.

Why Is This Better?

First, feedback without crosstalk is better because you'll provide fresh takes on stories. You'll talk about how they hit you and what stuck out as important.

Second, you'll avoid confusing the writer. If Person A says "I want more description of the room" and Person B says the opposite, these two pieces of feedback create discussion in the group, but later that night the writer will get home and figure out they didn't learn much about their piece.

Third, a good writer brings something to workshop because they want to know how readers will react. Average readers will not sit around and discuss the piece with other readers. They don't read with that in mind. They will pick it up, and if you're damn lucky and damn good, they'll finish it. Your feedback should be oriented that way as much as possible, towards discussing the piece as it would likely be experienced by a casual reader, not towards creating discussion and debate in the workshop.

How You Can Avoid Crosstalk

If you think you might be engaging in crosstalk, it’s easy to eliminate it from your feedback.

Listen to or read the story, come up with your feedback, and then give it. That’s it.

Don’t jump in on what someone else says. Don’t change what you were going to say after you hear everyone else. Create your feedback, give it to the writer, then shut up.

How You Can Banish It From Workshop Entirely

To make this work, you kind of have to be in charge, or you have to be with a group that’s open to the idea of eliminating crosstalk. But if you get there, it’s simple.

It’s a practice, and it takes some getting used to. But if you’re in a workshop, I recommend giving this a shot. Go one round (however many weeks that takes) trying this out. Be strict about it at first. See if you leave with better feedback.

Oh, one other thing, someone has to be willing to enforce the rules.

I suggest you buy a name placard, something like this: 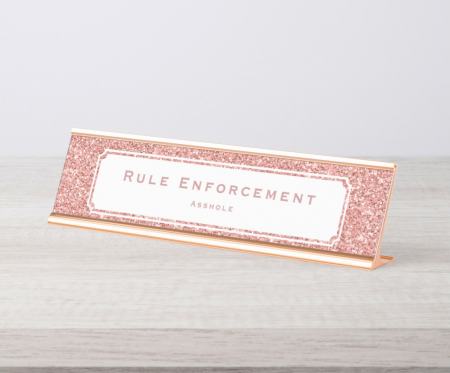 Then you designate one person to kill crosstalk at every meeting. The placard reminds everyone it’s nothing personal if you have to be reminded to avoid crosstalk. It's not that Steve from workshop hates you. It's just his turn to be the asshole.

Ronzermonster from Portland, OR is reading Forture Smiles September 20, 2018 - 8:11pm

Gee, I wonder what inspired this article ;)