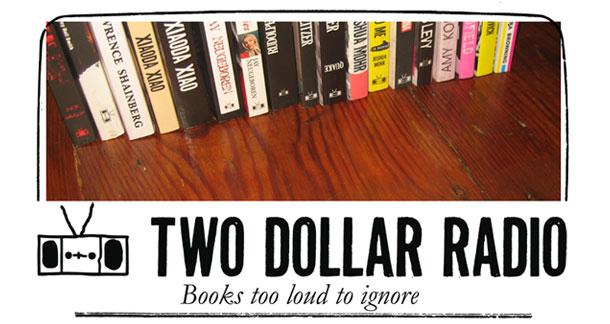 The first Two Dollar Radio release I read was The Orange Eats Creeps, a stream of consciousness non-narrative about Slutty Teenage Hobo Vampire Junkies run amok in the Pacific Northwest. I'd purchased the book based solely on the Twin Peaks comparisons and Steve Erickson's glowing intro, and it turned out to be the beginning of a beautiful friendship. I would go on to interview Creeps author Grace Krilanovich for The Cult, as well as read and/or review several other Two Dollar titles: Seven Days In Rio, by Francis Levy, a re-imagined Interzone of psychoanalysis and prostitution where all woman are (literally) whores; Damascus, by (LitReactor instructor) Joshua Mohr, in which a cancer patient, a prostitute, and Santa Claus walk into a bar; and Radio Iris, by Anne-Marie Kinney, which Steve Erickson called 'a novel of unsettling humor and elusive terror, a piercing loneliness and the strangeness of the banal.' (Apparently, I'll read anything you slap Erickson's name on.) On top of that, I also have a number of other Two Dollar titles hanging out in the reception area of my To Read pile, patiently waiting their turn. It's kind of like the afterlife waiting room in Beetlejuice.

Oh, and if you don't experience a surge of excitement at the possibilities contained within these synopses, I hate to be the bearer of bad news, but you like boring books.

Two Dollar Radio was founded in 2005 by Eric Obenauf and Eliza Wood-Obenauf, a husband and wife team railing against the publishing status quo. Inspired by Andre Schiffrin's The Business of Books, the indie upstarts set out to 'reaffirm the cultural and artistic spirit of the publishing industry... by presenting bold works of literary merit, each book, individually and collectively, providing a sonic progression that [they] believe to be too loud to ignore.'

Books too loud to ignore.

If you shout it from the rooftops long enough, eventually someone's going to listen, right? Either that, or they'll start throwing shoes. Which, I guess, is good if you are in need of shoes.

But first they needed a name. According to their website, the moniker Two Dollar Radio has its origins in a harbor bar located in San Diego. Eric was a bartender at the time, and was doing his best to ignore the rich old drunks attempting to regale him with tales of the day's sailing. But rich old drunks don't take kindly to being ignored. One man who was feeling particularly ornery took exception to the lack of attention and blurted out, “Don’t mind me, I make more noise than a two-dollar radio.” It was probably the best tip Eric ever got.

Armed with a suitable name, the Obenaufs began to make their own noise. They started with Eric's novel, Can You Hear Me Screaming? (appropriate title, no?), which was published as an eBook and sold just 300 copies. Humble beginnings, sure, but things would improve. Their first big break came in the form of Rudy Wurlitzer, the American counterculturalist behind cult experimental novel, Nog, and the screenplay for Monte Hellman's Two Lane Blacktop. He entrusted them with The Drop Edge of Yonder, his first new novel in twenty years, instead of taking it to the major publishers. From Eric's description of their first encounter:

I remember the first time I met Rudy Wurlitzer, chatting across couches in the basement of a townhouse while Philip Glass railed on the piano in the room directly above us. I carried everything around in my backpack and didn’t know what I was doing. We didn’t even have a distributor for our books at that point. Looking back, it’s incredible that a writer of Rudy’s stature took a chance with us.[1]

From there, progress has been slow and steady. In 2009, Joshua Mohr's Some Things That Meant The World To Me was named one of O magazine's 10 Terrific Reads, and in 2010 The Orange Eats Creeps become their best selling title with over 7,000 copies sold. They are currently putting out around five to six novels a year, and plan on expanding into other ventures, including a non-fiction journal called Frequencies, of which Eric told me:

We're billing it as a grungy, less self-righteous Harper's. Here's the tagline: 'artful essays that challenge the current non-fiction prescription.' First issue has Joshua Cohen writing on the origins of the phrase 'Open Sesame,' Blake Butler on loose memories and the disintegration of the mind, Tracy Rose Keaton on groupie-dom and consumer culture, an excerpt from Scott McClanahan's Crapalachia, and an interview with Anne Carson. An artist by the name of John Gagliano is going to do original work for each issue's cover, and illustrate each essay, so it should look really sexy.

But Two Dollar Radio is more than just shiny artwork and sex appeal. Two of the biggest contributing factors to their success are their adventurous choice of material and their enthusiasm for the written word. Obenauf believes in publishing work he is passionate about, and acknowledges a preference for “dark, gritty, grungy and esoteric” stories told in a distinctive narrative voice:[2]

[We] operate under the Field of Dreams principle, which is 'if you build it they will come.' If you publish stuff just cause you believe it'll sell well, then it probably won't. I am still firmly convinced that all you can really do is keep your head down and champion work that you believe is indispensable. That passion for the work rubs off on people, from the sales reps to the booksellers, from the review editors to the readers.

Add to that the current state of the publishing industry, and it is a great time to be an indie, as well as a reader:

We are entering a new golden age of publishing thanks to the resurgence of small presses. I'd much rather be a reader now than 10 or 15 years ago. I'm reading a book now that is absolutely blowing my mind. It's by Seb Doubinsky and called Goodbye Babylon, published by Black Coffee Press. And before that, I read a really fantastic novel called Green Girl by Kate Zambreno, published by Emergency Press. These are both offerings from presses started in the past couple years that are contributing to a new and vital literary culture. It's because small presses possess that hard-headed belief, championed by folks like Barney Rosset and John Martin, that literature can still inspire and inform culture. The big publishers have forsaken that line of thought, intent rather to permit trends in popular culture to dominate their programs. It's steering them toward obsolescence and it's painful to watch and I wish it'd just be over so the rest of us could get on with the heavy lifting already.


The truth is, I couldn't prescribe a more functional way to operate than the small press model. The industry at large is in chaos, and it's splintering. Part of it might be eBooks, but I don't believe that's really it. I think that the internet has fragmented society into so many parts that it's easier to reach a niche audience now, but much harder to achieve any form of mass commercial success. So big publishers are freaked out because they lack that brand magnetism and direct connection with readers because of the sheer glut and absurd variety of stuff they produce. The direct-to-reader appeal is something in particular that Richard Nash mastered at Soft Skull and is nurturing now at Red Lemonade. The best way to succeed now in the publishing industry will be to find alterative ways to creatively subvert the publishing industry at large.

Two Dollar Radio and their fellow indies are proof positive that you can achieve that success without pandering to trends. It may not always be a monetary success, but money's obviously not the main motivation here. Eric and Eliza Obenauf publish books for love of the game. And as previously mentioned, their passion for what they do is infectious. In fact, they've inspired such a loyal following, that the Two Dollar Radio Tattoo Club is now 19 strong and counting. Sure, getting their logo permanently etched into your skin entitles you to a free lifetime subscription to every book they publish, but it's still a huge commitment. You wouldn't get a Kellog's tattoo for a lifetime supply of Frosted Flakes, would you?

If you're not the type to jump head first into the deep end, or aren't willing to sacrifice a Jewish burial to the gods of literature, why not head over to the Two Dollar website and pick up a book or two? You can even purchase an annual subscription package for a mere 50 bucks. I've foregone posting any amazon links to honor the publisher's request to Buy Indie!, so get out there and support a company that is putting out some amazing reads.

Class Director
Rob from New York City is reading at a fast enough pace it would be cumbersome to update this May 30, 2012 - 9:16am

This is great. I was a big fan of Nog and Drop Edge of Yonder. Also, there is an incredibly high chance I might do this tattoo thing. What's one more, especially if it means a lifetime of cool books?

Unless the company goes under, but then I guess it's still a cool tattoo...

Good illumination on a great press. They put out beautiful books.

Such a cool press. I might join this tattoo club as early as this weekend. I had no idea about it.

Also, why are all of their book covers so amazing?

Joshua Chaplinsky from New York is reading a lot more during the quarantine May 31, 2012 - 6:08am

Thanks for reading, guys. I urge anyone who hasn't to check out their catalog and see what they're about.

Oooh, this is a good writeup. I've been intrigued by their titles before, and this heightens the interest.

I'm going to order some of this stuff.

Love these guys. I've also read ORANGE and DAMASCUS, two really great books—I reviewed and talked about them both at The Nervous Breakdown. They have a great attitude, and I support them however I can. I got the opportunity to read with Mohr here in Chicago and he's a really nice guy. Met Eric too, also very nice. So, the next time you have a spare $20 sitting around, pick up something by them. One of my favorite small presses. (And yes, even though they passed on Disintegration, I don't hold it against them) :-)