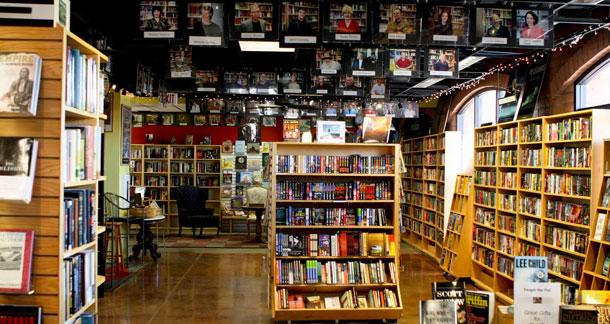 FOOD/DRINK: Event coordinator/webmaster/social media quru/guy who never seems to sleep Will Hanisko likes his beer and has zero beef busting out local brews for author events. Also, owner Barbara Peter’s is pretty big into bringing in cake/cookies/brownies to get the crowd sugared up.

HISTORY: Founded in 1989 by Barbara Peters. Barbara has won the Raven and Quill Awards from the Mystery Writers of America (and has been nominated for an Edgar for Best Biographical Work) and is a Bouchercon Fan Guest of Honor and Lifetime Achievement honoree. She’s also the Editor-in-chief of Poisoned Pen Press.

THE NEIGHBORHOOD: The Poisoned Pen is located in downtown Scottsdale’s art district and is within easy walking distance of dozens of galleries, restaurants, bars, etc. It’s basically the neighborhood you take out of town friends and relatives to when they come to visit Phoenix during the winter. It’s also the part of town where Mrs. Rawson and me head to when ever we don’t have our five-year-old in tow and don’t give a shit about the cost of our dinner.

WHY IT’S AWESOME:  First and foremost, The Poisoned Pen has become the destination for authors to sign at in the Valley of the Sun. (Although Changing Hands in Tempe and The Velma Teague library—better know as just The Teague—in Glendale manage to attract quite a few authors as well.) The store hosts author events 5 days a week, ranging from national bestsellers such as Michael Connelly and Kathy Reich to up-and-coming authors such as Hilary Davidson and Patrick Dewitt. And no matter the size of the event (such as ones featuring Connelly and Reed Farrel Coleman, where it was packed so tight with fans you could barely move) the store still maintains an intimate feel. The Poisoned Pen also sponsors a few book clubs, including the Hardboiled Bookclub, led by renowned writer and editor—and longtime Poisoned Pen manager—Patrick Millikin. (Patrick also hosts the bulk of the Poisoned Pen’s events)

The store’s atmosphere is basically like walking into a really tidy book nerd’s living room. (I say this in the nicest way possible, because, hell, I wish it was my living room.) The shelves and display tables are jam packed with signed books in every price range. And although the store has a wide range of titles and genres, it specializes in crime fiction and the loyal staff is more than willing to provide recommendations and talk up their favorite authors.

VERDICT: Let’s put it this way, if Barbara ever decides to retire, I’m going to try and talk Mrs. Rawson into buying the store just so I can hang out there every day.