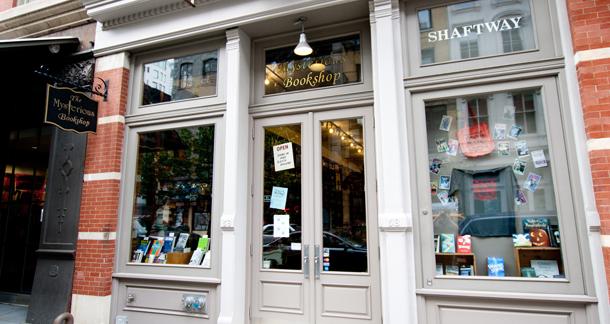 FOOD/DRINKS: During signings/special events only

HISTORY: The store opened in 1973 in Midtown Manhattan, before moving to Warren Street in TriBeCa. The owner is Otto Penzler, an editor of mystery fiction and an authority on the genre. He’s won two Edgar Awards, the Ellery Queen Award, and The Raven, the highest non-writing award from The Mystery Writers of America.

THE NEIGHBORHOOD: There are plenty of reasons to visit Downtown Manhattan (New York Stock Exchange, Ground Zero memorial, Statue of Liberty, Staten Island Ferry), but it's not the most popular destination for staying and wandering. Still, there are some cool bars and restaurants tucked away (go visit the second floor of The Patriot and thank me later).

WHY IT’S AWESOME: The Mysterious Bookshop is a small joint, basically a giant box lined to the high ceilings with books. The focus is mystery fiction (duh), and while that may seem a little narrow at first blush, there's actually a great deal of depth to the selection. They've got pulp, hard boiled, noir, thriller, espionage--everything from Agatha Christie and Dashiell Hammett, to newer stuff like Richard Kadrey and Haruki Murakami. There's an entire wall dedicated to Sherlock Holmes, and even some comic books mixed in. (Marvel Noir? Cool!).

As an aficionado of the hardboiled and noir genres, I was thrilled to find that the store consistently stocked books I had a hard time finding elsewhere (Jim Thompson? Thank you very much!)

Even if you're new to the genre, or just looking for recommendations, the staff is incredibly knowledgeable. Just recently a friend of mine asked me to find books that were "Southern gothic by way of New England by way of Shirley Jackson." They didn't even bat an eye, just gave me a handful of recommendations.

The store includes a mix of new fiction and used books, but one of the coolest aspects is that authors are constantly coming through to sign the stock of their books, which are then sold at no additional charge. (Recent visitors? Colson Whitehead for Zone One and Chuck Palahniuk for Damned).

And if you're a rare book collector, you're in for an even bigger treat. Like, have you ever wanted to own a publisher's dummy of The Postman Always Rings Twice by James M. Cain? You can get it at The Mysterious Bookshop. Sure, it's $8,500, but it's also the only copy known to be in existence. And really, how cool is that?

The store also does special events, and due to its smaller size, they're a bit more intimate than the stampedes at the Barnes & Noble in Union Square. Christa Faust and Lawrence Block were in recently, and it was nice to chat them up a little, instead of having to hand over my book for a signature before being pushed through the line.

VERDICT: The Mysterious Bookshop is like a temple for lovers of crime fiction. But even those unfamiliar with the genre can find something to love. Definitely worth a visit.

Full disclosure: I work at—but not exactly for—The Mysterious Bookshop. Penzler has launched an eBook imprint, Mysterious Press, which is republishing classic works of crime, mystery and suspense fiction in digital reading formats. I’m moderating the website for the press. I was a loyal customer of the store long before I got the job, and my association has only enhanced my understanding and appreciation.

Oh, I think I've been there. It was amazing.

I have to hit this place up. Will probably be going there this weekend.

cristina from Tucson, Arizona is reading The Peripheral by William Gibson November 15, 2011 - 9:40am

awww! one of the things that makes me miss new york. love little bookstores like this and SO glad to see you're giving them some love.

been dying to see the Ground Zero Memorial !!!