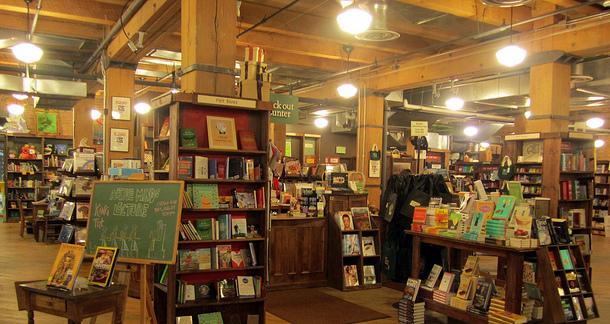 FOOD/DRINK: Tattered Cover Café is “hugely community driven”, carrying local brands of drinks and baked-goods. “If we like it, we’ll support it,” says Chelsea, a barista who loves books so much she’s got a different letter of the word, “Books”, tattooed onto each finger of her right hand. It’s that kind of place—hip to its core, while also resonating with the general public. An elderly couple exits, grinning at the bright day. “It’s a great old building,” the woman says to her husband, apropos of nothing, “and they got some good-looking cookies in there, too.” Not to worry, those with special diet-requirements, Tattered Cover Café also offers numerous vegan and gluten-free options.

Just about anything, used or new, that's available in their store is also available through their website.

HISTORY: Tattered Cover Book Store has grown over forty years, from its original 950 sq. feet in Cherry Creek to its current three locations in the greater Denver Metro area. Its atmosphere and vision come not only from its enthusiastic employees (ask any one of them and they’ll say they love it, and most have been working there for years) but are rooted in its ownership.

Owner Joyce Meskis is the recipient of the William J. Brennan, Jr. Award for the Protection of Free Expression given by the Thomas Jefferson Center in Washington D.C., the PEN/Newman First Amendment Award from the PEN American Center in New York, and The Author’s Guild of America Award for Distinguished Service to the Literary Community—to name just a few.

THE NEIGHBORHOOD: Located in the restored Morey Mercantile Building. Near Union Station and just blocks from Coors Field. The location I visited is in The Lower Downtown Historic District, known around these parts as LoDo. Just outside the Tattered Cover’s main doors, history lives on in the view of Union Station and the old Icehouse warehouse. The scene manages to balance both the hip and the commercial. It’s a strut away from the bars and a free shuttle to the 16th Street walking mall. The Tattered Cover is also convenient to get to, located right outside Regional Transit-Denver’s Market St. Station. 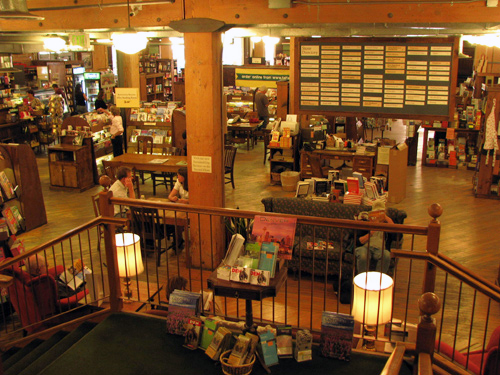 WHY IT’S AWESOME: With a vibrant offering of panels, conferences, and readings from the likes of National Book Award-winner Joan Dideon, Pulitzer-Prize-winner Michael Chabon, and (the week I visited) the first and only winner of both the Pen/Faulkner and the Pulitzer-Prize in one year, Richard Ford (for Independence Day), Tattered Cover’s events calendar is tough to pass up.

Hardwood floors invite a meandering pace around the two stories of books, and this, along with the checkout counter in the heart of the store instead of at the entrances and exits, makes you feel like you’re somewhere art resides—that the books’ existences matter more than their salability. Nook-like sections abound, filled with cushy reading chairs, desks, tables, and even diner-style booths, so that the homey/café feel isn’t limited to one area, but sprawls to unexpected corners and side-rooms. One nook offers couches, a coffee-table, reading lamps, a divan—all beside the warmth of a working fireplace—but don’t let the classic appearance fool you. There’s Wi-Fi, and it’s free.

If you have come to buy books, and not just to write or to study (one feels welcome to do either), you’ve come to the right place. The store carries a wide range of titles in all genres, and even dedicates shelf-space to local Rocky Mountain authors. In fact, the store has just widened its range in the last five months by joining only twenty stores in the U.S. to offer instant fulfillment for customers wanting out-of-print or out-of-copyright books, including any of Harper Collins’s backlist of over 4,000 titles. Tattered Cover Press, a press that customers can watch in-store as it prints either the book they’ve purchased or a book they’ve written (which the store will carry and promote), is the only press of its kind in Colorado.

VERDICT: A patron gave his verdict, saying, “I love bookstores. And I’ve tried them all. This one’s my favorite by far.” And Dennis Tyler, who runs the used-books portion of the store, explains a lot about why customers feel so at home here. He says, “I’ve been working here for twenty-two years, and I’ve never had a day I felt like I was coming to work.”