I’d Rather Talk to Hitler Than to Jesus: The Importance of the Bad Guy in Your Story 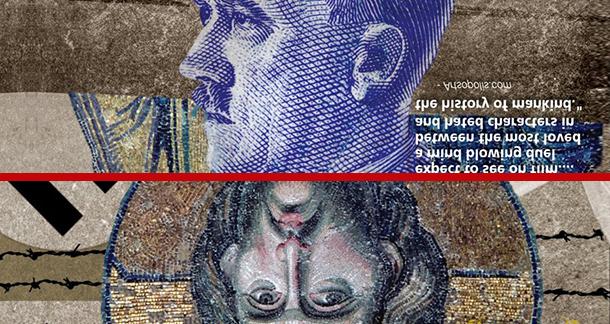 Who would you rather invite to dinner – Jesus Christ or Adolf Hitler?

Except for the fact that Hitler was a vegetarian and I couldn’t serve my go-to dinner dish of beef chili, I’d go for Adolf as a dinner companion every time. I know what makes Jesus tick. I know what Jesus would do. What I want to know is what in all holy fuck made Hitler think that killing 6 million people was a good idea and trust me, if I ever got the chance to break bread with him, somewhere between the main course and dessert, the small talk would cease and the hard questions would commence.

I’d rather talk to Hitler than to Jesus because bad guys are more interesting than good guys, and when it comes to literature I’d rather read about them too. As you do the background thinking for your next fiction project (because you do think before you start writing, don’t you?) consider the role of the bad guy in your story. Get the wrong right and you can’t fail to create a compelling narrative.

I know what makes Jesus tick. I know what Jesus would do. What I want to know is what in all holy fuck made Hitler think that killing 6 million people was a good idea.

First off, remember that bad guys can also be bad gals. Since the demise of the femme fatale in the 1950s, we’ve gone through a long period of women’s roles in non-romantic fiction being limited to 1) the victim 2) the friend of the victim. The success of Gone Girl, while depressingly reliant on our cultural belief that a woman’s sole purpose in life is to make her husband miserable, suggests that we’re ready for a shift in the zeitgeist. Women can be evil too – take Claire Underwood from House of Cards as an example. She’s just as scheming, power hungry, ruthless and manipulative as her husband Frank, and a shining example of how the balancing principle of good vs bad in your narrative can actually also work as bad vs worse. We’ll talk more about that later, but for now the thought to take away is that you should not restrict your choice of baddie to the few tired tropes we see trotted across our screens and pages (I’m looking at you DC comics) with deadening regularity.

So if making your baddie a black guy in a purple velvet pimp suit or a white guy with goatee and British accent might not be the wisest choice, what can you do instead?

Anything, so long as it plays in some way to your theme. Writing a murder mystery set in a Brooklyn microbrewery? The stage is set for the first ever hipster-baddie in history. The key point here is motivation. Whatever your protagonist wants, your antagonist must also want, or must want them not to have. Be creative about who might want to oppose your protagonist and why. This may require you to walk away from the most standard forms of conflict (for example: saving the world vs destroying the world – I’m looking at you again DC comics), but it will mean what you settle on has an important element often missing from fiction: originality.

Opposing forces must be equal and opposite

Falling into the trap of caricature is especially tempting when it comes to writing antagonists because we often see them as no more than narrative devices – the force against which the main character has to struggle. Those of us who have crept along the writing achievement scale from Utterly-Shit to Not-Quite-So-Shit have learned that creating a main character our readers can root for – well rounded, believable, admirable – counts. If we have any sense, we expend much time and effort developing such a character. What we sometimes forget to do is expend as much time and effort on everyone else involved in the drama.

There’s a simple principle which underlies our understanding of how the physical world behaves and it goes like this: for every action there is an equal and opposite reaction. This is also known as Newton’s third law of motion, and it helps to explain many things, such as why guns recoil, how fishes can swim and why punching someone in the face hurts your hand as much as it does their face (don’t try this at home).

Newton’s third law also applies to fiction. If you want your story to gain traction, your protagonist must meet resistance as they attempt to achieve their goal. Allowing them to glide smoothly through the narrative is one of the biggest, most fundamental mistakes that a writer can make. But for resistance to work it has to obey Newton’s law – it has to be not only in opposition to the protagonist, it has to be equal in size.

This means that your antagonist has to be created with as much care as your protagonist. Avoiding clichés is the first part of this process, but that’s only a beginning. Take a look at a really well-written baddie and you’ll see instantly what I mean. Thomas Harris, for example, excels in creating the perfect anti-hero. His serial killers have reasons for what they do. They feel love, pain, longing, disappointment (lots of disappointment, especially Lecter. People are always a big disappointment to Hannibal). One of the factors that makes Harris’ stories so compelling is that the forces opposing his protagonists, Will Graham or Clarice Starling, are at the very least equal to the protagonists themselves, if not slightly greater. This gives the narrative the momentum it needs for us to keep turning the pages, because although we think the story might end well, the sense of equal and opposing forces eats away at that certainty and makes us anxious to find out What Happens Next.

Newton’s third law of fiction comes with an important caveat. One conclusion from the dictate of opposing and equal forces might be that creating as much moral distance between protagonist and antagonist as possible is bound to work. If your baddie is really bad – a baby-eating, bunny-violating monster (who also happens to love their mother, remember we’re creating well-rounded baddies here) – then by the principle of equally opposing forces, your goodie must be really good.

Let’s rain a thousand nopes upon that idea. The square-jawed hero who never entertains an impure impulse is about as interesting a concept for fiction as the outcome of the Little Bletherly Annual Crochet Competition. I mentioned House of Cards above as an example of how Bad vs Worse can propel a story. In HoC the oppositional dynamic is largely provided by the relationship between Frank and Claire Underwood. Yes, Frank occasionally meets some opposition to his Big Plan to Take Over the World, but he generally deals with this attempts to stop him in the manner of Godzilla overturning a cop car with one flick of his mighty claw. The only serious challenge to Frank’s progress (this is a man who’s up and walking the same day he has a liver transplant fer cripes sake) takes the form of his wife, Claire and far from being the moral centre that Frank lacks, Claire is just as ambitious and prone to forgetting that the ends do not justify the means as her husband. The joy of watching HoC does not stem from waiting to see if Good will eventually overcome Evil, it’s from waiting to see which of two entirely corrupt individuals will win. At the end of S4, Claire and Frank have put aside their weapons and entered into an uneasy partnership. Everyone who follows the series knows that this entente will last about as long as a mongoose and a cobra setting up house in a very small bag. We’re anxiously waiting for S5 to see which of the two of them kills the other first.

The lesson here is that you don’t actually need a moral centre for your narrative to work. Neither your protagonist nor antagonist have to have their heart in the right place, or even happen to possess a heart at all. Readers can be persuaded for just about anyone, so long as that person is interesting and has some justifiable motivation for their acts. What grabs us is the battle, not necessarily who’s fighting it.

Don’t be frightened to let the bad guy win

Even if you do create a story where one of the characters clearly has some moral advantage over the other, don’t feel bound to let that character come out on top. Sometimes life is hopeless, sometimes the bad guys win and you could argue that, rather than handing us pretty lies about the way the world works, the best fiction doesn't dodge harsh realities. Personally, I prefer a book which ends on a dark note, not simply because that’s more realistic, but because it provokes more thought. I’m prompted to revisit the story, over and over again, compelled to search for ways the outcome could have been different, or to convince myself that this is the only way the narrative could end. I enjoy the shock of having my expectations perverted. For me, an unhappy ending is the literary equivalent of bungee jumping. Suddenly there’s nothing under my feet and I’m falling. Many people want a safer ride when they read a book, but I’ve never been a fan of safety.

The title of Master of the Dark Ending (and feel free to disagree with this assessment in the comments) goes to Cormac McCarthy. Here he is in Cities of the Plain giving his young lovers the McCarthy kind of happy ever after:

The girl to whom he’d sworn his love forever lay on the last table. She lay as the rushcutters had found her that morning in the shallows under the shore willows with the mist rising off the river. Her hair damp and matted. So black. Hung with strands of dead brown weed. Her face so pale. The severed throat gaping bloodlessly. Her good blue dress was twisted about on her body and her stockings were torn. She’d lost her shoes.

There was no blood, for it had all washed away. He reached and touched her cheek. Oh God, he said.

(I didn't even have to pay him to say that btw)

Great piece. Bad guys are way more interesting than good guys. Who would make the ultimate "Axis of Evil" dinner party? I'm going with Hitler, Osama Bin Laden, and whoever put together the Jonas Brothers and made them a thing. Bill Cosby would be my alternate.