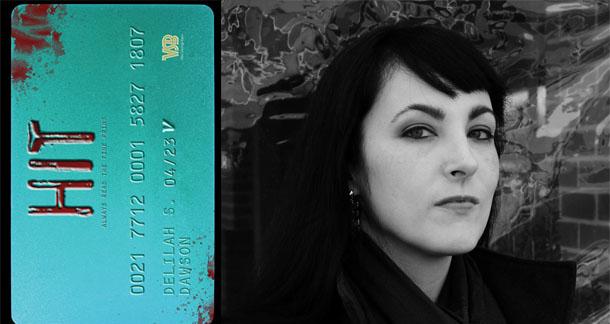 In order to save her mother, a teen is forced to become an indentured assassin in this sizzling dystopian thriller...

The first hit is the hardest.

At the beginning of Hit, Patsy's biggest rebellion so far has been yarn bombing. But when the suit from the new, bank-owned government shows up and puts a gun to her mom's chest, Patsy agrees to take on a list of ten debtors. If they don't pay up or accept the same deal, she has to kill them. If she doesn't, her mom dies. The book opens as Patsy's clock counts down to the final seconds. She has to ring a stranger's doorbell with a gun tucked into her skinny jeans, and it's the last thing on earth she wants to do.

Pulling the trigger for the first time is all but impossible—hence the trope of a kid holding a shaking rifle with a deer in their sights. When you're writing a scene like that, you have to consider where the character is coming from, what they've been taught, what they're feeling emotionally and physically. Are they nauseated? Sweating? Breathing fast? How do they feel the moment after the bang? For maximum punch, you must communicate the full, painful impact of violence. It's a life-changing moment.

Character is who we are when the clock is counting down.

When I sent Hit to my agent, her biggest concern was letting Patsy kill a stranger in cold blood while keeping her a sympathetic character. Originally, there was no ticking clock, no time limit for Patsy's stint as a bounty hunter. And that's why I added a countdown clock—because what pushed Patsy to pull the trigger had to be an outside force. It couldn't be solely her decision. We like characters who make sacrifices, who do the right thing, who take care of the people they love. And for the reader to get behind a teen girl on a killing spree, we have to understand exactly why she would kill and decide that we would make the same decision. The first thing Patsy does after her first kill? Throw up. Because even her body rejects what she's been made to do.

I didn't originally plan a love interest for my teen assassin book. I didn't want to buy into another trope—teen finds soulmate during pre-apocalypse. But then Wyatt charged out the front door in a band shirt, and I had to keep him in the picture. Suddenly, Patsy had company, and that gave her a sounding board for her feelings, a character who sees her through new eyes and who gives her the grace and mercy she needs. As a writer, you can't plan out everything that will happen, and sometimes, going with an impulsive choice yields amazing results.

I didn't originally plan a love interest for my teen assassin book. I didn't want to buy into another trope—teen finds soulmate during pre-apocalypse.

You need a reason to pull the trigger and a better reason not to.

Characters, like people, need reasons to inform their choices. They will sometimes do the unexpected, make mistakes, or purposefully do the opposite of what they've done in the past. A character is relatable and likable because we have empathy for their choices, even when they're not the choices we would make. It's the writer's job to frame each choice and carry the reader through the character's feelings and the aftereffects on their psyche. When Patsy puts a gun to Wyatt's ribs and decides not to shoot him, everything changes.

Dialog reveals so much about character. Like real people, book characters don't always tell the truth. They tell partial truths, they stop halfway through a sentence, they use metaphors, they outright lie. If dialog is 100 percent truth and elegantly stated, it's not believable. In one of my favorite scenes, Patsy fumbles while trying to communicate her feelings to Wyatt, and in response, he storms out. I had a lot of scenes like that as a teen—I didn't know how much to say, or when, or how to frame it truthfully without sounding like a cheeseball or a weirdo. While I don't like book relationships in which characters constantly storm away instead of talking out their problems, I appreciate characters who struggle to understand themselves and communicate when pushed to the limit. And I like them more when the recognize what they've done wrong and try to fix things.

Inspiration comes from the weirdest places.

Hit was inspired by the Human CentiPad episode of South Park, in which signing Apple's Terms of Service Agreement commits the user to being sewn to two other users, Human Centipede-style. I watched it, and the next morning, my iPod forced me to accept a new User Agreement or nullify the use of my device. Lose all my songs, playlists, and photos? Hell no. With shame in my heart and without reading the ultra-long, lawyer-speak document, I clicked Agree. And it occurred to me that they could hide anything in there, or in a credit card application. “User agreement can be terminated at any time” could become “User can be terminated at any time,” and the vast majority of people would never notice. That's the entire basis of Hit, and it all came from a cartoon.

Confession: I stink at numbering chapters. I have never, ever turned in a clean draft with appropriate chapter numbers; they usually go 1, 2, 4, B, 9, 9, 32. But the chapters in Hit naturally gravitated toward an unusual system: One chapter for each name on Patsy's list. That means that my full-length YA novel has 12 chapters, and some of them are much, much longer than the usual writing rules suggest. But it works.

Throwaway characters need to be real, unique, and memorable.

The writer knows their protagonist, villain, and love interest as well as we know our friends, but it can be all too easy to make side characters into caricatures or cardboard cut-outs. Patsy meets every person on her hit list, sometimes for only two sentences, but I wanted them each to be just as real as she was so that their deaths (or their reluctant agreements to become assassins) had meaning and weight. That meant that their character was shown through their homes, their sidewalks, how they opened their doors. They each had a distinct voice and a unique reaction to a teen girl in a mail shirt, holding a fruit basket and a signature machine. Each person is the hero of their own story, even people who walk onscreen and get shot.

Even the strongest characters must be weak sometimes.

My main goal in writing Hit was to craft a reluctant teen assassin who remained likable and realistic. This is not The Bride or Hit Girl. This is a poor, B-student yarn bomber who works at the pizza place to help her mom pay her hospital bills. Patsy doesn't have fight training, and the only reason she's ever held a gun is because kids in the country drink beer and shoot at Coke bottles in the backyard for fun. She had to be strong enough to do what needed to be done but vulnerable enough for us to feel how much she hates what she's doing, how very wrong she knows it is. Patsy wakes up, crying, from nightmares. She demands milkshakes when she can't stop shivering. We like to believe in invulnerability, but we all know we're not Superman. For a character to become a hero we can root for, they need to have moments where they're as raw and broken as we are.

Never, ever kill the dog.

My agent and editor had no problem with the carnage Patsy left in her wake, but when it came to hurting a dog, they waved the red flag. There's just something about the human heart that can ignore the orphaned children, heartbroken lovers, and tearful parents when a human dies in a book... but when a dog dies, GOD HELP YOU. So there's a spoiler: the dog doesn't die.

She might get shot a little, though. You'll have to read it to find out.

Delilah S. Dawson is the author of Hit, Servants of the Storm, the Blud series, and a variety of short stories. See them all at www.whimsydark.com. Her classes for LitReactor include NaNoFixMo, Worldbuilding 101, and the upcoming Turbocharge Your Characters, which will build on some of the points above to create living, breathing, dynamic characters through action, dialog, and telling details.

Hit sounds interesting. Thanks for relaying your experiences and saving the dog.

Even Hitler loved dogs, so? I-would-saaaaay? We're  genetically programmed to like them  and if you don't. You need to do some  SERIOUSSOULSEARCHINGBRO.

Also, I like the part  about the gun tucked in her skinny jeans. That is cool. And I was thinking. I'm actually going to buy the audio book (version), so I can listen to it while in the shower.

DaVonne Rochelle from Philadelphia is reading The Art of Asking by Amanda Palmer April 30, 2015 - 12:04pm

Very much enjoyed this column. I ordered your book for our YA collection at our library, I'll have to find it and read it. Love that it was inspired by the Human Centiped episode of South Park. I loved that episode. haha

Joshua Chaplinsky from New York is reading a lot more during the quarantine April 30, 2015 - 12:08pm