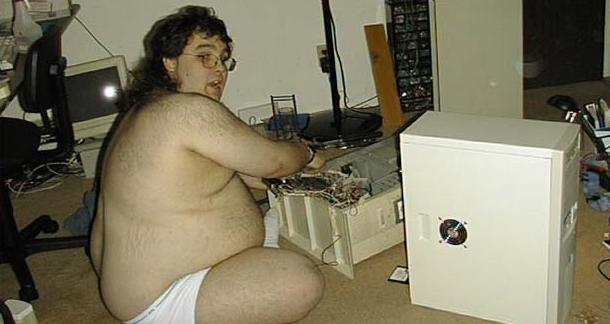 Valentine's Day, or as the more unoriginal among us like to call it, Singles Appreciation Day, is fast approaching, and if you're like 99.9% of people who regularly read (or write for) this site, chances are you are, once again, desperately, desperately alone. Don't feel bad, you never really had a chance. After living a life so devoted to writing, words, books, and other things associated with pen and paper, how can anybody ever expect your talents to translate over into real life?

Fear not, for Uncle John, relationship guru (and single guy) has the answer to your lovelorn prayers. My columns focus on technology—a lot—and this month will be no exception. For those of us under the age of 30, living in a major metropolitan area, or both, dating apps are pretty much a standard part of the equation these days. Chances are, you yourself have some sort of dating profile or app, even if it still has photos from that one month two years ago when you actually went to the gym regularly (we'll get to that in a second). Well, there's good news, my fellow pale and socially maladjusted friends! You can use your skills as a writer and a reader to help you snag a date, you just have to know how to market yourself—just like any writer does! Without further ado, here are some tried and true tips to turn next year's February 14th into a star-lit dinner for two rather than an evening spent crying in the glow of a computer monitor over lukewarm mac 'n' cheese.

You can use your skills as a writer and a reader to help you snag a date, you just have to know how to market yourself—just like any writer does!

Nobody wants to admit it, but people are shallow. It's true of readers, it's true of writers, and it's especially true of people trying to hook up over the Internet. The first thing anybody is going to do when they look at your profile is skip straight to the pictures and decide whether or not you fit the first criteria for sweet, sweet lovin'. The temptation will be strong, but it's of the utmost importance that you post attractive but accurate pictures. Why do you think Hunter S. Thompson kept updating his jacket photos every time he released a new book? Because in his heart of hearts, Thompson was an honest man, and he knew that he had to go full on Raiders of the Lost Ark and expose his drug and booze devastated mug for all to see, lest potential readers be confused and disappointed at the 438 pages of maniacal dribblings that awaited them. In that same vein, you might be able to attract a weekend rock-climber with a matching body by swapping your current pics out for a sleeker retro model, but don't be surprised if you don't score a second date.

Remember all those hours you spent, sitting alone in the racks of a bookstore or library, reading the 138 pages of plot synopsis attached to each potential book you wanted to buy? No? Me neither. That's because nobody wants to spend more time reading your life story than they'll spend talking to you on the actual date. Furthermore,  while this is still a bad move to pull with a book jacket, the person who wrote the copy on that jacket flap is a trained professional who has been doing their job competently for years. You, on the other hand, are so bad at writing your own life that you've resorted to begging for scraps on the Internet. I digress. The point is, as with any good story or summary, brevity is key. Hit the major points while still leaving an air of mystery; you don't want to go into the date with no trump card to throw down.

Some fantasy sample back-jacket copy from The Grapes of Wrath, if Steinbeck had written it in the age of online dating profiles and was an idiot:

The heart-wrenching story of a family from Oklahoma...yeah, he already has a family and he's from Oklahoma. If you aren't into that, well, you can just fuck right off, right here and now! I'm so sick of all these lying bitch readers saying they want the story of a guy who is responsible and wants to settle down but once you let it slip that your protagonist has several starving kids and can't find work as a sharecropper they can't get to the hills fast enough. Jesus. Anyway, Tom Joad has a great personality, but that doesn't really matter because this whole publishing industry is bullshit anyway. So read the book, or don't. Whatever.

Would you ever in your right mind want to do anything for somebody who had decided to treat you as hostile before they had even met you? Of course not. It's no secret that online dating attracts a lot of people who feel frustrated with more traditional means, but getting in someone's face before you even know they exist is a great way to put a bad taste in someone's mouth and make yourself look crazy. Really, if you're in a place that you're angry enough with the opposite sex to be bitching about it online to anonymous strangers, some of which theoretically want to sleep with you, then you are in a very bad place and should probably work on yourself before you inflict your joyous personality on some unsuspecting lady/fellow who just wanted to make awkward small talk over sub-par coffee. Approach a date the same way you would approach a book, with an open mind, and not turning over all the ways in which the story might be disappointing, or might run out and leave you with three kids after 4 months of bliss (I'm not bitter).

There are many surefire ways to not finish or enjoy a book, but one of the best ways to guarantee a lifelong relationship of animosity with a novel is to read a few chapters, then decide you're tired of all the pussyfooting around and skip right to the end. Likewise, if you actually land a date, and it seems to be going well, it's normal to get a few butterflies and wonder if it could lead to something better. That's a normal question to ask somebody after you've been dating for a while. It's not a normal thing to ask somebody at the end of your first date, or to grill them about before you even meet in person.

On the flipside, don't stay mired in something you know is bad for both of you. There's no shame in quitting, and if you're halfway through Moby Dick and realizing you loathe every second of reading it, well...nobody would think less of you for pulling the plug, except maybe Herman Melville, but he's dead. It's all a balancing act, is what I'm getting at.

Above all, as with most things in life, have fun. Don't treat online dating as some chore you have to get through in order to finally crack the code and find "the one". That kind of attitude will leave you used and abused and empty-handed at the end of it all. Remember, just because the dates are happening online and you're handed a dossier about each person you meet doesn't mean it's one-stop-significant-other shopping. Have you ever told yourself you were going to get really well-read, bought a whole bunch of standard classics, and then slowly grown to resent them as you watched them sit, day after day, unread by your nightstand? This is kind of like that, but you're putting your unrealistic expectations on living, breathing people, not just words smeared across dead trees. Have a little patience and enjoy the ride, and you're likely to enrich yourself and the people you go on dates with, even if things don't work out exactly the way you planned.

As we get older more and more things will pop up in the universe that make us confused, grouchy, and feel like we're hopelessly out of touch. Those are all normal reactions to change, but they have to be followed by some sort of acceptance, however begrudging it might be, and an earnest effort to try and make the new way work. I'm not saying online dating is the key to the future, but the "stigma" that used to surround it is all but gone now, so if you want to hatch some podlings or just have somebody to talk to on a cold February night, buckle down and step up your online dating game. Remember, being too literate is never a good excuse for anything, but it's especially pathetic when you say you can't hack it in a format that's almost entirely based around writing. Put that liberal arts degree to the real-life test, get out there, and go on some dates!

Note: do not try and squeeze in a date in time for this year's Valentine's Day. That will only end in heartache.

A snappy, literary-sounding tag line on Tinder has been working for me.