How to Reconcile the Writing Life and Faith 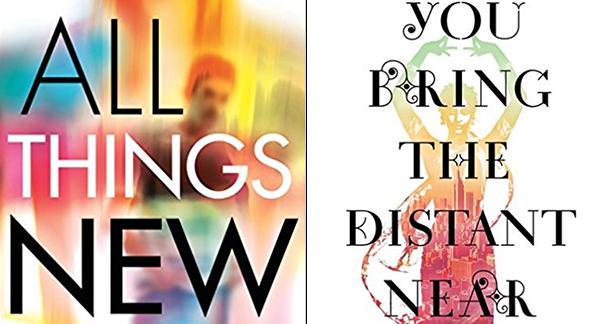 Faith has been an important aspect of my life since I was a child. My family did, in fact, pack everything up and move to Italy because we believed it was God’s calling on our lives.

Equally, I’ve always been driven by writing. It’s weird, but when I think about writing, I think about it less of as a thing I do, and more as something nebulous and existent that drives me. It’s a force within my soul, pushing me to output my thoughts through strung-together words and sentences. It’s a living being residing in my chest, and if I don’t write, the Writing Being gets anxious and angry and forces me to start writing — something, anything, even just a list of things to write in the future.

It wasn’t a stretch to begin to imagine that writing was my calling; it was an intertwining of faith and art, two things that have truly driven my life.

As a kid and a teenager, I was confident in this. And then, as adulthood encroached, my certainty about my faith began to fray. Could I truly cling tight to the God of my childhood and be a writer? Weren’t the two mutually exclusive? How does one achieve success on a broad level when one is pushed by a specific God?

These were the questions that plagued me as I continued to write. I began blogging about books and, after my journalism school dreams were put on hold because of deteriorating mental health, I practiced my interviewing skills by profiling writers. One thing led to another, and soon I was interviewing published authors, receiving ARCs of their books, and pitching those profiles to real-live sites.

Being a writer is more than a career…it is a vocation. A calling. A state of being.

That’s what led to reading All Things New, by Lauren Miller. Lauren’s publicist, whom I’d connected with while trying to interview the amazing Sandhya Menon, sent me a copy of the book, and I raced through it. I was loving it; not just because it’s a book that deals with mental illness and scars that are deeper than skin, but because toward the end I started noticing some faith elements.

My heart raced. Would I truly be reading a book in which a young girl finds faith? Was this even possible?

Turns out, it was. All Things New was published August 1, 2017 by Three Saints Press, and it follows a girl who has to come to terms with her own anxiety and the spiritual element of the world. It’s the kind of book I had to Tweet about, because, well, I’m me.

And I was so grateful that I got to chat with Lauren, because the burning question on my mind was how did you do it? How did you write a book about faith and publish it? Especially in the contemporary young adult market, which doesn’t exactly lend itself to writing about faith, of any kind.

“[It was] SO HARD,” Lauren said over email. “It’s hard because everyone is so skeptical of people of faith right now, assuming that because there are faith elements, I must have an ‘agenda’ or a ‘message’ I’m trying to communicate. I don’t. I’m just trying to write stories that reflect my experience of the world and the people in it, and for me, God is a part of that.”

Lauren shared that she’s a Christian and she believes in a God who affects the world, but that in writing the book she wasn’t trying to just replicate herself in the characters.

“I tried to create authentic characters who struggle with their own beliefs and aren’t certain they have all the answers (because none of us do),” she said. “It was a gamble for me to let [the faith elements] shine through the way that they do, and at first I hesitated to do it. I kept a lot of it out. But in the end, that didn’t feel true to the narrative. I realized that I was being less authentic as a writer by keeping those elements out.”

Honestly, that was so inspirational to me. Because I’ve always thought that to be a good Christian who wrote, I did have to have an “agenda.” As a teenager writing novels, I felt intensely guilty if they didn’t involve characters being Christian or at the very least becoming Christian. I thought the only way to view writing as a calling, on par with my parents’ calling to serve in Italy, was to write overtly Christian narratives.

Lauren’s answers truly helped, and a few weeks later I got the chance to read Mitali Perkins’ You Bring the Distant Near, a gorgeous, multi-generational tale that truly encompasses what the “American Dream” really is. And I was even luckier to get to chat with her on the phone.

While doing some research beforehand, I discovered that Mitali is also a Christian. This was an a-ha moment for me, because there are spiritual and faith elements in You Bring the Distant Near, although not so overt that I would have assumed anything about the author’s faith without reading her own words on Christianity Today.

While chatting with Mitali, who, by the by, is an absolute pleasure, I didn’t even have to outright ask her how she writes while being a Christian. Her faith is woven into her very words, her very understanding of what writing is.

She described an 11-year waiting period between her debut and sophomore novels, and how during that time she struggled to identify as a writer. However, upon the publication of her second novel, she said she felt convicted to truly call herself a writer, an author.

“Maybe this is a calling,” she said, using a term that sent shockwaves through my system. “Maybe this is something I should pay attention to and I should steward it and care for it the way it deserves…I did a retreat, and I was able to have a…time of prayer, and I really felt like it was time to say, this is my calling, I wanna be a writer, I wanna be an author.”

I was so moved by her words! It was like hearing a message straight to my soul, reminding me that being a writer is more than a career…it is a vocation. A calling. A state of being.

“[It was] something I felt like I needed to be faithful about,” Mitali added. “If it was definitely something I was intended to do, then I shouldn’t be all squirmy and apologetic about it and embarrassed, I just needed to…do the best I could do, even through the books that didn’t sell and the bad reviews and the rejections and the…it’s not an easy career, but because it was intentional and a calling, I just felt like I’ve had a lot of strength to endure through the hard things cause it’s not about those things, it’s about being faithful to the vocation.”

She went on to share her idea that God cares about stories — an idea I’ve always shared. To me, the God I serve is a storyteller. I mean, hello, his holy text is literally a series of stories about protagonists in settings with conflicts and quests. How much more of a storyteller can you be? That’s how I’ve always related to God.

And here was someone else, someone who was successful and talented and not necessarily showy about her faith, telling me she agreed!
“Jesus spent a lot of time telling stories, he could have done a lot of different things but he told stories,” Mitali said. “So…if God is calling you to tell stories, that’s something He cares about, and I need to pay attention to it.”

I still don’t know all the details of how to be both a writer and a person of faith. I do know, though, that thanks to my conversations with these two writers, I don’t need to have an agenda and I don’t need to be afraid to adopt my identity as a writer, or be ashamed of my weird idea that writing is a beast in my chest…it’s my calling. My vocation. My reason for being. I’m going to embrace it and stop being scared of doing something wrong.

If my characters become Christians by the end of the book, fine, as long as I’m not just doing that to “preach,” as long as that’s true to who they are and the story. If they don’t, that’s also fine. Because like Mitali said, my God is a God of stories. The good, the bad, and the ugly.