How to Build a Novel Soundtrack 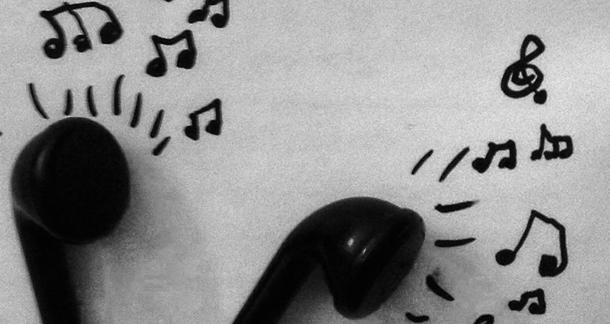 I think creating novel soundtracks is a pretty common activity for authors. Most of you already do this. However, exactly one person asked me for advice about this particular subject, so obviously I’m going to milk this into a new article.

All right, here we go.

First off, why have them? Well, forming a soundtrack as you write your novel can help craft your desired atmosphere. Music is magic and has a way of influencing you more than you probably think.

However, coming up with a complete soundtrack can also be beneficial for marketing your book, too. For my first novel, Toxicity, I spent a ton of time crafting the ultimate soundtrack. Toxicity has fifty-three chapters, and I wanted to find a song that best represented each chapter. So, yes, I created a soundtrack with fifty-three songs on it. I didn’t anticipate just how crazy that was until after I finished, but seriously, that’s way too many songs.

Music is magic and has a way of influencing you more than you probably think.

I started off by going through my novel and briefly jotting down notes about each chapter. I wrote down important themes and atmospheres found in the book. Fortunately I already had a bunch of songs in mind that I thought would work really well. Hell, some of these songs even inspired sections of the book back in the early stages of the writing process.

After outlining the chapter themes and events, I browsed both my memory and my music library to search for songs that could possibly fit each individual chapter. I tried to come up with three-to-five songs for each chapter, and then forced my girlfriend to listen to all the songs and help me pick out the best ones. The majority of the time, she ended up picking my first instinct, which further developed my ongoing suspicion that my girlfriend is actually a figment of my progressively decaying imagination.

Forming the Toxicity soundtrack, I carefully examined all fifty chapters—actually, fifty-three chapters, if you include the three-part prologue—and determined what song best captured the essence of each chapter. Ideally, the reader should listen to each song either right before, during, or directly after reading the specified chapter. Fortunately, YouTube exists, so I didn’t have to worry about people not having access to the songs.

The soundtrack’s main goal is to better emphasize the book’s atmosphere while also helping my readers discover new music. I included songs by popular artists pretty much everybody is aware of, like Metallica and AC/DC, but I also tried to include little known bands like Cloud Cult and The Red Paintings. There is also a lot of Eels on it, but come on, you can’t have a successful soundtrack without Mr. E. 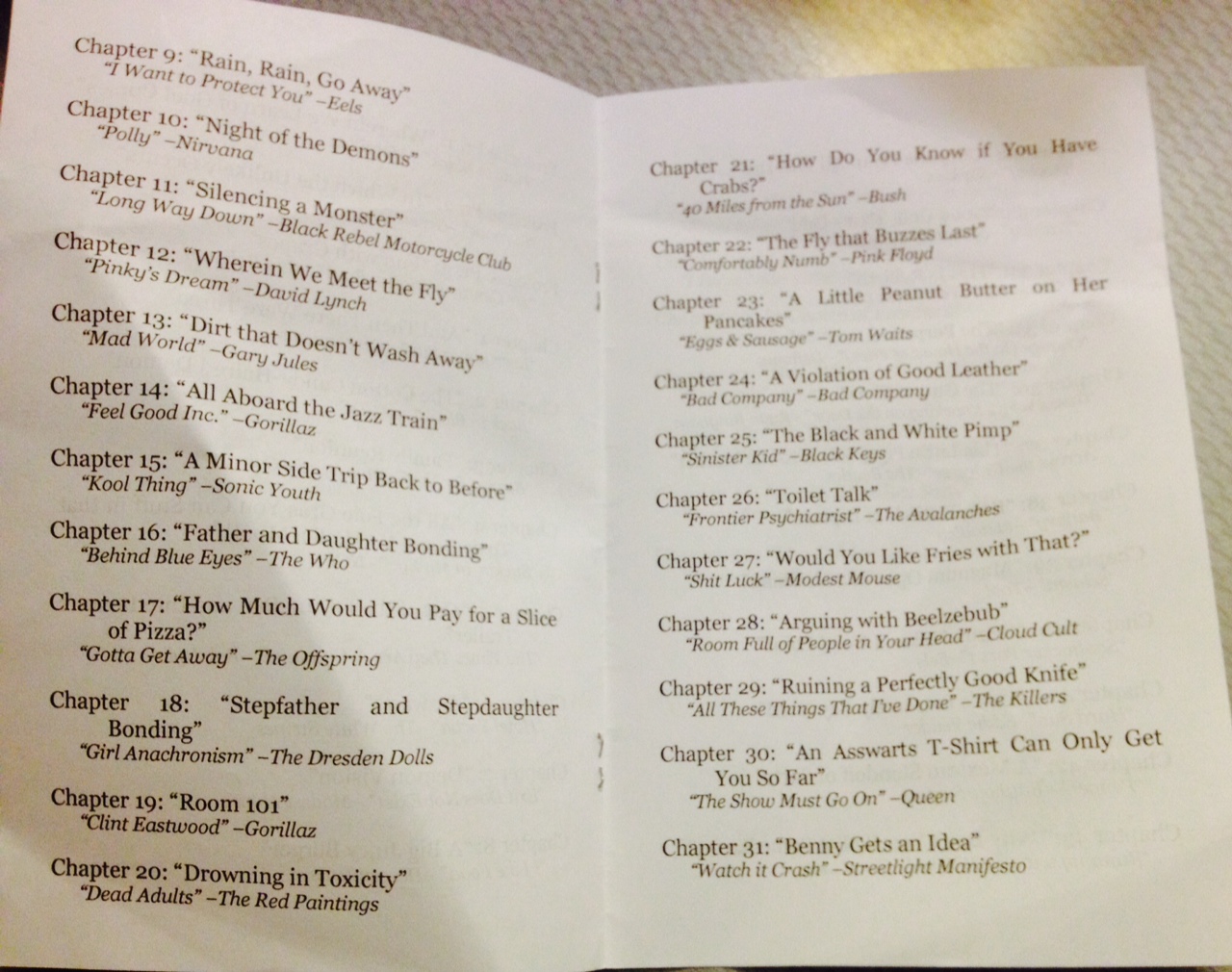 I also recommend blogging about each track and explaining why you chose the songs you did. I started doing this for Toxicity, but I gave up because holy crap, you guys, fifty-three songs is just too many songs to review. I’ll be doing a new soundtrack for my next novel, coming out later this month, and I definitely won’t pick as many songs this time.

Another advantage of having a soundtrack is being able to connect with people who dig the same music you do. For instance, I am a huge Modest Mouse fan. At a recent convention, I was giving out free soundtrack pamphlets I’d printed out, and one random girl passing by noticed a few tracks by Modest Mouse on the list. She immediately gasped in excitement and bought a copy of my book. Of course, this could also work against you, if a person happens to despise the band listed in your soundtrack—that’s why I tried to list a variety of genres and artists I like. But if somebody hates Modest Mouse, then I don’t want them buying my book, anyway.

That was a joke. Please buy my book. My children need school clothes. They can’t keep wearing cardboard box cutouts.

Of course, there are probably copyright laws about these soundtracks. That’s why I cleverly inserted the word “unofficial” on the pamphlet cover. 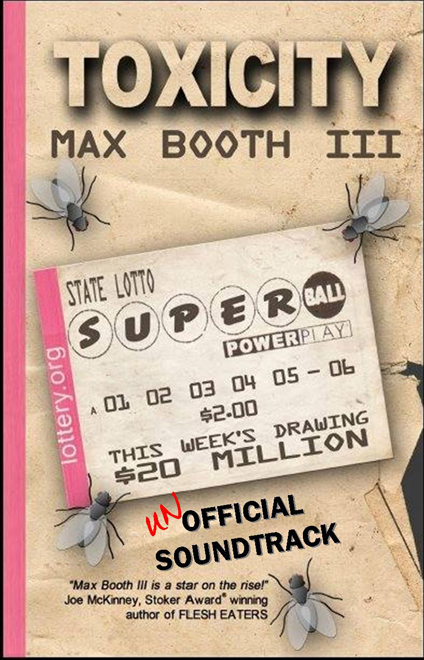 Although, I have no way of knowing if that makes it legal. I figured I would take my chances. You probably shouldn’t be like me. You should definitely look up the law first.

I do know two things for sure, though: 1) Don’t use actual lyrics from the songs and 2) Don’t include anything by Nickelback, because nobody is going to buy that shit.

The Mind is a Razorblade

I'm writing a novel about my time working in a supermarket, so I've compiled a soundtrack of all the songs I've heard played over the store's radio/intercom.

I find it interesting you did it per chapter. Something to consider.

I might have to try a handwritten version. Of course I have sheet music from songs I've written I might use as well. I might try that again, if I can get finale songwriter.

I became obsessed with doing this sort of thing, except I do very long chapters so I tend to use more than one song per chapter, and I always ended up mixing the playlist up because the songs sounded crap in chapter order, and often they wouldn't be a perfect match to my story anyway. The playlists wound up being music that inspired certain sections rather than retelling the exact story.

I once tried making a list that did tell the story, and used music I thought that character would listen to. That was damn hard, and I ended up having to use a couple of tracks my protagonist would have hated, but maybe that was the point. It's not all about what people like.

Dino Parenti from Los Angeles is reading Everything He Gets His Hands On September 6, 2014 - 7:09am

I'm working on tightening up my short story collection, and along with a small illustration I plan to include under each title, I think I might include a song for each story. Thanks for the inspiration!

I've considered coupling this with a chapter-by-chapter outline. I'm just unsure how to do it, as it's one of those multiple narratives I'm wanting to do.

Ghostword from Cornwall is reading 'The Core of the Sun' by Johanna Sinisalo September 8, 2014 - 11:58am

I'm in two minds about this, on one hand it does sound like an intreasting and fun thing to do.

On the otherhand, there is the worry that you'll select what might be popular instead of what you like.  I admit my tastes are in the minority here or would go all over the place.   Also, what happens if you select the track, then you have to change the chapter.  Do you then have to go back and change the song as well?

Thank you, for introducing me to Cloud Cult and The Red Paintings. I just spent some time on YouTube checking them out, and I love them.

I build soundtracks as well, but not in the same way. Sometimes a song will give me the idea for the story/characters and be the starting point for the entire creation of the work. Other times, I will hear a song that reminds me of the characters/story, and I'll add it to a playlist in iTunes. While I'm writing or editing, I listen to the playlists to bring back the emotions I associate with the specific songs. However, I've recently discovered that I have some non-project related music that I enjoy writing to regardless. My favorite, at the moment, is Kodaline's album In a Perfect World and The Head and the Heart's album Let's Be Still. When I did NaNoWriMo in 2012, Fm Radio's album Out of the Blue influenced my writing and became the unofficial soundtrack. Then I went to the Rockabilly convention, Viva Las Vegas, and suddenly that music took on a pivotal role in my project. My music taste is, um, ecclectic.

Spotify is great for this, its a free/sharable way to build cool book soundtracks