How to Approach the Second Draft of Your Novel-in-Making 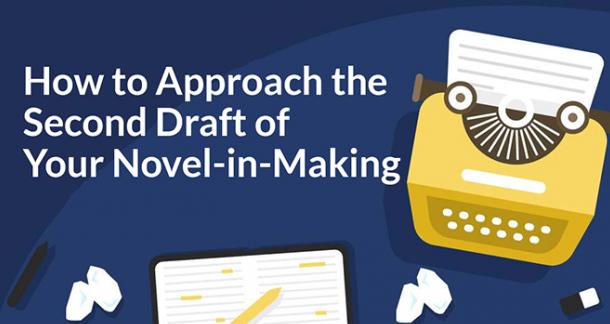 Say you’ve reached the other end of a long tunnel. It’s been a hard and difficult slog until now, but you see a dawning light as you reach the last few pages of your story and can finally type “THE END.”

Is it time to pop open the champagne? Yes. Grab that bottle of Veuve Clicquot, kick up your feet, and celebrate the fact that you now have a first draft. Just don’t get too comfortable, as you’ve got a mountain of editing ahead of you.

This begins with the second draft — a daunting task, to be sure. This will likely be the first time that you reckon with your story as a whole, and it may not be quite as magnificent as you’d thought when you were writing it.

But don’t fear: as C.J. Cherryh wrote, “It is perfectly okay to write garbage — as long as you edit brilliantly.” The point of the first draft is to get all of your thoughts onto paper, and the purpose of a second draft is to refine it so that you’re actually saying what you want to say. Here are five tips on how to approach the second draft of your novel-in-making that will hopefully help you through the process.

1. Allow yourself some time between the first draft and the second draft

Grab that bottle of Veuve Clicquot, kick up your feet, and celebrate the fact that you now have a first draft. Just don’t get too comfortable, as you’ve got a mountain of editing ahead of you.

The best advice I can give on this is, once it's done, to put it away until you can read it with new eyes. Finish the short story, print it out, then put it in a drawer and write other things. — Neil Gaiman

A surely unenviable task is expected of all authors from the get-go: to build a hundred (and more) pages of engaging story out of thin air. It’s a challenge of herculean proportions, and to pull it off, most writers have to wholly sink themselves into the text that they’re creating — obsessing over everything from the characters and plot to the word choice.

This is a superpower when it comes to the first draft — one that enables writers to emerge with a fully-formed story clutched triumphantly in hand. Not so much when it’s time for the second draft and you’re asked to dismember everything you’ve written in order to make it even better.

So, instead of blood, sweat, and tears, a second draft demands the clinical objectivity of a surgeon. To be able to pass such judgment on your own writing, you must put your manuscript in a drawer for a solid length of time. Pretend that the drawer doesn’t exist. (Or that it exists in an unreachable alternate dimension, in a feat befitting of the best sci-fi books out there.)

Out of sight, out of mind, as the saying goes, right? That is — until the day you can pull it out again and read it as an (almost) brand-new reader.

2. Don’t get too attached to the text

Reading with new eyes also comes with an asterisk that’s important enough to get its own point: don’t get too attached to the text. Everything in your first draft is fair game for improvement. This includes dear characters that nevertheless fail to add to the story, incredible plot twists that don’t actually make sense, beloved turns of phrase that might turn out surplus to the plot, and anything else extraneous. As Stephen King wrote in On Writing (and as many other authors have echoed), “Kill your darlings.”

Of course, it hurts to be that ruthless, so it’s best not to get too attached to anything. Remind yourself that it’s for the good of the story, and prepare to head into battle with your sword (or surgical knife — whichever you prefer) at the ready.

3. Re-examine the “core” layer of your story

'An Education' was a complicated piece of work because it came from a tiny essay, so it took me a while to find the story I wanted to tell and the characters I wanted to tell it about. That really only emerged after four or five drafts. — Nick Hornby

Many people wonder how many rounds of editing is enough. My answer might be unsatisfying: however many it takes. Generally, however, I recommend at least three to four passes at the manuscript.

This means that you can save the thorough proof (which is concerned with more granular details such as word choice or phrasing) for later. Your second draft, instead, is your chance to look at the big picture and strengthen the “core” layer of your story: your character arcs, plot and conflict, and, most importantly, your central theme. How does each element come across on paper? Have you conveyed each in the way that you intended? Does everything come together to form a cohesive end product?

Second drafts are an opportunity to identify and improve your story’s structural issues in particular. Try re-ordering things — you’ve gotten everything that you wanted to say out on the page in your first draft, which is great. Now, spend some time examining it critically and asking yourself if everything is in the right place.

No author dislikes to be edited as much as he dislikes not to be published. — J. Russell Lynes

Perhaps most importantly, get someone else to read your second draft. Listen to what they say and follow their advice if they point out something that isn’t working for them. I can’t emphasize this enough. At the end of the day, your readers’ opinions are most important and valid, and these will be your very first readers.

Ultimately, a professional developmental editor is the best-qualified person to read your draft and offer constructive (and unbiased) criticism of it. Their advice for your manuscript will be backed by years of knowledge and experience working at traditional publishing houses.

That said, you needn’t hire an editor if you don’t have the budget for one — simply grab a friend who you trust and ask them to do you a favor, or pop into a writing group on Facebook and see if any of your fellow authors are willing to do a beta read for you. Just don’t skip this step, because it’s incredibly vital if you want to produce a well-balanced, readable book.

5. Let yourself feel good about the first draft

Now let's say you've finished your first draft. Congratulations! Good job! Have a glass of champagne, send out for pizza, do whatever it is you do when you've got something to celebrate. — Steven King

Finally (and once again), don’t miss out on the chance to congratulate yourself on finishing your first draft in the first place! By doing so, you join an exclusive club: only so many people in the world even make it to this point. Most folks are far behind you, still languishing on a blank page.

Let yourself feel good about the first draft. The finish line — and the day that you can read your own book on your Kindle — is much nearer than before, so don’t lose motivation now. Ride that wave of positive energy as you sit down to work on your second draft. You’re already that much closer to your goal of a beautiful book.